THE SPONGEBOB MUSICAL to Play the Forrest Theatre 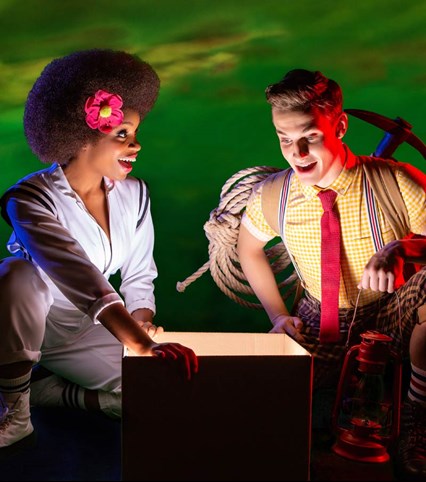 May 21, 2019 – NETworks Presentations is pleased to the upcoming North American Tour of Nickelodeon’s THE SPONGEBOB MUSICAL. This explosively imaginative production will launch at PROCTORS in Schenectady, NY this September before bringing Bikini Bottom and its beloved residents to previously announced engagements in Boston, Los Angeles, San Francisco, Toronto and the Forrest Theatre in Philadelphia

“Wonders pour from the stage in a ravishing stream of color and invention” (Time Out New York) as Broadway’s best creative minds reimagine and bring to life the beloved Nickelodeon series with humor,  heart and pure theatricality in a neon-sparkly “party for the eyes and ears” (Daily Beast). Be there when SpongeBob and all of Bikini Bottom face catastrophe—until a most unexpected hero rises to take center stage. This “creative explosion” (Broadway.com) is “nothing short of genius,” says TheaterMania, so bring the entire family to celebrate friendship and cooperation and learn the power of unity and inclusion.

The Original Cast Recording is available now from Masterworks Broadway wherever music is sold and streamed.

Explore the depths of theatrical innovation in THE SPONGEBOB MUSICAL, 2018 Best Musical winner of the Drama Desk and Outer Critics Circle Awards, where the power of optimism really can save the world.

SpongeBob SquarePants  launched on July 17, 1999, and has reigned as the number-one kids’ animated series on TV for the last 17 years, generating a universe of beloved characters, pop culture catchphrases and memes, theatrical releases, consumer products, a Tony Award®-winning Broadway musical and a global fan base.  SpongeBob SquarePants is the most widely distributed property in Viacom International Media Networks history, seen in more than 208 countries and territories, translated in 55+ languages, and averaging more than 100 million total viewers every quarter.  SpongeBob SquarePants is created by Stephen Hillenburg and produced by Nickelodeon in Burbank, Calif.  The character-driven cartoon chronicles the nautical and sometimes nonsensical adventures of SpongeBob, an incurable optimist and earnest sea sponge, and his undersea friends.