Sean Hayes to Star in GOOD NIGHT, OSCAR on Broadway 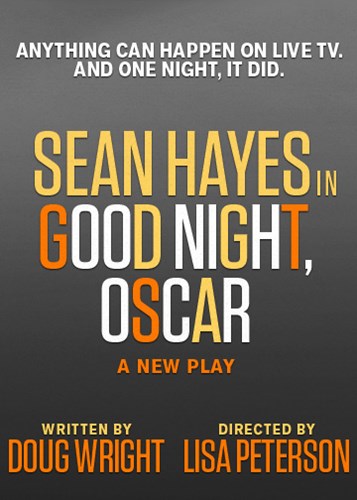 A New Play by Doug Wright

At the Belasco Theatre on Broadway

In Good Night, Oscar, Sean Hayes plays Oscar Levant: Hollywood actor, concert pianist, and the most subversive wit ever to appear on television during its Golden Age.

It’s 1958 and Jack Paar is hosting “The Tonight Show.” He’s booked his favorite guest, a pundit as hilarious as he is unpredictable: Oscar Levant, who once famously proclaimed, “There’s a fine line between genius and insanity, and I have erased that line.”  In 90 short minutes, Oscar will have audiences howling, censors scrambling, and - when it’s all over - America will be just a little less innocent than she was before.

Other cast members include Emily Bergl (Broadway’s The Ferryman, Cat on a Hot Tin Roof, TV’s “The Marvelous Mrs. Maisel” and “Desperate Housewives”) as June Levant; Peter Grosz (TV’s “Veep” and “Curb Your Enthusiasm”) as the network executive Bob Sarnoff; Ben Rappaport (recent Broadway revivals, Fiddler on the Roof and Picnic, TV’s “Outsourced” and “For the People”) as TV host Jack Paar; and John Zdrojeski (Off-Broadway’s Heroes of the Fourth Turning) as George Gershwin.  Additional casting will be confirmed soon.

The show’s producers said, “The stars have aligned to bring the brilliance of Sean Hayes together with a superb cast, director Lisa Peterson and Doug Wright’s remarkable new play.  Good Night, Oscar celebrates the unique and glorious talents of a man whose humor and pathos continue to have a deep resonance in our culture today.”

Sean Hayes said, “I’m thrilled for Broadway audiences to experience Good Night, Oscar.  Oscar Levant was a multi-faceted pioneer, from concert pianist to infamous raconteur.  It’s an honor to be portraying one of my heroes.”

Playwright Doug Wright said, “Though he's somewhat forgotten by today's audiences, Oscar Levant was a startling phenomenon in his own time; following a stellar concert and movie career, he became a celebrated pundit, holding forth on the chat shows of the 1950's.  A brilliant, often searing raconteur, he was the first celebrity to offer up his personal demons for the sake of entertainment. Time and again, Oscar challenged our notions about the acceptable boundaries of comedy, and - in doing so - revealed the psychic costs of offering up one's life for public consumption.  In an age where every TikTok user and internet influencer is striving for celebrity, Oscar's story is ripe for re-examination.”

Director Lisa Peterson said, ““Doug has written a darkly funny, searing portrait of a complex American entertainer, Oscar Levant.  And Sean is inhabiting Oscar with such unflinching honesty that it’s almost shocking. I love that this is a story set at the dawn of television—I feel we’re really talking about the birth of the same culture that consumes us now, with all of its delights and all of its terrors. I can’t wait to share it with more audiences.”

The Chicago Tribune said Good Night, Oscar is “blistering and hilariously funny. A master class on the nature and value of satire. Sean Hayes delivers a stunner of a lead performance: moving, empathetic, deeply emotional and slightly terrifying.”

WTTW TV said Good Night, Oscar is “riveting” and went on to say that “Sean Hayes soars and is so compelling, and so real, that you might begin to wonder if Levant has been fully reincarnated.”

Sean Hayes (Oscar Levant) Sean originated the title role in Good Night, Oscar last year at the Goodman Theater in Chicago. He is a three-time Emmy Award winning actor, host and producer.  He is best known for his role as Jack McFarland on the NBC sitcom “Will & Grace,” for which he won a Primetime Emmy Award and four SAG Awards, along with six Golden Globe nominations. He is also known for his work on Broadway including An Act of God and Promises, Promises for which he received a Tony Award nomination for Best Performance by a Leading Actor in a Musical.  Hayes is the co-founder of Hazy Mills Productions, the television production company behind several hit shows such as “Hot in Cleveland,” “Grimm,” “Hollywood Game Night,” and “History of Comedy.” He currently co-hosts the #1 comedy podcast in the world, “Smartless,” as well as a second podcast, “HypochondriActor.”

Emily Bergl (June Levant) received a Jeff Award nomination for her role as June Levant at the Goodman Theatre. Broadway: The Ferryman, Cat on a Hot Tin Roof, Touch of the Poet, The Rivals, The Lion in Winter. She is best known for her recurring roles on TV in “The Marvelous Mrs. Maisel,” “Shameless,” “The Knick,” “Gilmore Girls,” “Desperate Housewives,” “American Crime,” “Southland,” and “Men in Trees.” Film credits include Fur: An Imaginary Portrait of Diane Arbus, The Rage: Carrie 2, and the upcoming Escaping Ohio. As a solo cabaret artist, she has headlined at the Carlyle, Oak Room, and Feinstein’s.

Lisa Peterson (Director) is a two-time OBIE Award-winning director. She wrote and directed An Iliad with Denis O’Hare (NYTW, OBIE and Lortel Awards).  Directing work includes the world premieres of plays by Tony Kushner (Slavs, NYTW), Beth Henley (Ridiculous Fraud, McCarter), Donald Margulies (Collected Stories, MTC), Naomi Wallace (Trestle at Pope Lick Creek, NYTW), Jose Rivera, Culture Clash, Luis Alfaro, Chay Yew, Miranda Rose Hall and many more.  She has directed classic plays at theaters across the country including Arena Stage. Guthrie, Hartford Stage, OSF, Baltimore Center Stage, Seattle Rep, ACT, and South Coast Rep. Lisa was Associate Director at Berkeley Rep for three years, Resident Director at CTG for ten years, and Associate Director at La Jolla Playhouse for three years.  She has developed many new plays at the Sundance Theatre Lab, where she served as the Guest Artistic Director in 2019, as well as the O’Neill Playwrights Conference, the Playwrights’ Center, and Ojai Playwrights Conference. She is a recent recipient of the Gordon Davidson Award for Lifetime Achievement. Upcoming projects include The Waves, adapted from Virginia Woolf; The Song of Rome, with Denis O’Hare; and The Idea of Order, inspired by the poetry of Wallace Stevens and written with Todd Almond.

Oscar Levant (1906 -1972) was an American concert pianist, composer, actor, and raconteur who eventually became one of the most celebrated and sardonic wits of his era. The son of Russian immigrants, Levant moved from New York to Hollywood in 1928 where he met and befriended George Gershwin. Over the next two decades he composed the music for more than 20 movies. At the height of his popularity, Oscar Levant was the highest-paid concert artist in America. Levant's 1945 recording of "Rhapsody in Blue" remained one of Columbia Records' best-selling albums for decades and the first exposure for many to the Gershwin masterpiece. From the 1930s through the mid-1950s, Levant appeared in a number of feature films, often playing a pianist or composer including major supporting roles in the notable Metro-Goldwyn-Mayer musicals The Barkleys of Broadway (1949), An American in Paris (1951) and The Band Wagon (1953). In 1938 and 1939 Levant worked on Broadway as a conductor (filling in for his brother Harry) on Kaufman and Hart's The Fabulous Invalid and conductor and composer for The American Way, another Kaufman and Hart production. Levant became well known to a wider audience as a regular panelist on the radio quiz show “Information Please” in the late 1930s and 1940s. This led to a series of radio and television appearances including NBC Radio's “Kraft Music Hall starring Al Jolson,” NBC's “Who Said That?” and between 1958 and 1960, he hosted a television talk show on KCOP-TV in Los Angeles, “The Oscar Levant Show,” which was later syndicated. In time, Levant's reputation as a caustic, sometimes provocative, humorist eclipsed his former glory as a pianist.