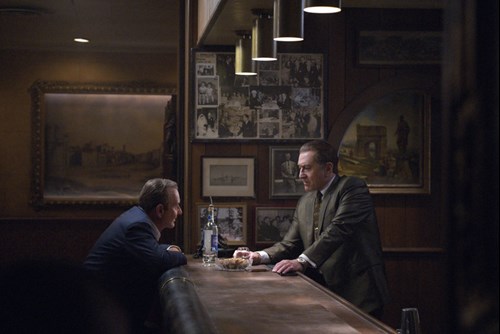 Hollywood, Calif. - October 7, 2019 - Netflix today announced Martin Scorsese’s The Irishman will have a unique and historic theatrical run at the celebrated Belasco Theatre in New York. The Irishman, starring Robert De Niro, Al Pacino, and Joe Pesci, will screen at the famed theater from November 1 - December 1. This will mark the first time the Broadway theatre has welcomed a film at the landmarked playhouse, and Netflix will be bringing in state of the art equipment to screen the movie. The film will be released globally on Netflix on November 27, 2019.

“We’ve lost so many wonderful theaters in New York City in recent years, including single house theaters like the Ziegfeld and the Paris,” said Martin Scorsese.  “The opportunity to recreate that singular experience at the historic Belasco Theatre is incredibly exciting.  Ted Sarandos, Scott Stuber, and their team at Netflix have continued to find creative ways to make this picture a special event for audiences and I’m thankful for their innovation and commitment.”

“It’s an immense honor for The Irishman to be welcomed to the Belasco - an iconic and historic landmark fit for Scorsese's latest cinematic achievement,” said Scott Stuber, head of Netflix Film.

The Belasco Theatre, one of 17 Broadway theatres owned and operated by The Shubert Organization, was designed by architect George Keister and opened in 1907. Screenings of The Irishman mark a return to Broadway for the film’s director and stars. Martin Scorsese directed the 1977 Liza Minnelli Broadway musical The Act.  In 1969, Al Pacino won one of his two Tony Awards for his Broadway debut in Does a Tiger Wear a Necktie? at the Belasco Theatre. Robert De Niro starred on Broadway in Cuba and His Teddy Bear in 1986 and was the director of A Bronx Tale, The Musical, which opened in 2016. Harvey Keitel appeared in Hurlyburly in 1984 and Death of a Salesman in 1975. Bobby Cannavale is a current Broadway regular, having most recently been in The Lifespan of a Fact.

The schedule of screenings at the Belasco Theatre will mirror the traditional Broadway model of 8 performances a week – Tuesday through Sunday evenings, with matinees on Saturdays and Sundays. The theatre will be dark on Mondays.

Robert De Niro, Al Pacino and Joe Pesci star in Martin Scorsese’s THE IRISHMAN, an epic saga of organized crime in post-war America told through the eyes of World War II veteran Frank Sheeran, a hustler and hitman who worked alongside some of the most notorious figures of the 20th century. Spanning decades, the film chronicles one of the greatest unsolved mysteries in American history, the disappearance of legendary union boss Jimmy Hoffa, and offers a monumental journey through the hidden corridors of organized crime: its inner workings, rivalries and connections to mainstream politics.

Netflix is the world's leading internet entertainment service with over 151 million paid memberships in over 190 countries enjoying TV series, documentaries and feature films across a wide variety of genres and languages. Members can watch as much as they want, anytime, anywhere, on any internet-connected screen. Members can play, pause and resume watching, all without commercials or commitments.