GETTIN' THE BAND BACK TOGETHER Announces a Broadway Theatre 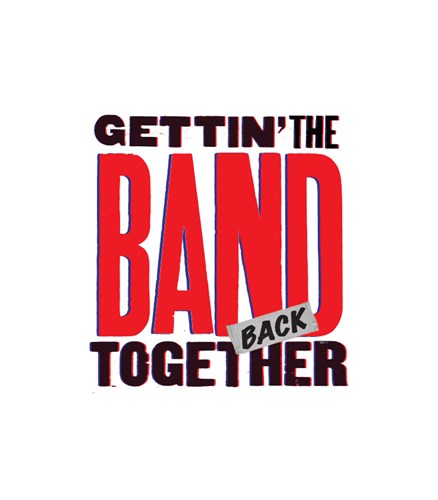 Gettin' The Band Back Together

Tony Award®-winning director John Rando returns to Broadway
with the new musical comedy for anyone
who dreams of a second shot at their first love.

Free cast recording available to the public at:
www.GettinTheBandBackTogether.com

Producers Hunter Arnold, Carl Daikeler, Ken Davenport, Richard Hopper, Roy Putrino and Richard Roth have announced that Gettin’ The Band Back Together will open on Broadway next year at the Belasco Theatre (111 W 44th Street) on August 13, 2018 with previews starting July 18, 2018.

Directed by John Rando (Tony Award Best Director, Urinetown), Gettin’ The Band Back Together has music and lyrics by Mark Allen and a book by Ken Davenport and The Grundleshotz with additional material by Sarah Saltzberg.

The design for the musical includes sets by Derek McLane (Tony Awards for Anything Goes and 33 Variations) and lighting by Ken Billington (Tony Award Chicago).

Casting will be announced in the coming months.

Mitch Papadopolous always dreamed about being the next Bon Jovi, but he chose security over stardom and left those daydreams behind for a day job. For a while he thought he had everything – the high paying job, the high-rise apartment – until his 40th birthday when he got handed a pink slip and had to move back in with his Mom in Sayreville, New Jersey.

And when his high school arch nemesis (with a 20-year-old grudge and a tangerine spray tan) threatens to foreclose on their house, this big-shot banker must save his small-town home the only way he can… by winning The Battle of the Bands.

So he dusts off his guitar, gathers his old gang (the math teacher who isn’t good at math, the Irish cop who dreams about being on Broadway, the dermatologist who can’t get a date, and a 16-year-old Jewish rapper who makes Vanilla Ice look cool), and sets out to win the battle… and maybe even win back the high school sweetheart he left behind… proving it’s never too late to give your dreams one last shot.

The Associate Producers of Gettin’ The Band Back Together are Kayla Greenspan, Valerie Novakoff and Brian Cromwell Smith.

An earlier, developmental staging of Gettin’ The Band Back Together opened at New Jersey’s George Street Playhouse in 2013, this is what the critics had to say:

"Turning 40 has never been so much fun! You're bound to have an awesome time." – NewJerseyStage

"The most fun I’ve had at the theater this year. It rocks" - CentralJersey.com

"A laugh out loud musical for everyone that will definitely leave you feeling good!" – BroadwayWorld

JOHN RANDO (Director) is the Tony and Outer Critic's Circle Award–winning director of Urinetown: The Musical. Mr. Rando's other Broadway credits include A Christmas Story: The Musical, The Wedding Singer, A Thousand Clowns, and Neil Simon's The Dinner Party. With City Center Encores!, he has directed Bernstein's On The Town, Damn Yankees, Face the Music, Of Thee I Sing, The Pajama Game, Do Re Mi, and Strike up the Band. Last winter his production of A Christmas Story: The Musical garnered terrific success in Chicago at the Chicago Theater. His Off-Broadway credits include the 2009 Outer Critic's Circle Award–winner for Best Musical: The Toxic Avenger, as well as productions at the Roundabout Theatre Company, Manhattan Class Company, Manhattan Theatre Club, Primary Stages, the Promenade, the Acting Company, and the Pearl Theatre, among others. Mr. Rando's recent regional credits include his highly acclaimed production of Guys and Dolls at Barrington Stage Company and a revised version of The Toxic Avenger at the Alley theatre. His other extensive regional credits include productions at The Old Globe Theater, Mark Taper Forum, Geffen Playhouse, American Conservatory Theatre, The Williamstown Theatre Festival, The Philadelphia Theatre Company, Berkshire Theatre Festival, Actors Theatre of Louisville, Cleveland Playhouse, Syracuse Stage, and many others. John Rando was a Drama League Directing Fellow and in 2010 was the recipient of the UCLA Department of Theater, Film, and Television Alumni Achievement Award.

KEN DAVENPORT (Book) co-conceived the award-winning Altar Boyz, and also wrote and directed the Off-Broadway hits The Awesome 80s Prom, My First Time and Miss Abigail's Guide to Dating, Mating & Marriage! Davenport also wrote the book for Somewhere in Time, which premiered at Portland Center Stage and created the Award winning web series, The Bunny Hole. On Broadway, Davenport is the producer of Once On This Island and has also produced Deaf West's Spring Awakening, The Play That Goes Wrong, Groundhog Day, The Bridges of Madison County, Macbeth, Kinky Boots (Tony Award), Godspell, Will Ferrell's You're Welcome America (Tony nomination), and others. Ken was featured on a national commercial for Apple's iPhone, named one of Crain's "Forty Under 40" and he also created the Broadway board game Be A Broadway Star. For film he directed and produced These Magnificent Miles: On the Long Road with Red Wanting Blue. His blog, TheProducersPerspective.com, has been featured in Vanity Fair, New York Magazine, The Gothamist and more. He has written articles for Forbes, Mashable, and iMedia and has spoken about the theater and arts marketing at conferences around the world. He is currently the Executive Producer for North America for Andrew Lloyd Webber's Really Useful Group. For more information, visit www.KenDavenport.com.

KEN BILLINGTON (Lighting Designer) is an international lighting designer working in theatre, television, and architecture. Almost 100 Broadway designs include the original production of Sweeney Todd and the current Chicago, which is the longest running American musical in history. Chicago has also been seen in over 20 countries all with the original lighting. Other Broadway productions include Amazing Grace, Act One, Hugh Jackman Back on Broadway, Chaplin, The Scottsboro Boys, White Christmas, [title of show], Lily Tomlin in The Search for Signs…, Footloose, plus revivals of My Fair Lady, Hello Dolly, Sunday in the Park with George (twice), Annie (twice) and Fiddler on the Roof (3 times). His many touring productions both in the USA, Great Britain, and London’s West End include such shows as Fiddler on the Roof, Annie, Disney’s High School Musical and High School Musical 2, The Drowsy Chaperone, What the Butler Saw and White Christmas, among others. Ken is the recipient of many awards including the Tony (Broadway), Luman (architecture), Ace (television) and LDI and USITT Lighting Designer of the Year. In 2015 he was inducted into the Theatre Hall of Fame.