ANASTASIA to Open at the Broadhurst Theatre on Broadway 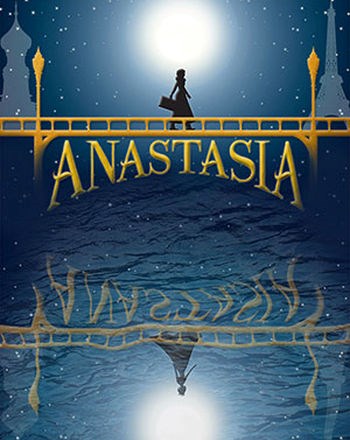 Anastasia The New Musical
To Open April 24, 2017
At the Broadhurst Theatre on Broadway

June 28, 2016 – Producers Stage Entertainment USA, Bill Taylor (Sister Act, Rocky) and Tom Kirdahy Productions (It’s Only A Play, The Visit) announce today the new musical, ANASTASIA, will open on Broadway on April 24, 2017 at the Broadhurst Theatre (235 West 44th Street). The company will be led by Christy Altomare, Derek Klena, John Bolton and Caroline O’Connor in the roles they originated at Hartford Stage. Additional casting will be announced soon.

“After finishing a record breaking run in Hartford, we look forward to bringing the magic of Anastasia to Broadway audiences next spring,” said producers Bill Taylor & Tom Kirdahy. “In Hartford, we saw people ages 8-100 travel from all over the world to enjoy Anastasia’s enduring story. We are thrilled to have Christy, Derek, John and Caroline leading our company again for the Broadway premiere.”

From the twilight of the Russian Empire to the euphoria of Paris in the 1920s, the new musical, ANASTASIA, is the romantic, adventure-filled story of a brave young woman attempting to discover the mystery of her past. The new musical is inspired by the Twentieth Century Fox Motion Pictures.

ANASTASIA features beloved songs from the 1997 film, including Ahrens and Flaherty’s Oscar-nominated “Journey to the Past,” as well as an entirely new score from the Tony Award-winning team.

Terrence McNally (Book). Recipient of the Dramatists Guild of America Lifetime Achievement award, Tony awards for his plays (Master Class and Love! Valour! Compassion!) and his musical librettos (Kiss Of The Spider Woman and Ragtime) and an Emmy Award for Andre’s Mother. An anthology of his plays, Terrence McNally: A Memoir In Plays, was recently published by Grove Press. He has provided the text for two American operas, Deadman Walking and Great Scott, both with Jake Heggie. There was a celebration of his work at the Kennedy Center in 2010 including the world premiere of Golden Age. Anastasia is his third collaboration with Lynn Ahrens and Stephen Flaherty and his first with Darko Tresnjak. He is grateful to Hartford Stage for their enthusiastic and professional support of theatre artists and their new work. Next up: a new play, Fire And Air.

Lynn Ahrens (Lyricist) & Stephen Flaherty (Music). Longtime collaborators Lynn Ahrens and Stephen Flaherty are recipients of the Oscar Hammerstein Award for Lifetime Achievement, and were inducted into the Theater Hall of
Fame in 2015. For Broadway’s Ragtime, they won Tony, Drama Desk and Outer Critics Circle Awards and received two Grammy nominations. They were also nominated for two Academy Awards and two Golden Globes for the score of Twentieth Century Fox’s animated feature Anastasia. They’re thrilled to be bringing Anastasia to the stage with collaborator Terrence McNally. Selected theater credits include Once On This Island; Seussical; Rocky; Little Dancer; Chita Rivera: The Dancer’s Life; Lucky Stiff; the Broadway revival of Ragtime; and Lincoln Center Theater’s Dessa Rose, A Man of No Importance, My Favorite Year and The Glorious Ones. Individually, Ms. Ahrens is an Emmy Award winner, a mainstay writer for Schoolhouse Rock, and wrote book and lyrics for Madison Square Garden’s A Christmas Carol. Mr. Flaherty wrote the score for the new dance musical In Your Arms at the Old Globe, and incidental musical for Neil Simon’s Broadway play Proposals. They are council members of the Dramatists Guild of America, and cofounded the Dramatists Guild Fellows Program for  emerging writers. www.ahrensandglaherty.com

Darko Tresnjak (Director) is a Tony, Obie, Drama Desk, and Outer Critics Circle Award-winning director of plays, operas, and musicals. He has also received five directing awards from the San Diego Theatre Critics Circle, three from the Connecticut Critics Circle, and the Alan Schneider Director Award. His favorite productions include The Ghosts of Versailles with Patti LuPone at Los Angeles Opera; The Merchant of Venice with F. Murray Abraham at Theatre for a New Audience and Royal Shakespeare Company; The Women with Kate Baldwin at The Old Globe; The Skin of Our Teeth with Marian Seldes at Williamstown Theatre Festival; and A Gentleman's Guide To Love and Murder with Jefferson Mays at the Walter Kerr Theatre. This summer, he will direct Macbeth with Placido Domingo at Los Angeles Opera. He is the Artistic Director of Hartford Stage.