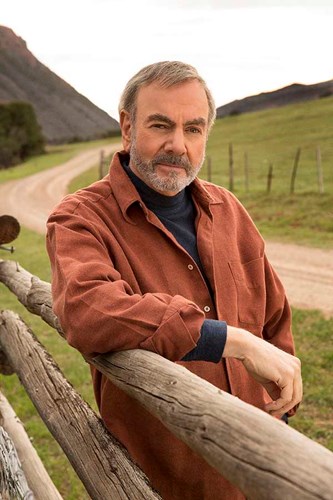 NEW MUSICAL ABOUT THE LIFE & MUSIC

OF THE ICONIC SINGER / SONGWRITER

TO OPEN AT THE BROADHURST THEATRE

The Broadway production of A Beautiful Noise coincides with the 50th anniversary of a series of concerts Diamond gave in October 1972 at Broadway’s venerated Winter Garden Theatre.

Diamond is a native New Yorker. He was born in Brooklyn and famously attended Erasmus High School and later Brighton Beach’s Abraham Lincoln High School. After graduation, he attended NYU on scholarship, dropping out just short of graduation to pursue a career in music. In his legendary career, he has sold out countless venues around the world and across the city including a famous 2015 homecoming when he played the Barclays Center, marking his first concert in Brooklyn in almost five decades.

A Beautiful Noise, the eagerly anticipated new musical, is currently in rehearsals in New York for its upcoming world premiere at Boston’s Emerson Colonial Theatre (106 Boylston Street) where it will play a strictly limited six-week engagement from Tuesday, June 21 through Sunday, July 31.

With his first break into songwriting in the 1960s and his meteoric rise in the 1970s, and plenty of crushing disappointments and heart-stopping triumphs along the way, Neil Diamond has maintained an almost unthinkable level of superstardom for five straight decades. How did a poor Jewish kid from Brooklyn become one of the most universally adored showmen of all time? There’s only one way to tell it: a musical set to his era-defining smash hits that entranced the world.

Throughout his phenomenal and wide-ranging career, Neil Diamond has performed at  sold-out stadiums and arenas around the world, dominated the charts for more than five decades, sold over 130 million albums worldwide and achieved record sales.

A Grammy Award®-winning artist, Diamond is a member of the Rock & Roll Hall of Fame and the Songwriters Hall of Fame. He has been presented with the Johnny Mercer Award, the Grammy Lifetime Achievement Award, and the Sammy Cahn Lifetime Achievement Award, three of the highest honors bestowed on songwriters and artists. He has also been the recipient of the NARAS Music Cares Person of The Year Award and the prestigious Kennedy Center Award for his contributions to American culture.

But above it all, the rockstar is a doting grandfather, loving father, and adoring husband. His music has earned him a multi-generational fanbase and he is a believer of the healing power of music. Through his charitable foundation, he has supported many causes close to his heart.

Casting for the Broadway production of A Beautiful Noise will be announced soon.

Neil Diamond. Throughout an illustrious and wide-ranging musical career, Neil Diamond has sold more than 130 million records worldwide and has charted 39 Top 40 singles and 16 Top 10 albums both in the U.S. and internationally. A Grammy Award-winning artist, Diamond is a member of the Rock and Roll Hall of Fame, the Songwriters Hall of Fame and a recipient of the Sammy Cahn Lifetime Achievement Award, one of the highest honors bestowed upon songwriters. Diamond’s many other achievements include a Golden Globe Award, 13 Grammy nominations and 2009’s NARAS’s MusiCares Person of the Year award. In 2011, Diamond received the prestigious Kennedy Center Honor for his lifetime of contributions to American culture.

Anthony McCarten (Book). A four-time Academy Award nominated and double BAFTA-winning screenwriter and film producer of The Theory Of Everything (2014) Darkest Hour (2017), and The Two Popes (2020), as well as the writer of Bohemian Rhapsody (2018) – winner of four Oscars and the Golden Globe for Best Drama, becoming the most successful straight drama film of all time – New Zealand-born McCarten is also a celebrated novelist and playwright. Beginning his career as a playwright, he received early success with the global hit, Ladies Night. His 2019 play, The Pope, which inspired the Netflix film, premiered in England in 2019 marking his return to writing for the stage for the first time in 20 years. In 2022, his latest play, The Collaboration, about Andy Warhol and Jean Michel Basquiat, premiered to critical acclaim at the Young Vic Theatre in a sold-out run and will open on Broadway in December 2022. He lives in London.

Michael Mayer (Director). Recently credits include the Off-Broadway revival of Little Shop of Horrors and the Broadway revival of Funny Girl. Other Broadway: Burn This; Head Over Heels; Hedwig and the Angry Inch; Spring Awakening; American Idiot (also co-author); Thoroughly Modern Millie; Side Man; A View from the Bridge; Michael Moore’s The Terms of My Surrender; Everyday Rapture; You're a Good Man, Charlie Brown; and Triumph of Love. National tours: Angels in America, Millie, Spring Awakening, American Idiot, Hedwig, Charlie Brown. London: a record-breaking West End run of Funny Girl and UK tour. Tokyo: As You Like It. Film: Single All the Way (Netflix, GLAAD Award), The Seagull, A Home at the End of the World, and Flicka Television: “Smash” (director and producer, season one) and two seasons of “Alpha House” for Amazon. Metropolitan Opera: Rigoletto, La Traviata, and Nico Muhly’s Marnie.

Ken Davenport (Producer) is a two-time Tony Award-winning Broadway producer whose credits include Once On This Island (Tony Award), The Play that Goes Wrong, Groundhog Day (Tony nomination), Deaf West Theatre’s Spring Awakening (Tony nomination), It’s Only a Play starring Nathan Lane and Matthew Broderick, Macbeth starring Alan Cumming, Godspell, Kinky Boots (Tony Award), The Visit (Tony nomination) as well the Off-Broadway productions of Altar Boyz, The Awesome 80s Prom and many more. Davenport’s productions have been produced internationally in over 25 countries around the world. He was the Executive Producer for North America for Andrew Lloyd Webber’s Really Useful Group and is the Theatrical Consultant for Primary Wave Music Publishing. His blog has been featured in every major publication around the world, from the New York Times to Vanity Fair. He conceived the best-selling board game Be A Broadway Star (available on Amazon) and he is an avid golfer. Ken is a Massachusetts native, raised in Sturbridge, MA, who grew up going to shows at the Colonial Theatre. He dedicates his career to his late father, Dr. Kenny Dipchand Hasija, an Indian immigrant who always dreamed about going into the theater but encouraged his son to do so instead. Upcoming productions include Harmony by Barry Manilow and Bruce Sussman, The Griswolds’ Broadway Vacation and Joy. www.kendavenport.com

Bob Gaudio (Producer) wrote his first hit, “Who Wears Short Shorts,” at 15, for the Royal Teens, and then went on to become a founding member of the Four Seasons and the band’s principal songwriter. He also produced the hit “You Don’t Bring Me Flowers” for Neil Diamond and Barbra Streisand (Grammy nomination, Record of the Year) as well as six albums for Diamond, including The Jazz Singer. Other producing credits include albums for Frank Sinatra, Marvin Gaye, Diana Ross, Michael Jackson, and the soundtrack for the film of Little Shop of Horrors. Several songs co-written with Bob Crewe have been cover hits for such artists as the Tremeloes (“Silence Is Golden”), the Walker Brothers (“The Sun Ain’t Gonna Shine Anymore”), and Lauryn Hill (“Can’t Take My Eyes Off You”). With his wife, Judy Parker, Gaudio produced and co-wrote the Who Loves You album for the Four Seasons and one of Billboard’s longest-charted singles (54 weeks), “Oh, What a Night.” A high point in his career came in 1990 when, as a member of the original Four Seasons, Gaudio was inducted into the Rock and Roll Hall of Fame. In 1995, he was inducted into the Songwriters Hall of Fame, which hailed him as “a quintessential music-maker.” To this day, Bob Gaudio and Frankie Valli still maintain their partnership... on a handshake.