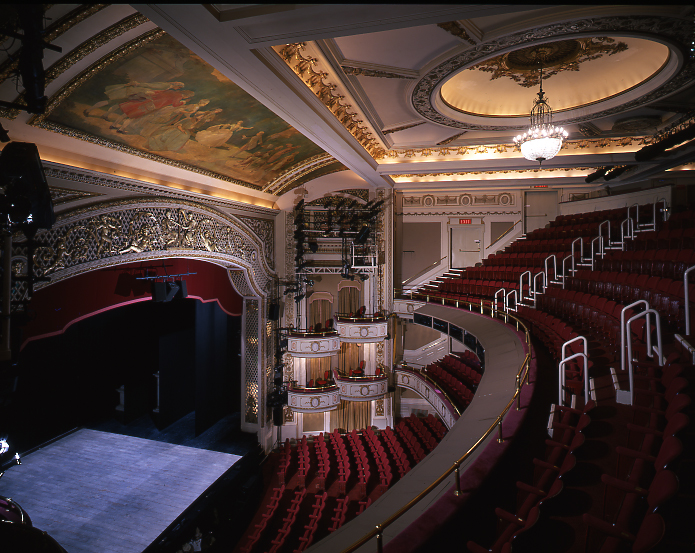 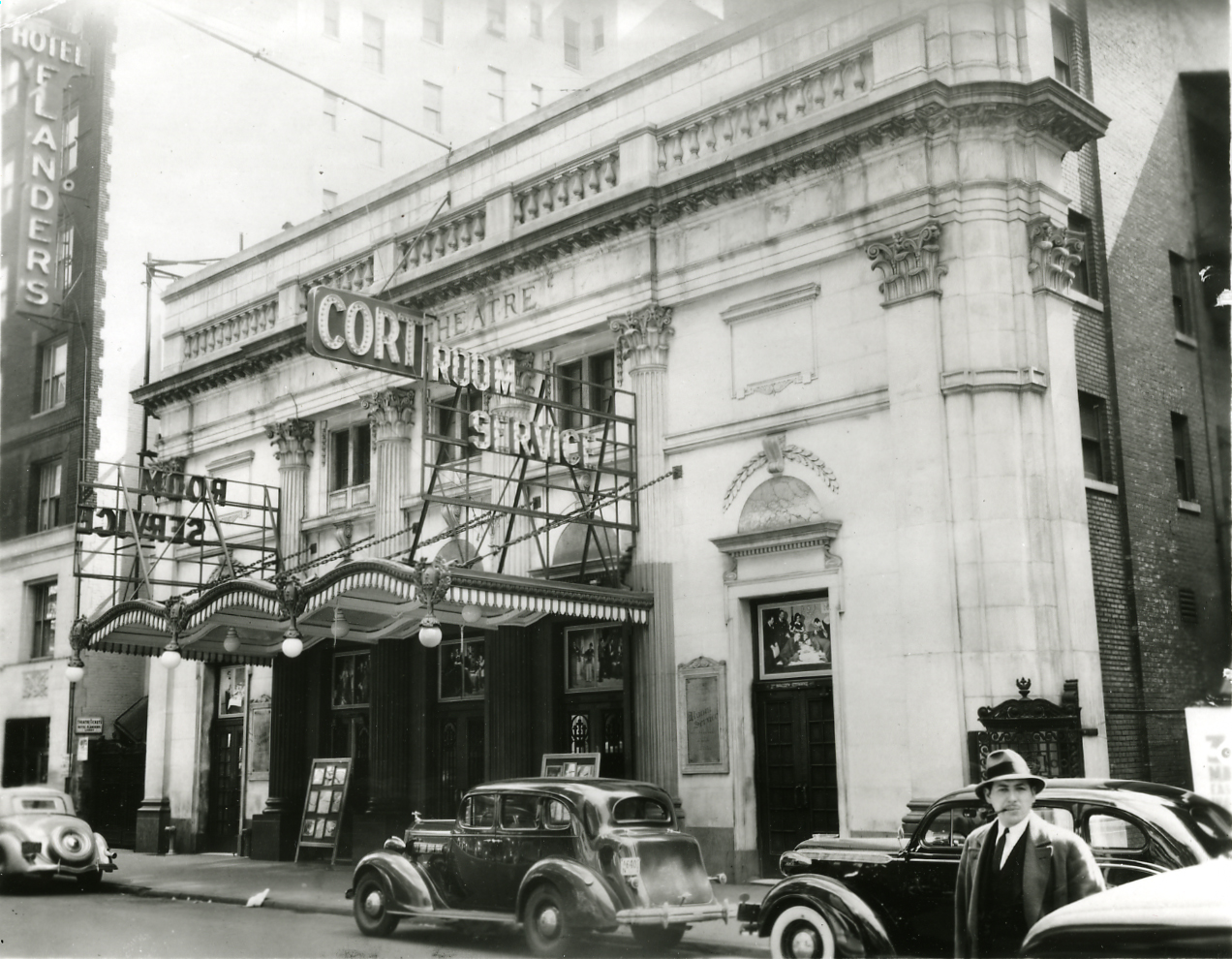 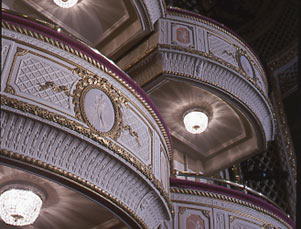 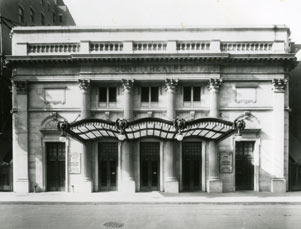 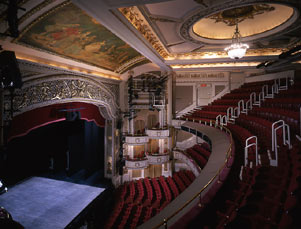 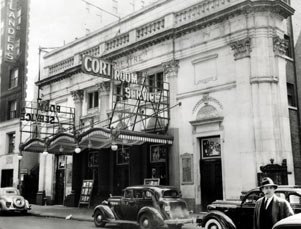 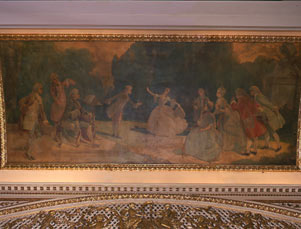 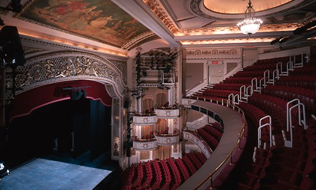 The Cort Theatre was built by and named for John Cort, general manager of the Northwestern Theatrical Association, a theatre circuit centered in Seattle with playhouses scattered throughout the western US and British Columbia. A fugitive from a vaudeville comedy team called Cort and Murphy, Cort moved from performing to management in the 1890s. The Shuberts acquired the theatre in 1927, two years before Cort’s death.

The Cort is the only surviving, still active, legitimate theatre on Broadway designed by Thomas Lamb. Its classic exterior was inspired by the 18th century French Petit Trianon at Versailles. Architecture from the period of Louis XVI also inspired the interior. The lobby is constructed of Pavanozza marble with panels of Marie Antoinette plasterwork. The proscenium arch was constructed in perforated plaster treated with art glass that could be lit during performances; this arch still exists but is not operational today.

Details on the Cort Theatre's Accessibility

Access Information
Theatre is not completely wheelchair accessible. There are no steps into the theatre.

Shubert Audience Services
The Cort Theatre provides accommodations for patrons who are blind, deaf, partially sighted, and/or have hearing loss. The theatre provides infrared assistive listening devices for every performance at the theatre. In addition, beginning four weeks after a show’s official opening night performance, hand-held audio description devices, hand-held captioning devices, and unlimited access to downloadable audio description and/or captioning for personal mobile devices are all available free of charge. Prior thereto, we offer live-caption via CART upon request with two-weeks’ advance notice. For assistance, or If you have questions, contact Shubert Audience Services at 212-944-3700 or audienceservices@shubertorg.com. There is also a representative at the Shubert Audience Services kiosk at every performance to assist any patron with any of our devices, software, or technology. Hand-held devices are limited, although additional devices can be obtained with at least twenty-four hours’ notice.

Accessibility by Seating Section
Orchestra Location: Seating is accessible to all parts of the Orchestra without steps.

Mezzanine Location: Up 2 flights of stairs. Please note: On the Mezzanine level there are approximately 2 steps down per row. Entrance to Mezzanine is behind Row H.

Balcony Location: Up 3 flights of stairs. Please note: On the Balcony level there are approximately 2 steps down per row. Entrance to Balcony is behind Row F.

Restroom
Not wheelchair accessible. Restrooms located down 1 flight of 19 steps.

If you need wheelchair accessible restrooms you can use the ones in the Renaissance Hotel mezzanine level (7th Avenue and 48th Street).

Water Fountain
Accessible fountain located in the lobby of the Cort.

The venue's initial production was Peg o’ My Heart (1912), starring Laurette Taylor and directed by Oliver Morosco. John Cort’s first production at the theatre was The Princess Pat (1915), an operetta, and the first of only 12 musicals to play here (4 were produced by Cort himself). The longest running musical at this theatre was The Magic Show (1974), which ran 1,920 performances. Three recent musical productions include Sarafina (1988), Kat and the Kings (1999), and A Year with Frog and Toad (2002).

Early non-musical hits at the Cort gave it the reputation of being a “lucky” house. They include Roi Cooper Megrue’s first big hit, Under Cover (1914), John Drinkwater’s Abraham Lincoln (1919) starring Frank McGlynn, and George S. Kaufman and Marc Connelly’s Merton of the Movies (1922) with Glenn Hunter. The Cort also featured performers such as Ethel Barrymore and Henry Daniell in The Second Mrs. Tanquerray (1924), Judith Anderson in Behold the Bridegroom (1927), and Katharine Hepburn in These Days (1928)--The actress had only a few lines, and the play closed after 8 performances.

During the 1930s and 1940s, the Cort welcomed shows such as classic works. Lillian Gish, Osgood Perkins and Walter Connelly in Uncle Vanya (1930), Ruth Gordon in The Three-Cornered Moon (1933), and Lawrence Olivier in The Green Bay Tree (1933). The Theatre Guild presented The Winter’s Tale (1946) and Wesley Addy, Sir Cedric Hardwicke and Marlon Brando were featured in Antigone and Candida, produced in repertory in 1946. Eva Le Gallienne translated and starred in Ibsen’s Ghosts and Hedda Gabler (1948), and Grace Kelly made her Broadway debut in Strindberg’s The Father (1949).

Among the notable stars and productions of the 1950s and 1960s were Katharine Hepburn and William Prince in As You Like It (1950); Saint Joan (1951) with Uta Hagen; the Pulitzer Prize-winning The Shrike (1952) featuring José Ferrer; Darren McGavin and Geraldine Page in The Rainmaker (1954); The Diary of Anne Frank (1955); Purlie Victorious (1961) with Ossie Davis and Ruby Dee; and Sunday in New York (1961) with Robert Redford. One Flew Over The Cuckoo’s Nest had a short run of only 82 performances at the Cort in 1963, but bolstered the careers of Kirk Douglas and Gene Wilder. Jane Fonda made her Broadway debut in There Was A Little Girl (1960), and Al Pacino starred in Richard III (1969).

The Cort also hosted the Julie Taymor-directed The Green Bird (2000) and the Carol Burnett-penned Hollywood Arms (2002). It has also been home to a revival of On Golden Pond (2005) with James Earl Jones, Douglas Carter Beane’s comedy The Little Dog Laughed (2006), August Wilson’s final play Radio Golf (2007), Will Ferrell's You're Welcome America (2009), and the revivals of A View from the Bridge (2010) with Liev Schreiber and Scarlett Johansson, and the Tony Award winning Fences (2010) with Denzel Washington and Viola Davis. Most recent residents include Time Stands Still (2010) with Laura Linney, Born Yesterday (2011) with Nina Arianda, the Tony nominated revival of This is our Youth (2014), Larry David's A Fish in the Dark (2015), the Tony nominated musical by Steve Martin and Edie Brickell, Bright Star (2016) and the Tony winning play, Indecent (2017).