Ushering goes back generations: They're part of the Broadway family 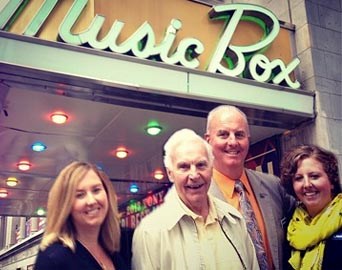 Ushering goes back generations: They're part of the Broadway family
By Linda Winer

Eighty-three years ago, Dennis Scanlon's grandfather got a job ushering at the Music Box Theatre. Not long after, Scanlon's father put on the uniform -- yes, they used to wear outfits with burgundy bow ties -- at the same intimate 45th Street playhouse, built in 1920 to house Irving Berlin's "Music Box Revue."

Scanlon, who commutes to work from Floral Park, has been patrolling the aisles of this unusual family business for 47 years. He is now chief usher and, some days, he brings his two grown daughters in from Long Island to work as substitutes.

Debbie Cappadona, chief usher at the Longacre Theatre, just got her 35th year pin. Sherry McIntyre, chief at the Barrymore, started 38 years ago, including 18 years overseeing "Cats" at the Winter Garden. "I watched scenes over and over and over. I just loved them," she says, adding a shrug of playful defensiveness, "I was young."

Then there is John Barbaretti, ticket-taker at the Barrymore and, with 20 years experience, the relative newbie in the group. Since his mother ushered at the Imperial for 50 years, sometimes bringing actors home for spaghetti and not retiring until 89, it is safe to say this special world is in his blood.