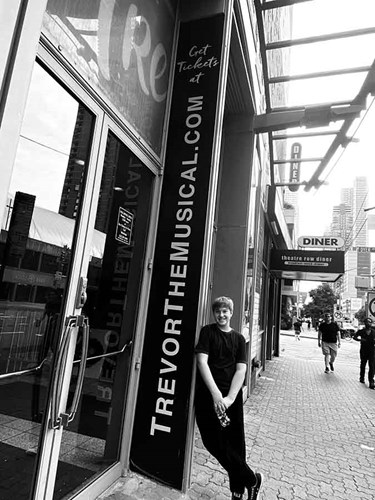 Producers Roy Furman, John Ambrosino / Josie Bray / Mark Woods are delighted to announce that 13-year-old Holden William Hagelberger from Sugarland, Texas has been cast in the role of “Trevor” in Trevor: The Musical, following a process which included a national virtual casting call with over 1300 submissions.

Holden, who arrived in New York this week, will lead the 18-member company of Trevor when performances begin Monday, October 25, 2021 at Stage 42 (442 West 42nd Street, near 9th Avenue). Opening night is Wednesday, November 10.

Holden’s first lead and favorite role at school was “Charlie Bucket” in Willy Wonka. The first Broadway musical he saw was SpongeBob SquarePants, and this time around, he can’t wait to see Hadestown during his time off from performing in Trevor.

Holden exclaimed, “Being cast in Trevor: The Musical has been a dream come true! I am so excited to make my NYC theatrical debut at Stage 42. I am looking forward to so many things, like meeting the cast, performing on a New York City stage for the first time and enjoying the lights and energy of Times Square!”

Trevor casting director Merri Sugarman said, “Between the virtual open call, agent and manager submissions, extensive outreach, and Casting's vast files that have been expanding since the very first Trevor: The Musical workshop 6 years ago, we probably saw close to 2000 kids for the show, and hundreds strictly for the title role. We knew we were looking for a purple unicorn. That somehow this beautiful, extraordinarily talented boy found his way to us against all odds is beyond thrilling.”

Trevor’s producers added, "Playing Trevor is an enormous undertaking for any performer. Holden embodies all of the many facets of our show's leading character, along with the dedication and determination to shine. We are thrilled to know we have found our Trevor and can't wait for the theater world to meet him."

Trevor: The Musical is about a charming 13-year-old force of nature with a vivid imagination. As he deals with becoming a teenager, Trevor struggles to navigate his own identity and determine how he fits in a challenging world.

Trevor: The Musical features a book and lyrics by Dan Collins (Southern Comfort) and music by Julianne Wick Davis (Southern Comfort). Direction is by Marc Bruni (Beautiful: The Carole King Musical) and choreography is by Josh Prince (Beautiful: The Carole King Musical). Trevor is based on an original story by Celeste Lecesne and the Academy Award-winning short film, Trevor, directed by Peggy Rajski and produced by Randy Stone and Peggy Rajski, that had an original screenplay by Celeste Lecesne.

The Trevor Project, founded by Peggy Rajski, Randy Stone and Celeste Lecesne, was also created as a result of the Trevor film and is not affiliated with the musical. It is the nation’s only accredited crisis intervention and suicide prevention organization focused on saving LGBTQ lives. www.TheTrevorProject.org

Winner of the Jeff Award for Best New Work, the Pre-New York Engagement of Trevor was presented by Writers Theatre in a special agreement with John Ambrosino / Josie Bray / Mark Woods through the Literary Development Initiative, with the generous support of David and Mary Winton Green, Glencoe, IL; Kathryn M. Lipuma, Executive Director.