TAKE ME OUT To Return to Broadway This Fall 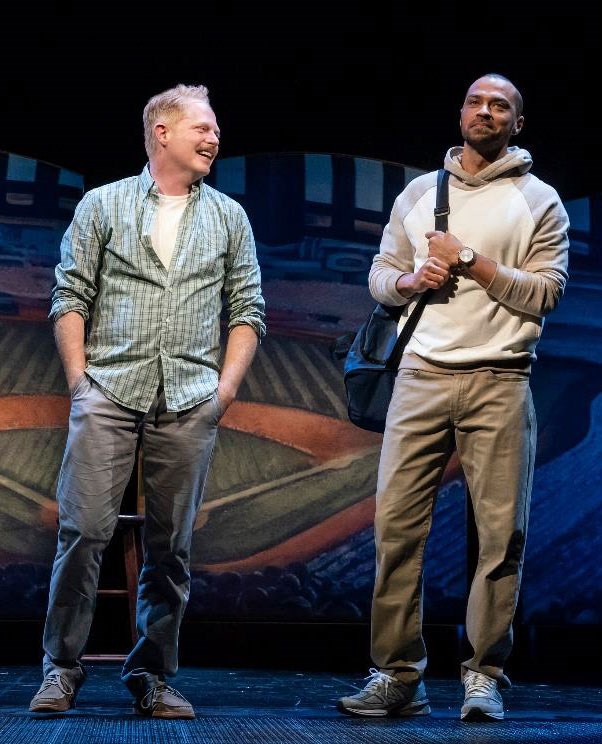 Thursday, August 18 – Lead producers Barry and Fran Weissler announced that the Tony Award-winning revival of TAKE ME OUT, a Second Stage Theater Production (Carole Rothman, Artistic Director; Khady Kamara, Executive Director), will return to Broadway on Thursday, October 27 at the Schoenfeld Theatre. Written by Richard Greenberg and directed by Scott Ellis, TAKE ME OUT opened in spring 2022 to rave reviews and went on to garner four Tony Award nominations, winning Best Revival of a Play and Best Featured Actor in a Play for Jesse Tyler Ferguson.

“Second Stage’s Tony Award-winning production was one of the most buzzed about plays of the spring season, and its limited run was too brief to capture the interest and demand for tickets,” said producer Barry Weissler. “Fran and I are so honored to serve as pinch-hitters and take the show into extra innings. We were blown away when we saw it at the Hayes earlier this year under Scott Ellis’ brilliant direction. After being big fans when the play premiered back in 2004, we were struck by how relevant and timely it continues to be. Richard Greenberg brilliantly uses the lens of America’s favorite pastime to expose and explore the prejudices that divide us, but he strikes the perfect balance, managing to entertain as well as enlighten. In short, to borrow a line from the show, Fran and I ‘have come to understand that baseball is a perfect metaphor for hope in a democratic society!’”

TAKE ME OUT will return with Tony Award Nominee Jesse Williams and Tony Award Winner Jesse Tyler Ferguson. The remainder of the cast will be announced at a later date.

Tony Award ® winner Jesse Tyler Ferguson and Tony nominee Jesse Williams reprise their roles in this Tony- winning Best Play Revival, returning to Broadway for 14 weeks only! In Take Me Out, playwright Richard Greenberg celebrates the personal and professional intricacies of America’s favorite pastime. When Darren Lemming, the star center fielder for the Empires, comes out of the closet, the reception off the field reveals a barrage of long-held unspoken prejudices dealing with sexuality and masculinity, money and power, and race and class. Facing some hostile teammates and fraught friendships, Darren is forced to contend with the challenges of being a gay person of color within the confines of a classic American institution. As the Empires struggle to rally toward a championship season, the players and their fans begin to question tradition, their loyalties, and the price of victory.

Critic’s Pick! “Take Me Out is funny, quite serious, and cerebral without undermining its emotion. A DELIGHTFUL AND PROVOCATIVE REVIVAL.” -
Jesse Green, The New York Times

“Buffed to a scintillating sheen by director SCOTT ELLIS. RICHARD GREENBERG’S wit steps up winningly to the plate.” - Peter Marks, The Washington Post

Presale tickets for Take Me Out will be available exclusively to Audience Rewards® members and American Express® Card Members from Wednesday, August 24 at 10am through Friday, August 26 at 9:59am at www.AudienceRewards.com.

Audience Rewards is the Official Rewards Program of Broadway, providing membership benefits and rewards for more than 2.7 million members and representing more than a quarter of all Broadway tickets purchased through Ticketmaster and Telecharge. Free and easy to join, Audience Rewards allows buyers to earn Show Points on every ticket purchase, to be redeemed for free tickets, theater collectibles, unique experiences, and more. Founded in 2008 by a unique coalition of prominent theater owners, including Nederlander, Shubert, and Jujamcyn, major national presenters, and key performing arts centers from across the country, Audience Rewards has offered members first access presales to more than 100 Broadway shows and 200 VIP experiences and events, which have included a walk-on role in Rock of Ages, a cooking class with Gavin Creel & Celia Keenan- Bolger, celebrity Q&As, backstage tours and much more.

Tickets will go on sale to the general public on Friday, August 26 at 10AM.

Please note: TAKE ME OUT contains adult situations and nudity.

Out of respect and support for our actors and in order to create a phone-free space, Take Me Out is partnering with Yondr for all performances. This allows both the actors and the audience to fully immerse themselves in the show, eliminating digital distractions.

Upon arrival at the Schoenfeld, all phones are placed in Yondr pouches by our staff and will be opened at the end of the performance. Guests maintain possession of their phones at all times, and can access them at intermission as needed. For more information, please visit https://www.overyondr.com/faq

Masks are recommended, but not required.