David Cromer Completes the Cast of THE WAVERLY GALLERY 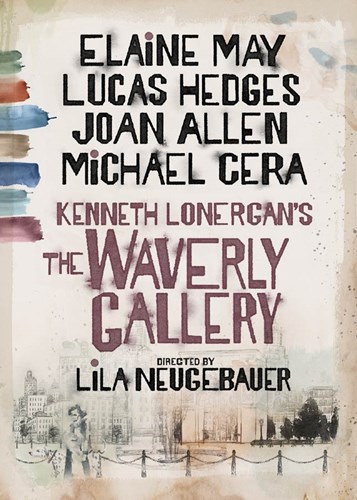 COMPLETES THE CAST OF

Producer Scott Rudin is pleased to announce that actor and award-winning director David Cromer completes the cast for the Broadway premiere of Academy Award winner Kenneth Lonergan’s The Waverly Gallery. Cromer, who won a 2018 Tony Award for Best Director of a Musical for The Band’s Visit, will play the role of ‘Howard Fine.’

Directed by Drama Desk and Obie Award winner Lila Neugebauer in her Broadway debut, The Waverly Gallery, a 2001 finalist for the Pulitzer Prize for Drama, begins performances Tuesday, September 25, prior to opening on Thursday, October 25, 2018 at Broadway’s Golden Theatre (252 West 45th Street).

A powerfully poignant and often hilarious play, The Waverly Gallery is about the final years of a generous, chatty, and feisty grandmother’s battle against Alzheimer’s disease. Gladys is an old-school lefty and social activist and longtime owner of a small art gallery in Greenwich Village. The play explores her fight to retain her independence and the subsequent effect of her decline on her family, especially her grandson. More than a memory play, The Waverly Gallery captures the humor and strength of a family in the face of crisis.

The Waverly Gallery originally premiered at the Williamstown Theatre Festival in August 1999, before opening Off-Broadway at the Promenade Theatre in March 2000.

ELAINE MAY(Gladys Green) was a founding member of the improvisational theatre groups the Compass Players and The Second City. She first came to national prominence with Nichols and May, her improvisational comedy duo with Mike Nichols, which became an immediate and overnight sensation, and stands as one of the most iconic comedy teams in history. Their hit recordings include the Grammy Award-winning chart-topping classic, An Evening with Nichols and May, Improvisations to Music, Mike Nichols and Elaine May Examine Doctors, and In Retrospect; and their work has influenced many of the greatest comedians of our time, including Steve Martin, Lily Tomlin, Robin Williams, Billy Crystal, and the “Saturday Night Live” Not Ready for Prime Time Players. By perfecting the art of improvisation and introducing it to the public through their appearances in clubs and on television and radio, Nichols and May forever changed the face of comedy, and our collective sense of humor. Ms. May’s select writing credits include the films The Birdcage starring Robin Williams and Nathan Lane (reuniting her with Mike Nichols), Heaven Can Wait, Wolf, Reds, Primary Colors, A New Leaf, and Ishtar (she also directed the latter two films). Ms. May also directed the hit 1972 film, The Heartbreak Kid. The Waverly Gallery marks Elaine May’s first appearance on Broadway since her 1960 debut in An Evening with Mike Nichols and Elaine May.

JOAN ALLEN (Ellen Fine) received a Tony Award for Best Actress in a Play for Lanford Wilson’s Burn This͟, and was Tony-nominated for The Heidi Chronicles. Her most recent Broadway appearance was in Impressionism. Off-Broadway: Delores, The Marriage of Bette and Boo, and Steppenwolf’s And a Nightingale Sang..., for which she received Clarence Derwent, Drama Desk, Outer Critics Circle, and Theatre World Awards. An original member of Chicago’s famed Steppenwolf Theatre Company, Allen performed in many of the company’s productions, including The Wheel, Earthly Possessions, Reckless, A Lesson from Aloes, Balm in Gilead, and Of Mice and Men. Film: Room, Oliver Stone’s Nixon (Academy Award and Screen Actors Guild nominations), The Crucible (Academy Award and Golden Globe Award nominations), The Contender (Academy Award, Golden Globe, Screen Actors Guild and Independent Spirit Award nominations), The Ice Storm, Yes, The Bourne Ultimatum, A Good Marriage, The Bourne Supremacy, The Notebook, Compromising Positions,Peggy Sue Got Married, Manhunter, Tucker: The Man and His Dream, Ethan Frome, and The Upside of Anger. Television: “The Family” (ABC), “The Killing” (Netflix), “Luck” (HBO), the title character and executive producer for “Georgia O’Keefe” (Lifetime), for which she earned nominations for the Emmy Award, SAG Award and Golden Globe Award as both Outstanding Actress in a Miniseries or Movie and Outstanding Made for Television Movie, and “The Mists of Avalon” (TNT), for which she was Emmy Award nominated for Outstanding Supporting Actress in a Miniseries or Movie.

MICHAEL CERA (Don Bowman) made his Broadway debut in Kenneth Lonergan’s award-winning play This Is Our Youth, following a sold-out and critically acclaimed run at Chicago’s Steppenwolf Theatre, and was recently seen on Broadway in Kenneth Lonergan’s Lobby Hero, for which he received a 2018 Tony Award nomination for Best Featured Actor in a Play. Cera’s television work includes the role of George-Michael Bluth in the Emmy Award-winning Fox series “Arrested Development.” His film credits include the blockbusters Superbad and Juno, as well as Nick & Norah’s Infinite Playlist, Youth in Revolt, Scott Pilgrim vs. the World, and This is the End. Most recently, Cera was heard in the animated features Sausage Party and The LEGO Batman Movie.

DAVID CROMER (Howard Fine) is a New York-based director and actor. He appeared on Broadway as Karl Lindner in the 2014 revival of A Raisin in the Sun, and Off-Broadway as the Stage Manager in Our Town, which he also directed, at the Barrow Street Theatre. He appeared in the HBO series “The Newsroom,” the Showtime series “Billions,” and in the motion picture The Meyerowitz Stories (New and Selected). As a director, his New York credits include The Band’s Visit (2018 Tony Award for Best Direction of a Musical, Ethel Barrymore Theatre); the Broadway revivals of Brighton Beach Memoirs and The House of Blue Leaves; The Treasurer (Playwrights Horizons); Man from Nebraska (Second Stage Theatre); The Effect, Orson’s Shadow, and Tribes (Barrow Street Theatre); Women or Nothing (Atlantic Theater Company); Really Really (MCC Theater); When the Rain Stops Falling and Nikolai and the Others (Lincoln Center Theater); and Adding Machine (Minetta Lane Theatre). Other directing credits include Come Back, Little Sheba (Huntington Theatre Company); The Sound Inside (Williamstown Theatre Festival); and Our Town in London, Chicago, Los Angeles, Boston and Kansas City. Cromer has received a Tony Award, Drama Desk Award, three Obie Awards, three Lucille Lortel Awards, a Joe A. Callaway Award, four Jeff Awards, and in 2010 was made a MacArthur Foundation Fellow.

ANN ROTH (Costume Design) is a Tony Award and Academy Award-winning costume designer with over 100 theater design credits. Select designs include the original Broadway productions of The Odd Couple,Purlie, Seesaw, The BestLittle Whorehouse in Texas, They’re Playing Our Song, Hurlyburly, The House of Blue Leaves, The Book of Mormon, and The Nance (Tony Award). Additional theatre credits include A Raisin in the Sun, This Is Our Youth, A Delicate Balance, Blackbird, Shuffle Along…, The Front Page, Carousel, Three Tall Women, and The Iceman Cometh. Film credits include The English Patient (Academy Award), The Post,Julie & Julia, The Reader, Doubt, Mamma Mia!, Cold Mountain, The Hours, The Talented Mr. Ripley, The Birdcage, Klute, Working Girl, Silkwood, 9 to 5, Hair, and Midnight Cowboy. Roth was inducted into theTheater Hall of Fame in 2011.

BRIAN MacDEVITT( Lighting Design). His Broadway credits include Carousel, The Front Page, Blackbird, Fish in the Dark, A Raisin in the Sun, Betrayal, The Enchanted Island (Metropolitan Opera), Death of a Salesman, The Book of Mormon (Tony Award), Fences, and A Behanding in Spokane. He also received Tony Awards for Into the Woods, ThePillowman, The Coast of Utopia, and Joe Turner’s Come and Gone. Dance credits include designs for Merce Cunningham’s Nearly Ninety, the Joffrey Ballet, American Ballet Theatre, Tere O’Connor Dance, Lar Lubovitch Dance Company, and Nancy Bannon. MacDevitt is a member of Naked Angels and is a faculty member at the University of Maryland.