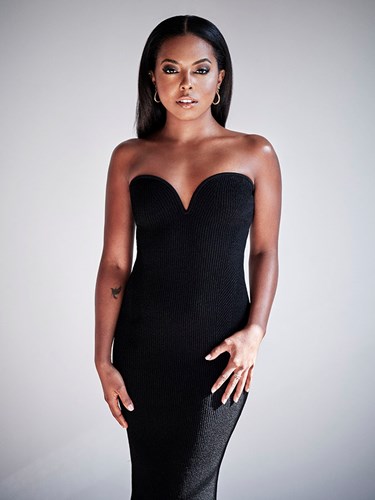 Written and adapted for the stage

(New York, NY - January 23, 2023) – Tony Award winner Adrienne Warren (Tina – The Tina Turner Musical) will star in the American premiere of ROOM, written and adapted for the stage by Emma Donoghue, based on her 2010 best-selling novel which she also adapted into the award-winning 2015 film. The production, featuring songs and music by Scottish songwriters Kathryn Joseph and Cora Bissett and directed by Ms. Bissett, will open Monday, April 17, 2023 on Broadway at the Shubert Organization’s brilliantly restored James Earl Jones Theatre (138 West 48th Street), with previews beginning on April 3, 2023. The limited engagement will run through September 17, 2023. Additional casting will be announced in coming weeks.

“I am truly honored for the opportunity to return to Broadway in a project unlike anything I’ve done before,” Adrienne Warren commented. “There were many reasons I wanted to join this team in telling this story, but most importantly, I wanted to share this beautifully human bond between a mother and her son. This is for all the little Jack’s out there determined to hold on to their sense of joy and wonder and all the Ma’s out there doing their absolute best to live, love, and protect through it all.”

ROOM comes to Broadway following its critically acclaimed 2017 world premiere at Theatre Royal Stratford East, London, UK, and productions at the Abbey Theatre in Dublin, Ireland; the National Theatre of Scotland; the Grand Theatre in London, Ontario; and the Princess of Wales Theatre in Toronto, Ontario.

Kidnapped as a teenage girl, Ma (Adrienne Warren) has been locked for seven years inside a purpose-built room in her captor’s garden. Her five-year-old son, Jack, has no concept of the world outside and happily exists inside Room with the help of Ma’s games and his vivid imagination where objects like Rug, Lamp and TV are his only friends. But for Ma the time has come to escape and face their biggest challenge to date: the world outside Room.

Irish Canadian author and playwright Emma Donoghue’s 2010 novel ROOM sold close to three million copies and was shortlisted for the UK’s prestigious Booker Prize and Orange Prize for Fiction. Donoghue also wrote the screenplay for the critically acclaimed 2015 film adaptation, for which she received Academy Award, Golden Globe, and BAFTA nominations for Adapted Screenplay, and for which she won the Evening Standard Award for Best Screenplay.

Donoghue was approached by Scottish director, playwright, and musician Cora Bissett to adapt ROOM for the stage. Donoghue was excited to explore the inherent theatricality in the story of a mother and son who share stories, songs, hope and joy to cope with their desperate situation. Bissett directs and co-wrote the show’s songs with fellow Scottish singer/songwriter Kathryn Joseph.

Star Adrienne Warren earned ecstatic reviews in London and on Broadway for her electrifying performance as Tina Turner in Tina: The Tina Turner Musical. The Washington Post raved about her, “Warren has that extra something — the rare gene on the E! chromosome, for entertainer, maybe? — that separates a workmanlike portrayal from a great one.” For her performance in Tina, she won the Tony Award, Drama Desk, Antonyo Award and Outer Critics Circle Award. She was also nominated for the Olivier and Evening Standard Awards. Her Broadway appearances also include Shuffle Along (Tony nomination) and Bring It On: The Musical, and the national tour of Dreamgirls. Her recent credits include the film, The Woman King, and the ABC limited series, “Women of the Movement.”

The production features set and costume design by Lily Arnold and projection design by Andrzej Goulding.

Adrienne Warren’s (Ma) talent as a singer, actress, and dancer has established her as a dynamic triple threat. Warren is perhaps most well known for her Tony Award- winning performance as Tina Turner in Broadway’s Tina: The Tina Turner Musical. Warren originated the role in numerous workshops of the show, working together with Tina Turner herself to embody the titular role. Warren transferred the role to Broadway following the 2018 West End production, for which she earned 2019 Olivier, Evening Standard and Joe Allen Award nominations. Warren’s performance in the Broadway run has been heralded as “extraordinary” (The Hollywood Reporter), “electrifying” (Rolling Stone) and “star-making” (The New York Times). In addition to the Tony Award, she also received a Chita Rivera nomination and the Drama Desk, Antonyo, and Outer Critics Circle Awards for her iconic performance. Warren can currently be seen in TriStar Pictures’ The Woman King. The film is directed by Gina Prince-Bythewood and also stars Viola Davis, Thuso Mbedu, Lashana Lynch, and John Boyega. It is a historical epic inspired by true events that took place in the Kingdom of Dahomey, one of the most powerful states in Africa in the 18th and 19th centuries.

Most recently, Warren starred as Mamie Till-Mobley in the six-episode limited series for ABC entitled “Women of the Movement.” The series, created/written by Marissa Jo Cerar and produced by Jay-Z, Will Smith, and Aaron Kaplan, premiered on January 6, 2022. The series centers on Mamie Till-Mobley, who devoted her life to seeking justice for her son Emmett Till. It was also recently announced that Warren signed a one-year development deal with Aaron Kaplan’s Kapital Entertainment, which produced “Women of the Movement.” Under the pact, Warren will collaborate exclusively with Kapital on the development of ongoing and limited series. Warren previously earned a Tony nomination for her performance as Gertrude Saunders/Florence Mills in the Broadway production of Shuffle Along opposite Audra McDonald. In addition to her Tony nomination, she was also nominated for a Chita Rivera Award (formerly Fred & Adele Astaire Award). Warren made her Broadway debut in 2012 in Bring It On: The Musical. She previously appeared onstage in The Wiz (Encores! City Center) and Dreamgirls (NAACP Theatre Award nomination, The Apollo). She made her Carnegie Hall debut in 2017 with the New York Pops and continues to perform around the world. Her television and film credits include “Paws & Fury: The Legend of Hank,” “Helpsters,” “Quantico,” “Black Box,” “Blue Bloods” and “Orange is the New Black.” Upcoming, she can be seen in the highly anticipated Netflix feature film, Rustin. Warren is also a co-founder of the Broadway Advocacy Coalition (BAC), which unites artists, experts, students, and community leaders to use storytelling and artistry to combat systemic racism.

BAC received a special Tony Award in 2021. She is a graduate of Marymount Manhattan College and the Governor’s School for the Arts in Norfolk, Virginia. Warren’s voice can also be heard as the iconic spokesperson for Maybelline Cosmetics. Upcoming, she will star as Benny in Hulu’s highly anticipated series, “Black Cake,” based on the best-selling book by Charmaine Wilkerson. This marks a reunion for Warren with Cerar, Kapital Entertainment, and Disney following their collaboration on “Women of the Movement.”

Emma Donoghue (Playwright). Born in Dublin in 1969, Emma Donoghue is an award-winning playwright, screenwriter and novelist who has made her home in London Ontario since 1998. Her international bestseller Room won the Rogers Writers Trust and Commonwealth Prizes and was a finalist for the Man Booker and Orange; the screenplay of the 2015 film won her Oscar, Golden Globe, and BAFTA nominations.

Room is her seventh play; the first five are available as Emma Donoghue: Selected Plays (Oberon). Donoghue co-wrote the Netflix film The Wonder based on her Giller- nominated 2016 novel. Her other books include Akin, Frog Music, The Sealed Letter, (for younger readers) The Lotterys series, The Pull of the Stars and Haven. Her novel Learned by Heart (August 2023) is about the adolescence of diarist Anne Lister, inspiration for HBO/BBC’s Gentleman Jack. www.emmadonoghue.com

Cora Bissett (Director/Music & Lyrics) is a Scottish theatre and film director, actor, and songwriter. She was Associate Director at the National Theatre of Scotland, 2014- 2022, where her work includes Rites, Interference and the multi-award-winning Adam, the remarkable real-life story of an Egyptian trans man who settled in Glasgow. Adam went on to be adapted for a BBC-4 TV film in 2021, which she co-directed and for which she won a BAFTA Award for best scripted drama. Her latest show for NTS was the gritty hit new musical Orphans, based on the cult feature film by actor/director Peter Mullan. She set up her own company PACHAMAMA in 2010 with a strong emphasis on stories exploring societal injustice often based on or inspired by real life events. Her company’s first production was Roadkill, co-created with writer Stef Smith, which was based on real events involving sex trafficking in Scotland. It swept up every possible award at the Edinburgh Festival in 2010 and was then co-produced by Théâtre de la Ville in Paris, by St. Anne’s Warehouse in New York, and played at Chicago Shakespeare Theatre before winning a 2012 Olivier Award for Outstanding Production at Theater Royal Stratford East in London. She tackled the real-life story of The Glasgow Girls and turned it into a grime/hip-hop/folk/rock musical highlighting the heinous events known as Dawn Raids and the mistreatment of asylum seekers in the UK immigration system. It won the Amnesty Award for Freedom of Expression and the Off West End Award for Best New Musical. Her production of Grit: The Martyn Bennett Story, based on Scotland’s maverick musician, won Outstanding Event of the Year at the Scotts Trad Awards. As an actor, Cora toured David Greig’s Midsummer on multiple worldwide tours, including an Off-Broadway run and an extensive run at Sydney Opera House. As a writer, Cora penned her first full-length auto-biographical play, What Girls Are Made Of, in 2019. It charted her time as a teen singer in an indie rock band who were signed to the major label Phonogram in the early 90s. (‘entirely joyous celebration of female resistance’ Time Out) She won a Fringe First for the play and the Herald Culture Award for outstanding performance. She is currently adapting it as a TV series with Black Camel Productions.

Kathryn Joseph (Music & Lyrics). Intimate, fearlessly frank and with a fathoms-deep emotional resonance, Scottish singer/songwriter and musician Kathryn Joseph’s highly individual expression was first heard on 2015’s Bones You Have Thrown Me and Blood I’ve Spilled which bagged her the Scottish Album of the Year Award. Her follow up From When I Wake the Want Is, is of an equally devastating, understated intensity in terms of her heavily rhythmic piano work, striking vocals and vivid lyrics, but with a newly muscular edge and textured depth. Her new album For You Who Are the Wronged was released worldwide on April 22, 2022 via Rock Action Records.

Sam Julyan (Producer) creates new live content for new audiences, with the intention of pushing the boundaries of what commercial theatre can be. In addition to ROOM, recent productions include Carmen Jones (Classic Stage Company, New York, directed by John Doyle, starring Anika Noni Rose; four Lucille Lortel Award including Outstanding Revival); No Villain, world premiere of Arthur Miller’s first play (West End). In Development: The Work, Extremely Loud & Incredibly Close, Orphans and the stage adaptation of William Ivory’s Burton and Taylor. Supported by the Stage One bursary award, and a recent alumnus of the inaugural New York/London producer exchange between Stage One and Columbia University, Sam is a director of Covent Garden Productions, works as a lead producer for Histrionic Productions, and the David Glass Ensemble.

ShowTown Productions (Producer). Nathan Gehan and Jamison Scott are lead producers of the Tony-winning Broadway and tour productions of A Christmas Carol and co-producers of the Broadway and upcoming tour production of Into the Woods. They are executive producers for upcoming projects When Playwrights Kill,Romy & Michele and Syncing Ink. Nathan is the CEO of the general management firm ShowTown Theatricals. Broadway GM credits include In Residence on Broadway, The Boys in the Band, The Play That Goes Wrong, The Audience, Something Rotten!, Cirque du Soleil Paramour, and Motown the Musical — to name a few. Jamison is the creative producer at ShowTown Theatricals. His Broadway acting credits include Motown, Spider-Man, Memphis, and Grease! As a producer, he has worked in association with In Fine Company on A Taste of Things to Come, The Cher Show, Jagged Little Pill and Moulin Rouge!