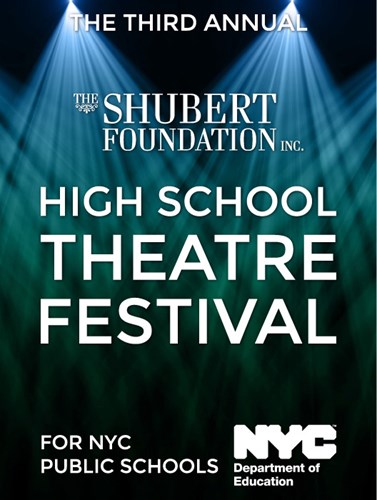 from the original cast of Hamilton

and upcoming star of

Okieriete “Oak” Onaodowan, hosts the event which showcases curated excerpts of 5 fully produced high school shows identified from a pool of 25 productions.  Oak created the memorable role of Hercules Mulligan  in the original production of Hamilton and will star in the hit musical, Natasha, Pierre & The Great Comet of 1812, beginning July 3rd, 2017.  Additional guest artist presenters include Shoba Narayan, Nicholas Belton and Paul Pinto from Natasha, Pierre & The Great Comet of 1812, and cast members from Dear Evan Hansen, who will be on hand to support these young NYC theatre artists.

The Festival is a celebration featuring five outstanding high school student productions from the 2016-2017 school year. The productions were selected from over 25 schools across the City by a panel of professional theatre artists and theatre educators.  Students from the following schools will present excerpted scenes and musical numbers from:

“Theatre instruction teaches students the importance of rehearsing, while building self-confidence and strengthening  public speaking skills” said New York City Schools Chancellor Carmen Fariña. “These are critical skills that prepare students for college, careers and beyond. That’s why I’m so pleased that we continue to expand access to theatre programs and arts education across the City. In particular, we are committed to leveraging the incredible connections we have to New York City’s rich cultural resources and developing meaningful arts partnerships with organizations like Shubert.”

“We are thrilled to present the third annual Shubert Foundation High School Theatre Festival,” said Philip J. Smith, Chairman of The Shubert Organization. “It’s a perfect expression of what we’re trying to accomplish by supporting arts education. I look forward to watching these New York City stars of tomorrow light up the stage at the Music Box.”

The High School Theatre Festival showcases the ongoing and excellent theatre work currently taking place in NYC public high schools, as well as highlighting the positive effects of theatre study on skills for the stage and in life: collaboration, artistry, discipline, focus, literacy, student voice, self-awareness, presence, active listening and empathy.  The evening focuses on the impact that a full theatre program can have on students and school communities, and enables students to see theatre and the arts as a potential career path.

“How inspiring for our student performers to have such unique support for their Broadway debut of their show excerpts, from a professional tech crew and pit musicians to the broader embrace of the theatre community,” said Peter Avery, the Festival’s producer and the Director of Theater for the NYC Department of Education.  “Given today’s discourse, it is all the more crucial to celebrate the next generation of diverse, talented artists in our NYC public schools.  These young men and women, representing a myriad of cultural and ethnic backgrounds, expand the definition of casting and collaborate to produce meaningful theatre for others.”

The Shubert Foundation, Inc. is the largest institutional funder of theatre education programs throughout NYC public schools and the nation’s largest private foundation dedicated to unrestricted funding of not-for-profit theatres, with a secondary focus on dance. In 2016, the Foundation provided more than $25.6 million to 506 not-for-profit performing arts organizations across the United States.  The Shubert Foundation, Inc. was established in 1945 by the legendary team of brothers, Lee and J.J. Shubert, producers of more than 520 plays, musicals and revues, as well as owners and operators of a nationwide network of legitimate theatres. For more information, visit www.shubertfoundation.org

The New York City Department of Education is the largest system of public schools in the United States, serving about 1.1 million students in more than 1,750 schools. The Department of Education supports universal access to arts education through the ArtsCount initiative, which tracks and reports student participation in arts education and holds schools accountable for meeting New York State Instructional Requirements for the Arts. For more information, visit http://schools.nyc.gov/offices/teachlearn/arts/index2.html.