The Shubert Pavillion Opens at The Actors Home, Englewood NJ 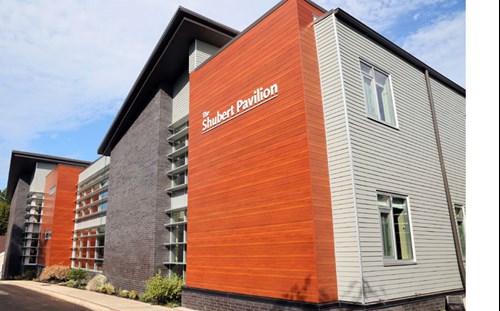 The Actors Fund Home in Englewood, New Jersey, an acclaimed assisted living and skilled nursing care facility for the performing arts and entertainment community, celebrated the opening of The Shubert Pavilion on Friday, October 6. The new three-story, state-of-the-art rehabilitation center adds 25 beds in the sub-acute center and 14 assisted living beds.

Philip J. Smith, Chairman of the Shubert Organization, stated, “The Shubert Pavilion represents our commitment to the future of The Actors Fund Home, one of the entertainment industry’s finest institutions.”

Shubert President Robert E. Wankel added, “We salute Jordan Strohl, The Actors Fund Home’s Administrator and the outstanding staff in Englewood who offer loving care every day to our friends and colleagues in residence.”

TAKE A VIDEO TOUR OF THE NEW SHUBERT PAVILION AT
THE ACTORS HOME HOSTED BY BRIAN STOKES MITCHELL,
CHAIRMAN, THE ACTORS FUND

“The dedication of The Shubert Pavilion is another milestone for us as we build on our history of providing essential programs and services for everyone who works in performing arts and entertainment,” said The Actors Fund Chairman, Brian Stokes Mitchell.

The new three-story Shubert Pavilion was made possible by a lead gift from The Shubert Organization, with major additional support from The Walt Disney Company and The Mackintosh Foundation.

The facility houses a 25 bed sub-acute center for people who are recovering from illness or surgery and 14 assisted living beds. The facility also includes a rehabilitation center with a fully equipped gym for physical, occupational and speech therapies. To prepare residents for a safe return to their private homes, the rehabilitation center is outfitted with a full kitchen, bathroom and laundry facilities, as well as accessible gardens for residents.

“The expansion and modernization realized in The Shubert Pavilion will allow us to serve more people, in more ways, with continued compassion and excellence,” stated The Actors Fund President and CEO, Joseph P. Benincasa.

WATCH AN AERIAL VIDEO OF THE NEW SHUBERT PAVILION

UNDER CONSTRUCTION (NO SOUND)

Since 1882, The Actors Fund has been helping performing arts and entertainment professionals. In 1902, The Fund opened its first retirement home in Staten Island, New York which moved to Englewood, New Jersey in 1928. Today, The Actors Fund Home continues a tradition of care through its assisted living and skilled care facility. The Actors Fund Home is a gold standard for senior care and a recipient of both U.S. News and World Report’s coveted “Best Nursing Homes in America” as well as the highest rating of five stars from the Center for Medicare and Medicaid Services.

The Shubert Organization has been in the forefront of American Theatre since its founding in 1900. The company has produced and co-produced hundreds of Broadway plays and musicals, including The Band’s Visit, Come From Away, Dear Evan Hansen, School of Rock –The Musical, CATS, The Curious Incident of the Dog in the Night-Time, Hedwig and the Angry Inch, King Charles III, Once, Hugh Jackman: Back on Broadway, Lucky Guy, The Audience, and, Fish in the Dark. Under the leadership of  Philip J. Smith, Chairman, and Robert E. Wankel, President, The Shubert Organization owns and operates 17 Broadway theatres and 6 Off-Broadway venues.