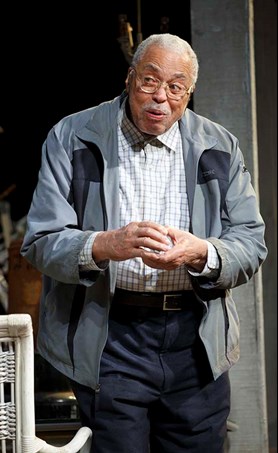 The Cort Theatre will be renamed the James Earl Jones Theatre

Mr. Jones’s Broadway career began in 1957, and in 1958 Mr. Jones played his first role at the Cort Theatre in Sunrise at Campobello. Over the following six-and-a-half decades Mr. Jones rose to star in countless stage and screen productions (including twenty-one Broadway shows), becoming one of a small number of lifetime “EGOT” (Emmy, Grammy, Oscar, Tony) winners. Mr. Jones’s Tony awards include Best Actor in a Play for The Great White Hope (1969) and Fences (1987), as well as a Lifetime Achievement Award in 2017. He has additionally won seven Drama Desk Awards and has been awarded the National Medal of Arts and the Kennedy Center Honor.

“The Shubert Organization is so incredibly honored to put James—an icon in the theatre community, the Black community, and the American community—forever in Broadway’s lights,” said Robert E. Wankel, Shubert CEO and board chair. “That James deserves to have his name immortalized on Broadway is without question.”

“For me standing in this very building sixty-four years ago at the start of my Broadway career, it would have been inconceivable that my name would be on the building today,” said Mr. Jones of Shubert’s decision to rename the Cort Theatre in his honor. “Let my journey from then to now be an inspiration for all aspiring actors.”

During the course of the COVID-19 pandemic, Shubert has performed extensive renovation and construction work at the site of the Cort Theatre (including construction of a new, contemporary wing off of the building’s western face). The work is planned for completion in the summer of 2022, and when the building reopens for productions, Shubert will hold a formal dedication ceremony.

Mr. Jones has appeared in fourteen Broadway productions at Shubert theatres, including two at the Cort Theatre. Most recently Mr. Jones portrayed Weller Martin across from Cicely Tyson’s Fonsia Dorsey in the 2015 Broadway revival of Donald L. Coburn’s The Gin Game at Shubert’s John Golden Theatre.

The Cort Theatre opened in 1912, having been designed in the style of an Eighteenth-Century French palace by renowned theatre architect Thomas Lamb to house productions of theatre impresario John Cort. The building was sold to the Shubert brothers in 1927.

The Shubert Organization is America’s oldest professional theatre company and the largest theatre owner on Broadway. Since the dawn of the 20th century, Shubert has operated hundreds of theatres and produced hundreds of plays and musicals, including the current Broadway shows Come From Away, Company and Macbeth and the upcoming Some Like It Hot. Shubert currently owns and operates 17 Broadway, six Off-Broadway theatres, and the Forrest Theatre in Philadelphia. Under the leadership of Robert E. Wankel, Chairman and CEO, The Shubert Organization continues to be a leader in the theatre industry. Shubert delivers innovative ticketing solutions via its Telecharge interface, API distribution, and private-label technology, offering unparalleled distribution and marketing to the theatre industry and beyond. Its consumer-facing brands—Telecharge for retail ticket sales and Broadway Inbound for group buyers, tour operators, and the travel industry—sell millions of tickets each year. The Shubert Foundation, sole shareholder of The Shubert Organization, Inc., is dedicated to sustaining and advancing live performing arts in the United States. The Foundation provides general operating support to not-for-profit theatres and dance companies. Foundation grants in 2021 totaled $32.1 million.