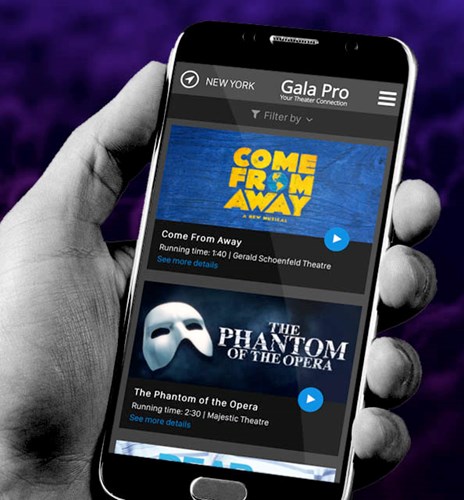 The GalaPro App makes the world of entertainment accessible and inclusive to everyone, at any venue, in any seat, anywhere in the world. GalaPro opens the curtains to a universal cultural experience by delivering automated multilingual subtitles, closed captioning, dubbing, audio description, and amplification to the user's own mobile device.

Based in Israel, GalaPro was founded in June 2015 by Dr. Elena Litsyn and Hagai Pipko, with the mission to guarantee that live performances and entertainment experiences are inclusive for everyone. Since its inception, GalaPro has been working to make shows, film and events accessible to everyone based on the company’s core value that culture and entertainment are foundational elements of our communities.

The innovative GalaPro app opens the doors to wider audiences and welcomes patrons who require access services or don’t speak the native language. The user-friendly app is available for free on the App store or Google play and offers venues an on-demand solution, for every performance without having to maintain and manage hardware. GalaPro’s state-of-the-art technology is based on patented speech-recognition which assures the content is delivered real-time directly to the user’s own device.

“The Shubert Organization has been a champion of the GalaPro App since its inception,” said David Andrews, Shubert’s Senior Vice President, Ticketing. “We’re proud to be able to take this one-of-a kind technology to new heights in our theatres and around the world.”

GalaPro is actively being used in over 80 theaters across North America, the United Kingdom, Germany, and Australia with the goal of making the entertainment industry accessible to audiences across the globe.

The Shubert Organization is America’s oldest professional theatre company and the largest theatre owner on Broadway. Since the dawn of the 20th century, Shubert has operated hundreds of theatres in New York City and throughout the United States. Shubert currently owns and operates 17 Broadway theatres, six off-Broadway venues, and the Forrest Theatre in Philadelphia. Under the leadership of Robert E. Wankel, Chairman and CEO, The Shubert Organization continues to be a leader in the theatre industry. Shubert delivers innovative ticketing solutions via its Telecharge interface, API distribution, and private-label technology, offering unparalleled distribution and marketing to the theatre industry and beyond. Its consumer-facing brands—Telecharge for retail ticket sales and Broadway Inbound for group buyers, tour operators, and the travel industry—sell millions of tickets each year. The Shubert Foundation, sole shareholder of The Shubert Organization, Inc., is dedicated to sustaining and advancing live performing arts in the United States. The Foundation provides general operating support to not-for-profit theatres and dance companies. Foundation grants in 2021 totaled $32.1 million.

Over the course of its 120-year history, Shubert has produced and co-produced hundreds of plays and musicals, including Cats (original and revival), Hugh Jackman - Back on Broadway, Passing Strange, Amour, Dirty Blonde, Passion, The Grapes of Wrath, City of Angels, A Few Good Men, The Heidi Chronicles, Jerome Robbins’ Broadway, Sunday in the Park with George, The Real Thing, Dreamgirls, The Life and Adventures of Nicholas Nickleby, Amadeus, Children of a Lesser God, Ain’t Misbehavin’, The Gin Game, Little Shop of Horrors (original Off-Broadway), School of Rock - The Musical, Hedwig and the Angry Inch, Once, The Curious Incident of the Dog in the Night-Time, The Band’s Visit, Come From Away, Dear Evan Hansen, and Company. The Shubert Organization is also a lead producer on the forthcoming Broadway productions of Macbeth (with Daniel Craig and Ruth Negga) and the new musical Some Like It Hot. For more information, visit www.shubert.nyc.