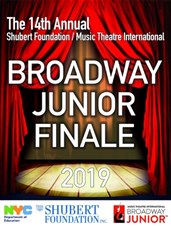 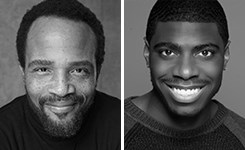 New York, NY (May 8, 2019) – The 14th annual Shubert Foundation/Music Theatre International Broadway Junior® Student Finale will take place on Tuesday, May 14, 2019 at 10:45 a.m. at Broadway’s Imperial Theatre (249 West 45th Street). The event will be hosted by James Harkness and Jawan M. Jackson, stars from Broadway’s new hit, Ain’t Too Proud – The Life and Times of The Temptations. The Shubert Foundation / MTI Broadway Junior® partnership is a groundbreaking musical theatre mentorship program that helps public schools affect school culture change through building sustainable theatre education programs. Hundreds of participating students will share musical numbers from their fully produced school shows at the Finale. For many, their first musical theatre experience performing will be on Broadway.

The program is sponsored by The Shubert Foundation, Music Theatre International (MTI) and the New York City Department Education (NYCDOE). In attendance at the Broadway Junior® Student Finale will be Philip J. Smith, Chairman and Co-CEO of The Shubert Organization, Robert E. Wankel, President and Co-CEO of The Shubert Organization, Michael I. Sovern, President of The Shubert Foundation, representatives from the Office of Arts and Special Projects for the NYC Department of Education, prominent NYC arts educators, and leading members of New York’s professional theatre community.

“As a lifelong musician, I understand the importance of equitable access to high-quality arts education in our public schools,” said NYC Schools Chancellor Richard A. Carranza. “I thank the Shubert Foundation and Music Theatre International for their partnership in supporting our students and expanding access to the mosaic of cultural experiences that makes New York the greatest city in the world.”

"I am enormously gratified, along with Team MTI to witness how this program has matured and expanded over 14 years. The unanticipated long term impact on the students, schools and local communities has gone beyond what any of us could have envisaged as the participating students are learning life skills, indispensable to their futures. These include the ability to collaborate, follow direction and instruction, practice self-discipline and work ethics, and use their imaginations while honing their verbal communication skills and developing social skills which will serve them well in navigating life. These are the great gifts to give a new generation, critical for success, and generally atypical of traditional curricula," said Freddie Gershon, Co-Chairman of MTI who conceived the Broadway Junior Musicals Program.

“What an incredible opportunity for our public middle school students to share the theatre they have learned in school – now on a Shubert Broadway stage. These first-time young artists collaborated with their peers and teachers to produce unique inspired musicals for their diverse school communities and a full number for a Broadway audience. A wonderful reminder of the power of theatre education and inclusivity on stage, in the classroom and beyond,” said Peter Avery, the Festival's producer and the Director of Theatre for the NYC Department of Education.

The 2019 Broadway Junior® Student Finale will present performances from middle school groups participating in the second year of the program:

Since 2005, The Shubert Foundation has provided more than $5.4 million to the New York City Department of Education for Theatre/Arts programs. This year marks the Foundation's 14th year providing funds for The Shubert Foundation/MTI Broadway Junior® program which was founded during the 2005-2006 school year. To date, 110 schools and more than 11,500 students have participated in the program. Currently 80 schools are involved in the program.

The Shubert Foundation, Inc. is the largest institutional funder of theatre education programs throughout NYC public schools and the nation's largest private foundation dedicated to unrestricted funding of not-for-profit theatres, with a secondary focus on dance. In 2018, the Foundation provided more than $30 million to 533 not-for-profit performing arts organizations across the United States. The Shubert Foundation, Inc. was established in 1945 by the legendary team of brothers, Lee and J.J. Shubert, producers of more than 520 plays, musicals and revues, as well as owners and operators of a nationwide network of legitimate theatres. For more information, visit www.shubertfoundation.org

Music Theatre International (MTI) is one of the world's leading theatrical licensing agencies, granting theatres from around the world the rights to perform the greatest selection of musicals from Broadway and beyond. Founded in 1952 by composer Frank Loesser, and orchestrator Don Walker, MTI is a driving force in advancing musical theatre as a vibrant and engaging art form. MTI works directly with the composers, lyricists and book writers of these musicals to provide official scripts, musical materials and dynamic theatrical resources to over 70,000 professional, community and school theatres in the US and in over 60 countries worldwide. MTI is particularly dedicated to educational theatre, and has created special collections to meet the needs of various types of performers and audiences. MTI’s Broadway Junior® shows are 30- and 60-minute musicals for performance by elementary and middle school-aged performers, while MTI’s School Editions are musicals annotated for performance by high school students. MTI maintains its global headquarters in New York City with additional offices in London (MTI Europe) and Melbourne (MTI Australasia). For more information, visit www.mtishows.com.

The New York City Department of Education is the largest system of public schools in the United States, serving about 1.1 million students in approximately 1,800 schools. The Department of Education supports universal access to arts education through the ArtsCount initiative, which tracks and reports student participation in arts education and tracks progress at the school and city-wide levels for meeting New York State Instructional Requirements for the Arts. For more information, visit NYC DOE Office of Arts and Special Projects.