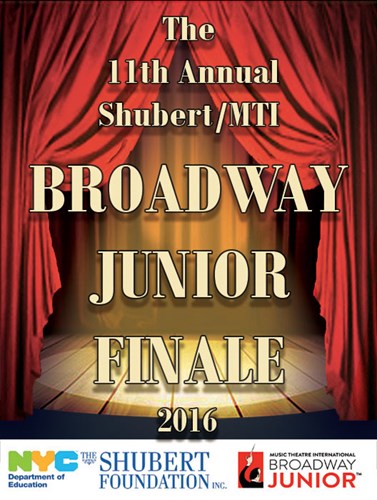 Students from Brooklyn, Bronx, Queens and Manhattan will perform song and dance numbers from their school versions of Broadway musicals. The shows include Disney’s The Lion King JR, Fame JR, Guys and Dolls JR., Annie JR, Hairspray JR, and Shrek the Musical JR.

“In the arts capital of the world, it’s so important that all our students – regardless of their zip code – have access to a great arts education, which teaches them to create, rehearse, and revise in the pursuit of mastery. That’s why the City is investing an additional $23 million in the arts annually,” said School’s Chancellor Carmen Fariña. “In particular, we want our students to interact with our cultural institutions, including Broadway. I thank the Shubert Foundation and Music Theatre International for their invaluable partnership, and for their work broadening and brightening our students’ education.”

"I am enormously gratified, along with Team MTI to witness how this program has matured and expanded over 11 years. The unanticipated long term impact on the students, schools and local communities has gone beyond what any of us could have envisaged as the participating students are learning life skills, indispensable to their futures. These include the ability to collaborate, follow direction and instruction, practice self-discipline and work ethics, and use their imaginations while honing their verbal communication skills and developing social skills which will serve them well in navigating life. These are the great gifts to give a new generation, critical for success, and generally atypical of traditional curricula," said Freddie Gershon, Chairman and CEO of MTI who conceived the Broadway Junior Musicals Program.

“Many participating schools, which previously had limited arts programs, have come to consider themselves arts schools. Even beyond the direct effect on students, principals have commented on the larger learning culture that Shubert/MTI Broadway Junior promotes and helps develop,” according to Peter Avery, the event’s Producer and the Director of Theater, NYC Department of Education. Similarly, teachers, who didn’t realize they had talent as a theater director, musical director, choreographer or designer, have become arts leaders in their schools and communities.”

The Shubert Foundation / MTI Broadway Junior™ program engages students in all aspects and areas of the arts, utilizing master teachers and expert production advisers from the educational theatre organizations, iTheatrics and ArtsConnection.

The 2016 Broadway Junior 11th Annual Celebration will present performances from middle school groups participating in the second and third year of the program:

Disney's Beauty and the Beast Jr

Soundview Academy for Culture and Scholarship

Music Theatre International (MTI) is one of the world's leading theatrical licensing agencies, granting schools as well as amateur and professional theatres from around the world the rights to perform the largest selection of great musicals from Broadway and beyond.  MTI works directly with the composers, lyricists and book writers of these shows to provide official scripts, musical and dynamic theatrical resources to over 70,000 theatrical organizations in the US and in over 60 countries worldwide.  MTI’s Broadway Junior™ collection of musicals, are developmentally appropriate 30 and 60-minute shows for elementary and middle school-aged performers. Since 1996, over 100,000 Broadway Junior™ productions have taken place around the world involving over 500,000 educators and over 5 million student performers. For more information, visit www.mtishows.com.