THE PROM the Musical Comedy with Issues is Broadway Bound 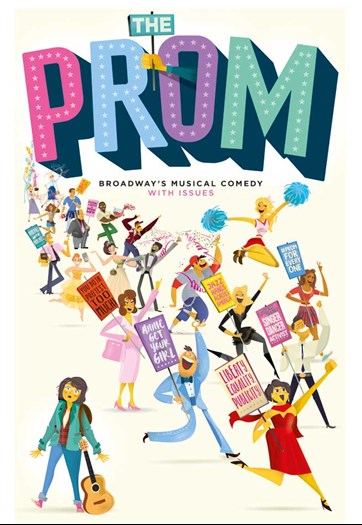 AT A SHUBERT THEATER TO BE ANNOUNCED

(New York, NY) Producers and co-Presidents of the Prom Committee Dori Berinstein and Bill Damaschke announced today that the hilarious new Broadway musical comedy THE PROM will officially open on Broadway on Thursday, November 15, 2018 at a Shubert theater to be announced.

We’ve got trouble, folks, right here in Indiana and when Broadway’s brassiest hear a student is unceremoniously sidelined from a small-town Indiana prom – and the press is involved – they are ready to kick-ball-change the world. A new musical comedy about the power of love (and a good 11 o’clock number), THE PROM is about so much more than just a dance.

“Bob Martin, Matthew Sklar and Chad Beguelin have created an original musical comedy that is equal parts witty, joyful and fun, filled with so much heart,” said director/choreographer Casey Nicholaw, “THE PROM is a celebration of individuality and the power of being you, which is a story that we all need to be telling right now.”

BOB MARTIN (Book) has been working as an actor and writer in theatre, film and television for over 3 decades. He has received many awards in both Canada and the US, including a Tony for his work on the Broadway production of The Drowsy Chaperone. Recent TV projects include Slings & Arrows I, II & III, (TMN, Sundance), Michael: Tuesdays and Thursdays (CBC), Michael: Everyday (CBC), Sensitive Skin I & II (HBO), and Elf: Buddy’s Musical Christmas (NBC). Recent theatre projects include The Prom (Atlanta), Gotta Dance (Chicago), Elf (Broadway, Dublin, London), Minsky’s (LA), The Drowsy Chaperone (Toronto, Broadway, London), Second City Toronto (Performer, Director, Artistic Director), and in development: Millions, Half Time, The Sting, The Princess Bride.

ANN ROTH (Costume Design) is a Tony Award-winning costume designer for her work on The Nance. She also garnered Tony nominations for The Book of Mormon, Shuffle Along, The Royal Family, The Crucifer of Blood and The House of Blue Leaves. Theatre credits include the upcoming Meteor Shower, Three Tall Women, The Minutes and Carousel as well as The Front Page, Misery, Fish in the Dark, A Delicate Balance, This Is Our Youth, A Raisin in the Sun, Betrayal, Hurlyburly, The Best Little Whorehouse in Texas, Singin’ in the Rain, Purlie, Waiting For Godot and The Odd Couple. As Academy Award winner for The English Patient, Roth’s additional film credits include Julie & Julia, The Reader, Doubt, Closer, The Village, Cold Mountain, The Hours, The Talented Mr. Ripley, The Birdcage, The Mambo Kings, Working Girl, Silkwood, 9 to 5, Hair, Klue and Midnight Cowboy. Television credits include “Angels in the America” and “Mildred Pierce.” Roth received the TDF Irene Sharaff Lifetime Achievement Award and was inducted into the Theater Hall of Fame in 2011.

MATTHEW PACHTMAN (Costume Design) has designed costumes for Glimmerglass Opera, Cape Playhouse, Two Turns Theatre Company, NYMF and NY Fringe Festival. He has been the associate costume designer on more than 35 Broadway productions, including 16 collaborations with designer Ann Roth, from The Book of Mormon to Meteor Shower. He has worked on projects with NY Theatre Workshop, Roundabout Theatre Company, Manhattan Theatre Club, and Lincoln Center Theater. Film credits include work on Bridge of Spies and My Week with Marilyn.

KENNETH POSNER (Lighting Design) has more than 50 Broadway play and musical theatre credits. He designs extensively off-Broadway, for resident theatres and touring productions throughout the United States as well as internationally. Selected Broadway credits: War Paint, Tuck Everlasting, On Your Feet, If/Then, Kinky Boots, Pippin, Cinderella, Hairspray, Dirty Rotten Scoundrels, Legally Blonde, Catch Me If  You Can, The Coast of Utopia - Shipwrecked, Other Desert Cities, The Merchant Of Venice,  Side Man, The Adventures of Tom Sawyer, Finding Neverland and Wicked. He is the recipient of the TONY, Drama Desk, Outer Critics’ Circle, Lucile Lortel and OBIE Awards.

MILAGROS MEDINA-CERDEIRA (Make-Up Design). Makeup design for Aladdin, Mean Girls, Present Laughter, Tuck Everlasting, Something Rotten!, The Rocky Horror Show and makeup design consultant for Sister Act. She has worked as a makeup artist on Broadway for more than 18 years, including Spider-Man, Mary Poppins, The Lion King, Into the Woods, Bells Are Ringing, The Wild Party, Tango Argentino, Little Me, The Wizard of Oz, The King and I and Kiss of the Spiderwoman and has worked with the esteemed Eartha Kitt and Diahann Carroll.

MARY-MITCHELL CAMPBELL (Music Direction) is a music director, conductor, orchestrator, composer and arranger in the Broadway community. This past fall she was Kristin Chenoweth's sidekick in My Love Letter To Broadway. Her New York credits include: Tuck Everlasting, Finding Neverland, Big Fish, Company, Sweeney Todd, Road Show, Sweet Charity, Allegro, Hello Again, Next to Normal, The Addams Family. She won a Drama Desk for Best Orchestrations for Company. She is passionate about arts education and poverty reduction. She is the Executive Director of ASTEP- Artists Striving To End Poverty (www.asteponline.org) which recruits and trains high level artists to work with kids in extreme situations to teach them health education and life skills through the arts. She is from North Carolina and has taught on the faculties of Juilliard, NYU, and Boston College.

BILL DAMASCHKE (Producer) is the President of Animation and Family Entertainment for Skydance Media, where he serves as the key architect setting the overall creative direction and strategy for Skydance.  In conjunction with the company’s feature film and television division, he curates and oversees a team dedicated to producing a bold and original slate of both animated and hybrid family programming.  Previously, he spent 20 years at DreamWorks Animation, most recently as Chief Creative Officer, where he was involved in the creative, artistic, and operational direction of the company.  His tenure oversaw the release of some of the company’s big franchise films, including Madagascar, Kung Fu Panda, How to Train Your Dragon, and The Croods.  He also oversaw all of DreamWorks Animation’s live theatrical productions, including the award-winning Shrek The Musical. Bill’s other current projects as a producer are the Broadway-bound musical Half Time, directed and choreographed by Jerry Mitchell, which will be presented at the Paper Mill Playhouse in Spring of 2018, and the stage adaptation of Moulin Rouge, directed by Alex Timbers, on which Bill serves as Executive Producer.