THE LIGHTNING THIEF to Open on Broadway 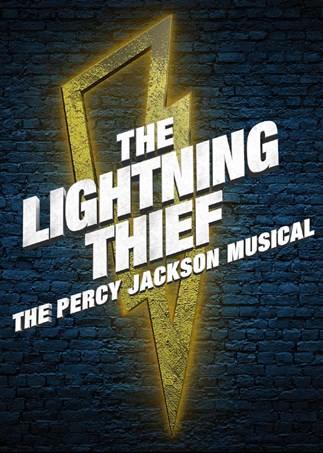 “THE LIGHTNING THIEF IS A BLAST – AND THAT’S NO MYTH!
SWEEPS YOU UP. IT HAS SOMETHING FOR EVERYBODY.”
– The Boston Globe

To Open on Broadway

TheaterWorksUSA and Martian Entertainment are thrilled to announce that The Lightning Thief: The Percy Jackson Musical, the original musical adaption of Rick Riordan’s New York Times best-selling novel, will arrive on Broadway this fall for a strictly limited 16-week holiday engagement at the Longacre Theatre (220 W. 48th Street) following the recent successful conclusion of its 32-city North American First National Tour which has been celebrated by audiences and critics alike.

With a book by Joe Tracz (Be More Chill) and original music and lyrics by Rob Rokicki (Broadway debut), The Lightning Thief will begin performances Friday, September 20 ahead of a Wednesday, October 16 opening night.

As a son of Poseidon, Percy Jackson has newly discovered powers he can’t control, monsters on his trail, and is on a quest to find Zeus’ lightning bolt to prevent a war between the Greek gods. Based on the best-selling novel by Rick Riordan and featuring a thrilling original rock score, with an onstage company of seven playing more than 47 characters, The Lightning Thief is an action-packed theatrical adventure about accepting that normal is a myth and embracing the superpowers inside all of us.

Casting for The Lightning Thief’s Broadway run will be announced soon.

The original TheaterWorksUSA musical production of The Lightning Thief: The Percy Jackson Musical debuted in spring 2017 at the Lucille Lortel Theater in New York City with a sold-out, six-week run which was nominated for three Drama Desk Awards including Outstanding Musical. The Original Cast Recording, available from Broadway Records [and available on Spotify, was released in June 2017 and soon hit #1 on iTunes’ soundtrack chart. A subsequent North American First National Tour launched in Chicago in January 2019 and concluded successfully last month at Boston’s Huntington Theatre Company.

The Lightning Thief has a book by Joe Tracz (Be More Chill), music and lyrics by Rob Rokicki (Broadway debut), and is directed by Stephen Brackett (Be More Chill, A Strange Loop), with choreography by Patrick McCollum (The Band’s Visit), with set design by Lee Savage (Satchmo at the Waldorf), costume design by Sydney Maresca (Hand to God), lighting design by David Lander (Torch Song), sound design by Ryan Rumery (Be More Chill), puppet design by AchesonWalsh (On the Town), fight direction by Rod Kinter (Red Roses, Green Gold), hair, wigs, and makeup design by Dave Bova (Be More Chill), and orchestrations by Wiley DeWeese (First Daughter Suite, Preludes) and Rob Rokicki. The production is being presented by special arrangement with Rick Riordan and the Gallt & Zacker Literary Agency.

JOE TRACZ (Book) is the writer of Broadway's Be More Chill (with Joe Iconis) and Poster Boy (with Craig Carnelia, Williamstown Theater Festival). TV/film work includes all three seasons of Netflix's "A Series of Unfortunate Events." Joe is an alumnus of the Ars Nova Play Group, a former Playwrights Realm writing fellow, and for The Lightning Thief, a Drama Desk nominee for Best Book. He has a B.A. from Kalamazoo College and an M.F.A. from NYU Tisch.

RICK RIORDAN (Original Author) is the author of five #1 New York Times bestselling series, including the Percy Jackson series, the Kane Chronicles, the Heroes of Olympus series, the Magnus Chase series and the Trials of Apollo, with the fourth book in that series, The Tyrant’s Tomb due out in October 2019. He is also the author of the multi award-winning Tres Navarre mystery series for adults. For 15 years Rick taught English and history at public and private middle schools in the San Francisco Bay Area and in Texas. While teaching in San Antonio, Saint Mary’s Hall honored him with the school’s first Master Teacher Award. While teaching fulltime, Riordan began writing mystery novels for grownups. His Tres Navarre series went on to win the top three national awards in the mystery genre—the Edgar, the Anthony and the Shamus. Today over 96 million copies of his books are in print in the United States and rights have been sold into more than 38 countries and translated into 42 languages. Rick is the publisher of Rick Riordan Presents, an imprint at Disney-Hyperion dedicated to publishing own-voices fiction for young readers based on world cultures and mythologies. Twentieth Century Fox adapted the first two books of his Percy Jackson series. His books have spawned related media, such as graphic novels and short story collections. Rick Riordan now writes full time. He lives in Boston with his wife and two sons.