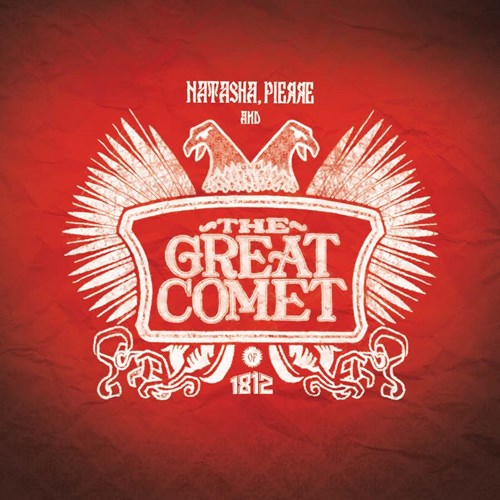 Full casting has been announced for the new musical THE GREAT COMET, featuring the Broadway debuts of 18 cast and creative team members including Josh Groban as ‘Pierre’ and Denée Benton as ‘Natasha.’ Created by Dave Malloy (Preludes, Ghost Quartet) and directed by Rachel Chavkin (Small Mouth Sounds, Preludes) – also making their Broadway debuts – THE GREAT COMET will blaze into Broadway’s Imperial Theatre (249 West 45th Street) beginning in the first week of October with opening night set for Monday, November 14, 2016. Ticketing info will be announced shortly. To sign up for news updates and presale ticketing opportunities, visit www.greatcometbroadway.com.

THE GREAT COMET is a theatrical experience like no other. Malloy’s inspired adaptation of a 70-page slice of War and Peace puts audiences just inches away from Tolstoy’s brash young lovers, as they light up Moscow in an epic tale of romance and passion.

The New York Times calls THE GREAT COMET “a heaven-sent fireball” (Brantley) and “vibrant, thrillingly imagined” (Isherwood), Entertainment Weekly calls it “a stunning, blazingly original musical,” and the New York Post calls it “inventive, ravishing and full-on romantic.” The Original Off Broadway Cast Recording can be purchased on iTunes.

THE GREAT COMET recently played a limited engagement at the American Repertory Theater in Cambridge where its innovative design was expanded to bring the show’s signature staging to a traditional proscenium-style theatre.

THE GREAT COMET has been showered with rave reviews and a host of accolades, including the 2013 Richard Rodgers Award for Musical Theater, a Special Citation from the OBIE Awards, five Drama Desk Award Nominations, two Drama League Award nominations, a Henry Hewes Design Award, and the Off-Broadway Alliance Award for Outstanding New Musical.

THE GREAT COMET will be produced on Broadway by Howard & Janet Kagan and Paula Marie Black.

THE GREAT COMET was originally commissioned and developed at Ars Nova in NYC where it had its world premiere in the fall of 2012, and was soon-after transferred to a custom-built venue in the Meatpacking District for the summer of 2013. The show became a sensation and the entire venue was transferred to the Theater District where it continued its run into the spring of 2014.

JOSH GROBAN (Pierre). Possessing one of the most outstanding and instantly recognizable voices in music, singer, songwriter, and actor Josh Groban has entertained fans across the globe with his multi-platinum albums and DVDs (over 35 million sold worldwide), electrifying live performances, and comedic film and television appearances. The 35-year-old Los Angeles native is the only artist who has had two albums appear on the Top 20 Best-Selling Albums list of the past decade, according toBillboard. He has appeared in the feature films Crazy, Stupid, Love, Coffee Town, and Muppets Most Wanted, as well as on CBS’ Life In Pieces, NBC’s The Office, FX’s It’s Always Sunny in Philadelphia, and CBS’ The Crazy Ones. Groban has released seven studio albums, 2001’s self-titled double-platinum debut, 2003’s multi-platinum Closer, 2006’s double-platinum Awake, 2007’s quadruple-platinum Grammy-nominated Noel, 2010’s platinum Illuminations, and 2013’s All That Echoes, which debuted at No. 1 on the Billboard Top 200 chart, giving Groban his first No. 1 debut and third chart-topper. The album earned Groban some of his best reviews to date. In April 2015, Groban released Stages, a collection of some of the greatest songs from musical theater. The album was nominated for a 2016 Grammy Award for Best Traditional Pop Vocal Album. In February 2016 Groban released a CD/DVD package, entitled Stages Live, featuring performances recorded at the historic Los Angeles Theater in downtown L.A. for his all-new PBS special Josh Groban: Stages Live. In July, he will embark on an extensive North American tour to support Stages, entitled “Josh Groban: On Stage.” An active arts education philanthropist and advocate, Groban is a member of Americans for the Arts Artists Committee and Groban’s Find Your Light Foundation helps enrich the lives of young people through arts, education, and cultural awareness.

DENÉE BENTON (Natasha) played the role of ‘Natasha’ in The Great Comet at A.R.T. She starred as 'Nabulungi' in the West End and US National Tour of The Book of Mormon. Her regional credits include Annie, Sunset Boulevard, and Fiddler on the Roof at Pittsburgh Civic Light Opera. She recently joined season two of Lifetime's new hit television series Unreal as Ruby and is currently shooting in Vancouver. She is a 2014 graduate of Carnegie Mellon University.

BRITTAIN ASHFORD (Sonya) will make her Broadway debut in The Great Comet in the role she originated at Ars Nova and received a Lucile Lortel nomination for during its run at Kazino. She's also appeared in Dave Malloy's Ghost Quartet (Bushwick Starr, The Heath, Curran: Under Construction, A.R.T.) and fronts her own band, Prairie Empire.

GELSEY BELL (Princess Mary), is a singer, songwriter, and scholar. Described by the New York Times as a “winning soprano” and the “future of experimental vocalism,” her multi-disciplinary work has been presented internationally. She is a member of thingNY and Varispeed, and Dave Malloy’s Ghost Quartet, and has a PhD from NYU in performance studies. www.gelseybell.com

PAUL PINTO (Balaga) is a composer, writer and performer. He's a founder of experimental music ensembles thingNY and Varispeed. An album of his poetic compositions, minis/Trajectories is set to be released in September, and he's writing a psychedelic new electronic opera called Thomas Paine in Violence for the HERE Art Center. pfpinto.com

SCOTT STANGLAND (Pierre standby) is a New York-based actor and musician. Select theatre: Once, the Musical (Broadway); Natasha, Pierre, and the Great Comet of 1812 (A.R.T.); The Wheel (Steppenwolf Theatre). Select TV/film: Crisis, Chicago Fire (NBC), Gifted Hands: The Ben Carson Story (TNT); Contagion, and End of the Tour. Scott received his MFA from The Theatre Conservatory at Roosevelt University. Scott also plays in the band Youth in a Roman Field.

LUCAS STEELE (Anatole) Broadway: The Threepenny Opera. Off-Broadway: has originated numerous leading roles including Myths and Hymns at Prospect Theater Company, The Kid at The New Group, and Natasha, Pierre, and the Great Comet of 1812 for which he received a Lucille Lortel award for his portrayal of Anatole Kuragin.

DAVE MALLOY (Book, Music, and Lyrics) is a composer/writer/performer/sound designer. He has written eleven musicals, including Natasha, Pierre & The Great Comet of 1812, in which he also originated the role of Pierre. Other shows include Ghost Quartet, a song cycle about love, death, and whiskey; Preludes, a musical fantasia set in the hypnotized mind of Sergei Rachmaninoff; Three Pianos, a drunken romp through Schubert’s “Winterreise”; Black Wizard/Blue Wizard, a philosophical escapist fantasy; Beowulf – A Thousand Years of Baggage; Beardo; Sandwich; Clown Bible; and (The 99-cent) Miss Saigon. He has won two OBIE Awards, the Richard Rodgers Award, an ASCAP New Horizons Award, and a Jonathan Larson Grant, has been a Guest Professor in devised music theater at Princeton and Vassar Universities, and is the composer for Banana Bag & Bodice. Future projects include adaptations of Moby-Dick and Shakespeare’s Henriad. He lives in Brooklyn. davemalloy.com

PALOMA YOUNG (Costume Designer) continues her work with Natasha, Pierre and the Great Comet of 1812 (Kazino, American Repertory Theatre, Ars Nova) for which she received a Drama Desk nomination and a Lucille Lortel Award. She won a Tony Award for Peter and the Starcatcher. Paloma is also the designer for Broadway's upcoming The Bandstand.

OR MATIAS (Music Director) is an Israeli music director and composer living in NYC. Or has written extensively for theater and dance, and is currently working on a musical adaptation of The Wave- the 1967 experiment which turned an entire high school into a proto-fascist movement. In the summer of 2015 he played the role of Sergei Rachmaninoff in Lincoln Center's production of Preludes. His performance was described as "marvelous" by the New York Times and "ravishing" by Variety. He has also recently music directed at The Public Theater and A.R.T, and will serve as orchestrator and arranger for the upcoming production of Nickel Mines at the NYMF festival. A Juilliard and NYU graduate, Or is very passionate about developing new work, and is thrilled to reprise his role as music director for Natasha, Pierre, and the Great Comet of 1812!