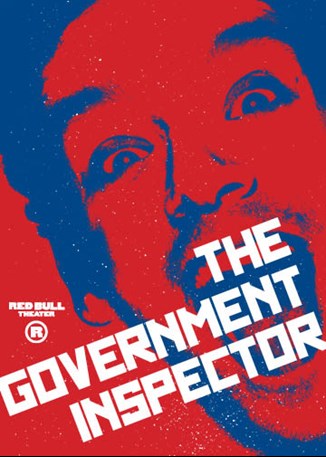 
THE MOST ACCLAIMED COMEDY OF THE SEASON IS NOW PLAYING AT

Here's a sampling of what the critics have said:

CRITIC'S PICK! "Generates the kind of collective enthusiasm in its audience that you associate with home-team football games. The pleasures afforded by this breakneck show - directed by Jesse Berger and featuring a virtuosic cast led by a path-clearing cyclone of silliness called Michael Urie - are as old as the days when cave dwellers discovered that human stupidity was really kind of funny...As this play's misleading protagonist, Mr. Urie establishes himself as a bona fide leading man, in the tradition of great physical comedy performers like Kevin Kline." -Ben Brantley, New York Times

FOUR STARS! "A play that depicts a politician as a greedy, vindictive, incompetent boob desperate to ingratiate himself to the leader of Russia? Admittedly, The Government Inspector may no longer sound like comedy. But humor is doled out generously in Red Bull Theater's diverting production of Nikolai Gogol's 1836 satire, zippily adapted by Jeffrey Hatcher." - Adam Feldman, Time Out NY

"Jeffrey Hatcher retains the original framework but gives the jokes a zingy modern spin. Jesse Berger, who directs the raucous Red Bull Theatre production, freely mixes in bits from the Marx Brothers, the Three Stooges, and Woody Allen. Michael Urie is charming as hell as the lucky and manipulative object of mistaken identity (his drunk scene is a comic masterpiece), while Arnie Burton does superlative double duty as a cynical servant and a postmaster who reads all the mail. As the mayor, Michael McGrath bluffs and blusters to the hilt, and Mary Testa, as his wife, earns big laughs just by changing the pitch of her voice." - The New Yorker

All politics are local. Gogol's deeply silly satire of small-town corruption offers a riotous portrait of rampaging self-delusion. When the crooked leadership of a provincial village discovers that an undercover inspector is coming to root out their commonplace corruption, the town weaves a web of bribery, lies, and utter madness. This New York Premiere of acclaimed playwright Jeffrey Hatcher's (Stage Beauty) adaptation offers a hilarious reminder of the timelessness of bureaucracy and buffoonery.

Nikolai Gogol was born on April Fool's Day in 1809 in the Ukraine, then part of Russia. His classmates at school, observing his various physical and social peculiarities, nicknamed him ''the mysterious dwarf.'' In 1828, Gogol arrived in Saint Petersburg and obtained a series of low-level, low-paying posts in the government bureaucracy, which he apparently found unrewarding. Gogol began teaching at a girl's boarding school in 1831. Evenings on a Farm Near Dikanka , Gogol's two-volume collection of stories derived from Ukrainian folklore, was published in 1832 and was instantly well received, gaining Gogol the attention of Aleksandr Pushkin, Russia's leading literary figure, who provided him with the idea for the plot of The Government Inspector. In 1834, Gogol began a position at Saint Petersburg University, where he quickly proved himself a resounding failure, leaving the post after only one year. During that year, Gogol published two books of short stories, a collection of essays, and two plays: Marriage and The Government Inspector. The Government Inspector was brought to the attention of the Tsar, who liked it so much that he requested the first theatrical production in 1836. Gogol, reacting to heavy criticism by the government officials his play lampooned, declared that ''everyone is against me'' and left Russia. He spent the next twelve years in self-imposed exile. After Pushkin died in 1837, Gogol was the leading Russian writer of the day. Gogol's literary masterpiece Dead Souls and the first edition of his collected works were published in 1842. In 1848, he returned to Russia, settling in Moscow. In 1852, Gogol died, age 42, as the result of an extreme religious fast and absurdly bad doctoring.

Red Bull Theater, hailed as "the city's gutsiest classical theater" by Time Out New York, is the not-profit Off-Broadway theater company specializing in plays of heightened language. With the Jacobean plays of Shakespeare and his contemporaries as its cornerstone, Red Bull Theater embraces the imagination of theatergoers through intimate, imaginative productions of great classic stories from all eras and cultures.

Acclaimed as "a dynamic producer of classic plays" by The New York Times, Red Bull Theater has previously staged productions of Pericles, The Revenger's Tragedy, Edward the Second, Women Beware Women, The Duchess of Malfi, The Witch of Edmonton, The Maids, The Dance of Death, Loot, The Mystery of Irma Vep, Volpone, 'Tis Pity She's A Whore, The Changeling, last season's hit revival of The School For Scandal as well as this season's election-timed, hit production of Shakespeare's Coriolanus at Barrow Street Theatre. The company's work has been hailed as "the most exciting classical theater in New York" (Time Out New York), "Dynamite!" (The New York Times), "Triumphant" (Associated Press), and "Proof that classical theater can still be surprising after hundreds of years" (Variety).