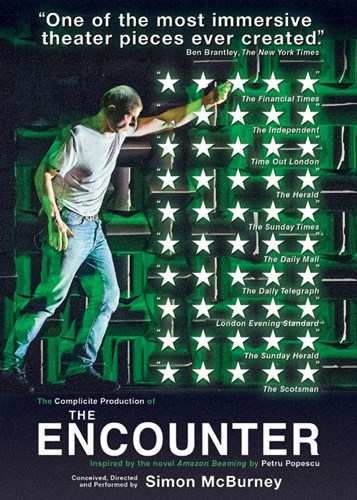 Limited engagement on Broadway this fall

Inspired by the book Amazon Beaming by Petru Popescu

at the John Golden Theatre

Direct from London and an international tour, Complicite’s acclaimed production of The Encounter, conceived, directed and performed by Simon McBurney, will play a limited engagement at Broadway’s John Golden Theatre (252 West 45th Street), opening on Thursday, September 29 and closing on January 8 2017. Previews begin on September 20.

Critics have reached for superlatives to describe the transcendent and unforgettable event which has stunned audiences in its previous engagements in London, Edinburgh and across Europe.

In 1969, Loren McIntyre, a National Geographic photographer, found himself lost among the people of the remote Javari Valley in Brazil. It was an encounter that was to change his life: bringing the limits of human consciousness into startling focus.

The Encounter was inspired by the novel “Amazon Beaming” by Petru Popescu. The Financial Times called it “An aural and visual delight. A tour de force.”

Simon McBurney traces McIntyre’s journey into the depths of the Amazon rainforest, using binaural technology (3D audio) to build an intimate and shifting world of sound. Audience members are given headphones to be worn throughout the performance in order to fully experience the visually stunning world created on stage - and inside their heads. Through innovative aural technology and brilliant storytelling, this is a heart-stopping, riveting, and slyly witty night of theater

Richard Katz will perform the role at certain performances.

The Encounter runs two hours with no intermission.  For more information regarding hearing impaired customers, please visit the show’s website.

SIMON McBURNEY is an actor, writer, director, and co-founder of Complicite, where he has created more than 30 productions. His work, from site-specific installations to the reinvention of classic texts on Broadway, continuously resists definition. His New York credits include three acclaimed Complicite productions: Mnemonic (conceived, directed and performed), A Disappearing Number (conceived and directed), The Chairs (Broadway, directed), as well as All My Sons (Broadway, directed) and The Resistible Rise of Arturo Ui with Al Pacino (directed). The Street of Crocodiles, Shun-kin and The Elephant Vanishes were all seen at Lincoln Center Festival. His other directing credits with Complicite include Ungeduld des Herzens, The Master and Margarita, Measure for Measure, A Minute Too Late, Pet Shop Boys Meet Eisenstein and Strange Poetry. Opera credits include The Magic Flute and A Dog’s Heart, both produced by De Nederlandse Opera and English National Opera in collaboration with Complicite. Simon was the first British Artiste Associé at Festival d’Avignon in 2012 with The Master and Margarita opening the Festival. In 2009 he was awarded the Yomiuri Theatre Award Grand Prize for Best Director for Shun-kin (the first non-Japanese artist to receive the award) and he was the recipient of the 2008 Berlin Academy of Arts Konrad Wolf Prize for Europe’s Outstanding Multi-disciplinary Artists. His many film and TV acting credits include: “The Conjuring 2,” “Mission: Impossible - Rogue Nation,” “The Theory of Everything,” “Magic in the Moonlight,” “Jane Eyre,” “Tinker Tailor Soldier Spy,” “Harry Potter,” “The Last King of Scotland” and “Body of Lies” and for BBC Television “Rev” and JK Rowling’s “The Casual Vacancy”.

RICHARD KATZ is an actor and theatremaker who has worked with Complicite since 1999, and has been collaborating on the development of The Encounter since 2010. His productions with the company include The Master and Margarita, Measure for Measure, The Noise of Time and Mnemonic. Other theatre includes 1984 (Headlong), The Lorax (Old Vic), As You Like It, Comedy of Errors, Romeo and Juliet, The Winter’s Tale, Pericles, The Drunks and Filter’s Silence (RSC), Spyski (Peepolykus and Lyric Hammersmith), The Hanging Man, Cinderella and Lifegame (Improbable), Senora Carrera’s Rifles, Arabian Nights (Young Vic), Way to Heaven (Royal Court), Nell Gwynn, A Midsummer Night’s Dream, The Golden Ass (Globe Theatre), Aladdin, Don’t Laugh it’s my Life (Told By An Idiot), King Ubu (Gate), Warhorse, Wind in the Willows, The Skriker and In Savoy (National Theatre). Film credits include “The Infiltrator,” “Guardians of the Galaxy,” “Enigma,” “Sixty Six” and “Start.” Television appearances include “Ambassadors,” “The Honourable Woman,” “Privates,” “MI High,” “The Site,” “The Passion,” “Hogfather,” “The Omid Djalili Show,” “Thank God You’re Here,” “Green Wing,” “Hyperdrive,” “Hustle,” “Blessed,” “Absolute Power,” “Rome,” “Silent But Deadly,” “Origins of Evil,” “Black Books,” “People Like Us” and “Nicholas Nickleby.” Radio credits include “The Archers,” “A Taste for Death” and “A Small Island”. He was co-writer and performer on the radio shows “Marley was Dead” and “The Newbury Arms”; other writing credits include “First We Take Colindale” and “The Darkness Will Still Be There”.

PETRU POPESCU was born in Bucharest in 1944. He was the most provocative novelist in Romania under communism. With his book Prins (‘Captive’), he single-handedly drew the most sardonic portrait of the Ceausescu era and became the mouthpiece of the country’s younger generation. After his fourth dissident novel, Burial of the Vine, which was also published in Britain, Popescu was on a collision course with Ceausescu himself. He was invited to the International Writing Program of the University of Iowa. In Romania, meanwhile, he was accused of treason and his books were being banned and destroyed. Deciding to write in English, he made his home in Los Angeles and completed Amazon Beaming, on which Complicite’s The Encounter is based. It was followed by the New York Times bestseller Almost Adam, which was translated all over the world; 20th Century Fox bought the film rights. After the fall of Ceausescu, Popescu published The Dictator’s Daughter, which sold hundreds of thousands of copies in Romania and is now being translated into English. Throughout the last three decades Popescu’s fiction has been acclaimed by John Cheever, William Styron, Elie Wiesel, John Ashbery and Deepak Chopra. He is currently at work on a new novel.

COMPLICITE (Producer). Since it was founded in 1983, Complicite has toured the world, winning over 50 major awards, becoming known as one of the UK’s most exciting and enduring theatre companies. From its early performances at the Edinburgh Fringe (where More Bigger Snacks Now became the first theatre production to win the Perrier Comedy Award) to being screened throughout the world as part of NT Live, Complicite has continued to experiment, breaking new ground with every new show. Recent productions include Ungeduld des Herzens, a co-production with the Schaubühne, Berlin, Lionboy, its first show for young people and families (seen at New York’s New Victory Theatre in 2015), and Shun-kin, co-produced with the Setagaya Public Theatre, Tokyo. Now led by McBurney and producer Judith Dimant, the Company is also known for its award-winning Creative Learning program which provides innovatory opportunities to engage with its work.

RICHARD FRANKEL, TOM VIERTEL, STEVEN BARUCH, MARC ROUTH, have produced and managed a wide range of productions over the past 30 years including (among many others) the award winning Complicite production of Mnemonic in New York City in 2001, The Producers, Hairspray, Gypsy, Young Frankenstein, Sweeney Todd, A Little Night Music, Penn & Teller, Driving Miss Daisy, Angels in America, Frankie & Johnny in the Clair de Lune, The Cocktail Hour, Love Letters, Oleanna, Damn Yankees, A Funny Thing Happened on the Way to the Forum, The Weir, Swing and the first-ever Broadway revivals of The Sound of Music and Little Shop of Horrors. They’ve also mounted many US national tours, as well as productions in London, Australia, Canada, Europe and throughout the Asian marketplace. Upcoming shows include Broadway revivals of Smokey Joe’s Café and Hairspray. Their productions have been awarded 36 Tonys, 47 Drama Desk Awards, 38 Outer Critics Awards, 4 Grammys, 8 Olivier Awards and 2 Pulitzer Prizes. They have the rare distinction of having won Tony Awards in all four “Best” categories – play, musical, revival of a play and revival of a musical.  In 2012 they opened the acclaimed Broadway-themed nightclub/cabaret Feinstein’s/54 Below.

JAMES D. STERN.  Producer, filmmaker, and CEO of Endgame Entertainment, Stern has produced over 50 shows and films.  Broadway includes the Tony winning musicals The Producers and Hairspray. Tony nominated Legally Blonde, Leap of faith, A Little Night Music, The Wedding Singer, “Lucky Guy”, Los Angeles 1992, Redwood Curtain, An Act of God and the international hit, Stomp. In film, he directed and produced the HBO special event, “Sport in America”, the criti­cally acclaimed documentary Every Little Step, So Goes the Nation as well as Michael Jordan to the Max and It’s The Rage. As producer, his films include The Discovery, Snowden, Looper, Side Effects, An Education, Proof, The Brothers Bloom, Lord of War, Hotel Rwanda, I’m Not There, Pulse: A Stomp Odyssey and Harold and Kumar Go to White Castle. Television- Last Chance U.  And Jim is glad his trip down the Amazon with Satchel and Esme was easier than the one in The Encounter.

IAN BENTLEY’s career is as diverse as they come.  While ascending as a successful internet and marketing entrepreneur, he has showcased his creative talents as a music producer, performer and songwriter.  As a graduate of the University of Florida’s prestigious theatre program, Ian returns to his roots, making his Broadway producing debut with The Encounter, one of the world’s most cutting-edge theater pieces to date. Ian is also involved in the upcoming critically acclaimed Broadway show Dear Evan Hansen, and is currently co-producing a rock/hip hop musical about the life and times of famed artist Jean-Michele Basquiat.

JIM KIERSTEAD is a two-time 2013 Tony® Award-winning producer of the Broadway, touring, Toronto, and London productions of Kinky Boots and the revival of Pippin.  He is a co-producer of the 2016 Broadway musicals Waitress and Natasha & Pierre and The Great Comet of 1812 starring Josh Groban and has been a co-producer of the Broadway productions of The Visit (Tony nominated), You Can’t Take It With You (Tony nominated), Side Show, It Shoulda Been You, and Rocky.  Past projects include Something Rotten!, The Glass Menagerie, the revival of Hair (Best Revival), American Idiot, The Addams Family, Catch Me If You Can, among others.  Off-Broadway credits include Thrill Me: The Leopold & Loeb Story, Yank!  Film credits:  Wakefield, Between Love and Goodbye, and Kiss Me, Kill Me.  Upcoming: Unexpected Joy, The Dodgers, Cover, and The Homewrecker.

BECCA DAVIES is actively involved with the theater, serving on the Board of Directors of Classic Stage Company.  She is participating in the upcoming Broadway production of Dear Evan Hansen (December 2016) and is proud to begin her commercial producing career with The Encounter.