The Critically Acclaimed Musical The Band's Arrives on Broadway 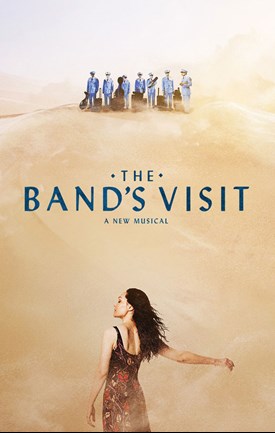 TO ARRIVE ON BROADWAY AT THE BARRYMORE THEATRE IN FALL 2017

“THIS IS A PLACE YOU WANT TO VISIT IF YOU’RE LOOKING FOR SIGNS OF NEW AND EXCITING LIFE IN THE CONTEMPORARY AMERICAN MUSICAL.”

BEST MUSICAL OF THE SEASON!

Based on the Screenplay by ERAN KOLIRIN

The Band’s Visit world premiere opened to critical acclaim at the Atlantic Theater Company on December 8, 2016, where the sold-out, limited engagement extended twice, playing its final performance on Sunday, January 8, 2017.

The musical was named BEST OF THE YEAR by The New York Times, Deadline, Newsday, New York Post, The Hollywood Reporter, Huffington Post, The Record, The Wall Street Journal, The Wrap, Time Out New York and BuzzFeed.

An Egyptian Police Band arrives in Israel to play a concert. After a mix-up at the border, they are sent to a remote village in the middle of the desert. With no bus until morning and no hotel in sight, these unlikely travelers are taken in by the locals. Under the spell of the desert sky, their lives become intertwined in the most unexpected ways. The Band’s Visit celebrates the deeply human ways music and laughter connect us all.