That Voice Inside Your Head? It May Be His 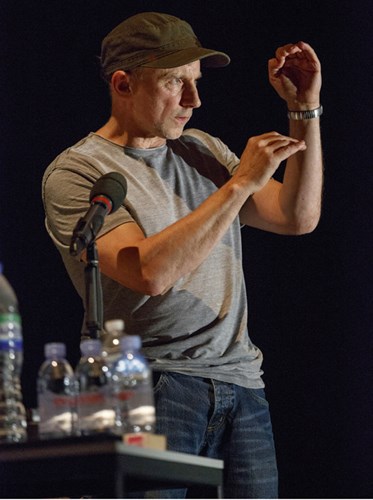 That Voice Inside Your Head? It May Be His

LONDON — Simon McBurney was chatting about his children as a technician adjusted his microphone. How many photographs he had of them on his phone — more than had ever been taken of him in his lifetime. How memories are preserved and created around images and sound. “Put on your headphones,” he urged, going on to explain how binaural technology — sound transmitted separately into each ear — works, fooling the brain into imagining a person is just inches away.

It was a hot summer day at a community center in North London, where Mr. McBurney, the director of the celebrated theater company Complicite, was camped out with the technical team that creates “The Encounter,” his one-man show, which begins previews Sept. 20 for a limited run at the John Golden Theatre on Broadway before touring to Ann Arbor, Mich., and Los Angeles.