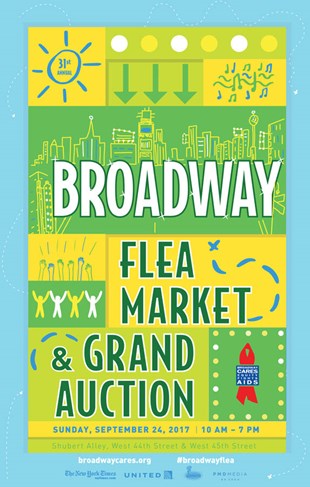 Broadway fans reveled in all things theatre as they searched for rare memorabilia, met their favorite performers and bid on one-of-a-kind experiences. The day-long celebration featured 56 tables, 74 of Broadway’s brightest stars and 212 live and silent auction items.

This year’s grand total was the first to pass the million-dollar mark, far surpassing last year’s then-record of $782,081. The 31 editions of the Broadway Flea Market & Grand Auction have collectively raised $13.6 million.
“I’m absolutely thrilled by this year’s jaw-dropping grand total,”Broadway Cares Executive Director Tom Viola said. “To raise more than a million dollars for the most vulnerable among us reminds us once again of how strong the heart and humanity are of everyone in theatre - onstage, backstage and in the audience. Every dollar raised means that men, women and children in our theatre community and across the country will see a tomorrow that includes healthy meals, lifesaving medication or emergency financial assistance. I am particularly glad the extraordinary total will enable Broadway Cares to increase support for our hurricane relief efforts in the name of the Broadway community.”

Unique finds included a Dear Evan Hansen arm cast signed by Tony Award nominee Mike Faist as Connor, earrings made from chandelier crystals from the set of Natasha, Pierre & the Great Comet of 1812, Reynolds Pamphlet props used onstage in Hamilton and a bass guitar signed by the entire cast of School of Rock - The Musical.

The day concluded in Shubert Alley with the live auction, which also shattered previous records, raising $381,450. Last year’s live auction raised $301,400. The most popular lot of the day was a coveted spot as a judge for Broadway Cares’ Gypsy of the Year and Easter Bonnet Competition, which went for a staggering $14,000.

The second-most popular auction lot was seats at a taping of the much-anticipated return of TV’s Will & Grace, including photos with the iconic cast, at $13,500. A stunning chandelier from the set of Natasha, Pierre & the Great Comet of 1812 went for $13,200, and VIP house seats to Ben Platt’s final performance in Dear Evan Hansen sold for an impressive $11,000. Two tickets to the opening night of Frozen on Broadway with invitations to its exclusive after-party raised $9,500. In all, 19 opening night packages, which included passes to the VIP celebrations after each, raised $66,000.

Fans were surprised by star appearances throughout the auction. The live auction audience “said yeah” in unison when Tony Award winner Billy Porter offered two special lots; a walk-on role in Kinky Boots and a backstage meet-and-greet with Porter and co-star Stark Sands, who both return to the Tony-winning Best Musical this week. The two lots sold for $12,200. Beloved SiriusXM host and longtime Broadway Cares friend Seth Rudetsky arrived to share his “Ultimate Seth!” auction package, including a guest appearance on his popular show, which sold for $5,100. A Bronx Tale The Musical’s Bobby Conte Thornton and Christiani Pitts introduced a walk-on role in their hit musical, which sold for $2,800.

Auction favorites Jen Cody and Michael Goddard returned to co-host the silent auction throughout the day, which raised a record-shattering $127,297. The top-selling lot was a sheet of lyrics to “Will You Still Love Me Tomorrow?,” handwritten and signed by the legendary Carole King, for $5,750.
Other popular items included a signed poster and CD from the just-closed Natasha, Pierre & the Great Comet of 1812 for $5,700 and a Dear Evan Hansen “Only Us” musical phrase, sketched and signed by Benj Pasek and Justin Paul, for $4,250.

In addition to exploring the endless gems at the tables and auctions, fans also met their favorite Broadway stars at the Autograph Table and Photo Booth, which raised $36,119.

“The number of people Broadway Cares supports across the country is astonishing,” Muñoz, who is starring in the titular role in Hamilton on Broadway, told the autograph table crowd. “I know you’re here for bargains and Broadway, but you’re also making a difference in someone’s life.”The most unique item Muñoz signed at this year’s Broadway Flea Market & Grand Auction? “Someone’s arm!”

The energetic and entertaining Ben Cameron served as host of the Autograph Table and Photo Booth. In addition to chatting with the special guests, he prompted impromptu performances, including a duet between present and past Phantoms James Barbour and Norm Lewis, and a fan’s performance of “Journey to the Past” from Anastasia, who was then surprised by show star Christy Altomare.

Broadway Cares/Equity Fights AIDS is one of the nation’s leading industry-based, nonprofit AIDS fundraising and grant-making organizations. By drawing upon the talents, resources, and generosity of the American theatre community, since 1988 BC/EFA has raised more than $285 million for essential services for people with AIDS and other critical illnesses across the United States.

Broadway Cares/Equity Fights AIDS is the major supporter of the social service programs at The Actors Fund, including the HIV/AIDS Initiative, the Phyllis Newman Women’s Health Initiative and the Samuel J. Friedman Health Center for the Performing Arts. Broadway Cares also awards annual grants to more than 450 AIDS and family service organizations in all 50 states, Puerto Rico and Washington, DC.