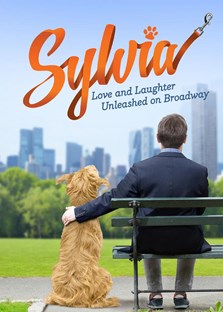 GET A "PAWSOME" DEAL FOR
BROADWAY’S SASSIEST K9, SYLVIA

SPECIAL BOX OFFICE OPENING EVENT
TO BE HELD AT THE CORT THEATRE ON
FRIDAY, AUGUST 28, 2015

In celebration of SYLVIA coming to Broadway for the first time since its MTC debut in 1995 patrons who go to the box office 10am-12pm EST will be able to purchase tickets for preview performances for only $19.95 each. Limit two per person.

In addition, the first 100 people to bring their dog to the box office that day will receive a limited edition Sylvia themed waste pick-up dispenser.

Performances will begin on Friday, October 2, 2015, and will hold its official opening night on Tuesday, October 27, 2015.

Has your pet changed your life? Have you ever wondered what she’s thinking when she stares up at you and tilts her head? Could she have the secret to understanding the world at large and your place in it? Or is she just more interested in how your shoe tastes? The world of a New York couple in mid-life is turned topsy-turvy when the husband brings home an exceptionally engaging canine running loose in Central Park in the hilarious and heartwarming comedy, SYLVIA.

From two-time Pulitzer Prize nominee A. R. Gurney (The Dining Room, Love Letters), SYLVIA takes a wonderful look into the complexities of love and commitment asks what it truly means to be devoted to your partner…and how do you choose between the love of your life and man’s best friend?