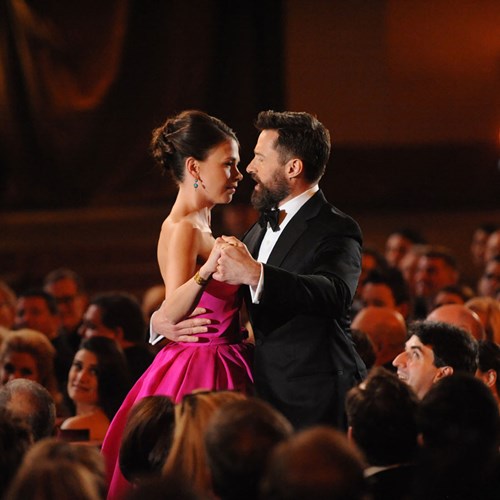 RETURNS TO BROADWAY AS

In one of the most extraordinary breakout star turns in contemporary Broadway history, Sutton Foster’s Tony-winning performance as Millie Dillmount in Thoroughly Modern Millie made her into one of the great, internationally recognized theatrical luminaries of our time. Since then – thanks to her astonishing range as vocalist, actor, and dancer – she has cemented her status as one of Broadway’s greatest-ever “triple threats,” subsequently winning a second Tony for her astonishing turn as Reno Sweeney in Anything Goes, and further racking up nomination after nomination with starring roles in The Drowsy Chaperone, Little Women, Shrek The Musical, and Violet. On television, she’s earned rave reviews and legions of new fans as star of the popular single-camera comedy/drama, “Younger.” Praising her work in Anything Goes, The New York Times chief critic Ben Brantley exclaimed, “Who needs a brass section when you’ve got Sutton Foster? Her triple mastery of words, music and moves is unmatched by any performer on Broadway.”

One of the most universally cherished treasures of the American musical theater, The Music Man was an instant smash hit when it premiered on Broadway on December 19, 1957. It went on to win five Tony Awards, including the prize for Best Musical, and ran for 1,375 performances. The original cast album held the number one position on the Billboard charts and stayed on the album charts for 245 weeks. The recording won the first-ever Grammy Award for Best Original Cast Album. In 1962, the show was adapted into a hugely successful movie, which has remained a classic for over 60 years. The Smithsonian Institution ranks The Music Man as one of the “great glories of American popular culture.

Charity (Lucille Lortel, Drama Desk, and Drama League nominations). Foster currently stars as Liza in the critically-acclaimed TV Land series, “Younger,” created by "Sex in the City's" Darren Star. Previously, Foster starred as Michelle Simms in Amy Sherman-Palladino’s ABC Family series “Bunheads,” which garnered her a Critics’ Choice Television Award nomination for Best Actress in a Comedy Series. Her television career began on “Star Search” at the age of 15; more recent credits include HBO’s comedy series “Flight of the Conchords,” USA Network’s “Royal Pains,” “Law & Order: SUV,” and “Elementary.” She has also made guest appearances on the well- known children series Disney’s “Johnny and the Sprites,” and PBS’s “Sesame Street.” As a solo artist, Foster has toured the country with her hit solo concert which featured songs from her debut album “Wish” as well as her follow up album, “An Evening

With Sutton Foster: Live at the Cafe Carlyle.” She has graced the stages of Carnegie Hall, Feinstein's, Lincoln Center’s American Songbook series, and many others. In June 2018, she released her third solo album, “Take Me to the World,” through Ghostlight Deluxe. Foster made her feature film debut in Phil Alden Robinson’s The Angriest Man in Brooklyn and appeared in James Roday’s comedy horror film Gravy.