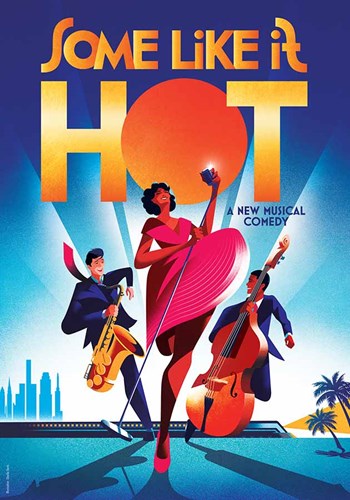 A NEW MUSICAL COMEDY BASED ON THE CLASSIC MGM FILM

(New York, NY) The Shubert Organization and Neil Meron announce today Some Like It Hot will begin performances on Broadway this fall on Tuesday, November 1 and officially open Sunday, December 11 at the Shubert Theatre (225 West 44th Street).

This brand-new Broadway musical comedy features a book by Matthew López (The Inheritance) & Amber Ruffin (“The Amber Ruffin Show”), music by Marc Shaiman, lyrics by Scott Wittman and Marc Shaiman (Hairspray) and direction and choreography by Casey Nicholaw (The Book of Mormon). The musical is based on the classic MGM Oscar-winning film Some Like It Hot which has been named the “Funniest American Movie of All Time” by the American Film Institute.

Set in Chicago when Prohibition has everyone thirsty for a little excitement, SOME LIKE IT HOT is the rollicking story of two musicians forced to flee the Windy City after witnessing a mob hit. With gangsters hot on their heels, they’re on the run as the newest members of the swingingest big band ever to cross the country. Can they hide in plain sight without completely losing themselves? Or will the mob, the truth, and maybe even love itself finally catch up to them?

J. HARRISON GHEE hopes to inspire, enlighten, and uplift someone in the journey of playing Jerry/Daphne. Hopefully you will learn to free yourself, to see yourself beyond any of your wildest dreams. Thank you friends, family, fans, and my agents at Nicolosi & Co. for your love and support. Broadway/International tour: Kinky Boots (Lola/Swing), Mrs. Doubtfire (Andre Mayem). Regional: The Color Purple (Ensemble), The Sting (Johnny Hooker). Television: “High Maintenance” (Charles), “Raising Dion” (Kwame). Industrial: Tokyo Disney Sea’sBig Band Beat, Norwegian Cruise Line. Proud graduate of The American Musical and Dramatic Academy (NY) @jharrisonghee

MARK LOTITO. Mark is a veteran of ten Broadway shows. Original productions include: The Most Happy Fella, Victor/Victoria, Betrayal, Marie Christine, The Smell Of The Kill, The Boys From Syracuse, Dinner at Eight, Fiddler On The Roof (performing the role of Tevye) and Jersey Boys, originating the role of Gyp DeCarlo. He also appeared in The Producers, having the opportunity to perform the role of Max Bialystock. He is proud to have had the honor of working three times with the late, great director Gerald Gutierrez and twice with the esteemed David Leveaux. He has worked in regional theater, on national tours, and off-Broadway for over thirty-five years. Most recently he appeared in the premiers of three new American plays, including the hit Smart Blonde, Tech Support, and Drift, which was shut down by the pandemic. Mark has worked extensively in film, television, and commercials. He has made over 100 appearances as a guest or a recurring player from soap operas to “The Sopranos” and everything in between. This past year he was a guest on “Pose”, “For Life”, and the first episode of the reboot of the original “Law & Order”.

MATTHEW LÓPEZ (Book) is an American playwright and screenwriter. His play The Inheritance, directed by Stephen Daldry, premiered at London’s Young Vic in 2018, where it was hailed as “the most important American play of the century.” It transferred to the West End later that year, and opened on Broadway in the fall of 2019. The Inheritance is the most honored American play in a generation, sweeping the “Best Play” awards in both London and New York, including the Tony Award, Olivier Award, Drama Desk Award, Evening Standard Award, London Critics Circle Award, Outer Critics Circle Honors, Drama League Award, GLAAD Media Award, WhatsOnStage Award, and the Southbank Sky Arts Award. He is the first Latine writer to win the Tony Award for Best Play. In New York, Matthew’s work has been seen off-Broadway with The Whipping Man (Manhattan Theatre Club), and The Legend of Georgia McBride (MCC Theater), productions that received Obie, Lucille Lortel, Drama Desk, and Outer Critics Circle Awards. Other works include Somewhere and Reverberation (Hartford Stage), The Sentinels (Headlong Theatre, London), and Zoey’s Perfect Wedding (Denver Center). Matthew is currently co-writing the musical adaptation of the classic film Some Like it Hot. Matthew is also working on a reimagining of the iconic 1992 Whitney Houston box office hit, The Bodyguard for Warner Bros, as well as a feature film adaptation of the novel Leading Men for Searchlight Pictures, which centers on Tennessee Williams and his longtime partner Frank Merlo. Matthew will be making his directorial feature debut with the LGBTQ+ romantic comedy Red, White & Royal Blue for Amazon Studios. In addition to directing the film, Matthew has adapted the script, based on Casey McQuiston’s bestselling novel. In October 2020, he signed an overall television development deal with Amazon studios.

AMBER RUFFIN (Book) is a writer, executive producer, and host of the WGA Award nominated series “The Amber Ruffin Show” on Peacock. She was recently nominated for an NAACP Image Award for Outstanding Host in a Reality/Reality Competition, Game Show or Variety (Series or Special). She is an Emmy and WGA Award nominee writer and performer for NBC’s “Late Night with Seth Meyers” and was the first African American female to write for a late-night network talk show in the U.S. She wrote and performed on Comedy Central’s “Detroiters” and was a regular narrator on the cabler’s “Drunk History.” Ruffin was previously a performer at Boom Chicago in Amsterdam, the iO Theater and the Second City in Chicago. In addition, she was a writer/performer for the 2018 and 2019 Golden Globe Awards and has written for the series “A Black Lady Sketch Show.” Ruffin is a New York Times bestselling author, along with her sister Lacey Lamar, of “You’ll Never Believe What Happened to Lacey: Crazy Stories of Racism,” published by Gran Central Publishing. She is currently co-writing the Broadway musical Some Like it Hot, which will begin performances in 2022. Last year, Ruffin was named to the 2021 TIME100 Next List, TIME’s list of the next 100 most influential people in the world.

MARC SHAIMAN (Music & Lyrics). Marc Shaiman is a composer/lyricist/arranger/performer working in films, television, musical theater and recordings. He has won several honors, including a Tony, an Emmy, a Grammy, plus seven Oscar nominations. Recent projects include "Rogers: The Musical" for Marvel/Disney+'s "Hawkeye", incidental music for the Broadway revival of Plaza Suite and Co-Music Producer on HOCUS POCUS 2, due for release on DISNEY+, Fall 2022. This coming September, the score for Billy Eichner's upcoming Universal romcom "Bros" which will make history as the first gay romantic comedy from a major studio. For "Mary Poppins Returns" he was nominated for two Oscars, a BAFTA, a Golden Globe and a Grammy. His other Oscar nominations have been for “Sleepless in Seattle", “Patch Adams”, “The First Wives Club”, "The American President" and “South Park-Bigger, Longer & Uncut”. Other film credits include “Beaches”, “When Harry Met Sally”, “City Slickers”, “The Addams Family”, “Sister Act”, “A Few Good Men”, "Hocus Pocus", “The Bucket List” and "Hairspray". He and Mariah Carey were nominated for a Golden Globe for their title song for the animated film "The Star". For Broadway, he and co-lyricist Scott Wittman have written Hairspray (Tony & Grammy Awards), Martin Short: Fame Becomes Me, Catch Me If You Can (Tony nom) and Charlie & The Chocolate Factory. Television credits include "Saturday Night Live" (Emmy and Golden Globe nom), “Smash” (Emmy & Golden Globe nom), The Oscars with Billy Crystal (Emmy Award), Bette Midler (final guest with Johnny Carson) and countless appearances with Neil Patrick Harris, Nathan Lane, Jennifer Hudson, Jack Black & Will Ferrell, among others. He has produced/arranged recordings and performances for Bette Midler, Harry Connick Jr., Peter Allen, Eric Clapton, Diane Keaton, Patti LuPone, Steve Martin, Barbra Streisand, Robin Williams and many more. His online opus “Prop 8 - The Musical” was a Webbie Award winner.

SCOTT WITTMAN (Lyrics). Tony, Grammy, and Olivier Award winning lyricist, director, writer, and conceiver, Scott Wittman co-wrote the lyrics for the hit musical Hairspray (Tony, Grammy, Olivier Award winner) with creative partner Marc Shaiman. Wittman also served as an executive producer on the hit film starring John Travolta. Scott was nominated for a Golden Globe, Grammy, and two Emmy Awards for the original songs on NBC’s musical drama “Smash.” While working on the show, he co-wrote songs for Jennifer Hudson, Uma Thurman, Bernadette Peters, and Liza Minnelli. Shaiman and Wittman’s original score for the Marilyn Monroe musical Bombshell was released by Sony Records. Scott & Marc’s Broadway writing credits include Martin Short: Fame Becomes Me, which Scott also directed, Catch Me If You Can (Tony nom. for Best Musical), and Charlie and the Chocolate Factory on Broadway and the West End. Scott has created and directed two Broadway shows, three studio recordings, and three sold-out Carnegie Hall concerts for Patti LuPone. He has created solo shows for Christine Ebersole and Nathan Lane, as well as writing for Bette Midler’s 2015 Divine Intervention World Tour. Off-Broadway, he conceived and directed Jukebox Jackie starring Justin Vivian Bond, Cole Escola, and Bridget Everett at La Mama., and Bridget Everett’s Rockbottom at the Public Theatre. His notorious and legendary Downtown shows are in the permanent collection of the Museum of Modern Art in New York Marc and Scott also wrote the score to Disney’s Mary Poppins Returns starring Emily Blunt, Lin Manuel Miranda, and Meryl Streep. Directed by Rob Marshall. Their song, “The Place Were Lost Things Go” was nominated for an Oscar. He recently joined the Marvel Universe with his song cowritten with Marc for “Rodgers: The Musical for “Hawkeye”. They have written a new musical version of Some Like It Hot to premiere on Broadway this fall.

THE SHUBERT ORGANIZATION (Producer) The Shubert Organization is America’s oldest professional theatre company and the largest theatre owner on Broadway. It currently owns and operates 17 Broadway and six Off-Broadway theatres and the Forrest Theatre in Philadelphia. Under the leadership of Robert E. Wankel, Chairman and CEO, The Shubert Organization continues to be a leader in the theatre industry. Since its founding in 1900, Shubert has produced hundreds of plays and musicals both in New York City and throughout the United States. Notable Broadway productions and co-productions include Ain’t Misbehavin’, Amadeus, Amour, The Band’s Visit, Cats (original and revival), Children of a Lesser God (original and revival), City of Angels, The Curious Incident of the Dog in the Night-Time, The Dance of Death (Ian McKellen & Helen Mirren), Dirty Blonde, Dreamgirls, The Elephant Man (revival), A Few Good Men, The Gin Game (original and revival), The Grapes of Wrath, Hedwig and the Angry Inch, The Heidi Chronicles, Hugh Jackman – Back on Broadway, Jerome Robbins' Broadway, The Life and Adventures of Nicholas Nickleby, Once, Passion, The Real Thing (original), School of Rock, Spamalot, Sunday in the Park with George and To Kill A Mockingbird. The Shubert Organization is currently represented on Broadway by American Buffalo, Come From Away, Company, Dear Evan Hansen, Hangmen, The Little Prince, Macbeth, The Minutes, Mr. Saturday Night and A Strange Loop.