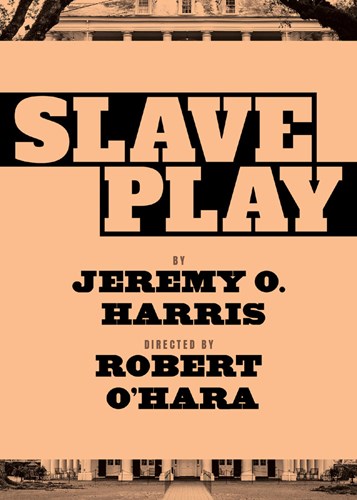 When it premiered last fall, Slave Play immediately became the most talked about play of the year, garnered intense critical acclaim, stunned audiences with its unflinching examination of race and sex, and hailed Harris as “one of the most promising playwrights of his generation” (Chloe Schama, Vogue).

With the Broadway premiere of this “explosive, raw, and very funny piece of theater about race, sex, and power” (Tim Teeman, The Daily Beast), Harris becomes the sixth black writer to have a new play on Broadway in the last decade.

Prepare for “the single most daring thing I’ve seen in theater in a long time” (Wesley Morris, The New York Times).

Harris said, “During my very short time being a professional writer, the world I thought I’d inhabit was one at odds with a commercial theatrical landscape; so to see that this play, Slave Play, that interrogates the traumas Americans have inherited from the legacy of chattel slavery and colonization has a place in the canon of work that has made its way to Broadway is both exhilarating and humbling. It also articulates that the leaps the community made in the past Broadway season might not have been a fad but the beginning of a new moment for the theater to once again attempt to represent discursive American theatrical expression not situated solely within the imaginaries of cis white men, but the imaginaries of all Americans.”

O’Hara said, “I’m thrilled as a black queer artist to be collaborating with another black queer artist on what will be both of our Broadway debuts. I think the idea that I can say that openly and proudly is rather profound given the history of our country and of the American theater, but more specifically Broadway which has had and continues to have a general lack of diversity and diverse stories. I feel that Jeremy is joined today by a whole host of exciting young artists who are telling stories outside the main stem which can now hopefully be presented on the main stem. As the margin slowly becomes the center, I believe a cavalcade of voices one would never expect to be heard on Broadway can be and should be demanded. Slave Play is a complex, challenging and exhilarating piece of work and I look forward to presenting it this fall on Broadway.”

The published edition of Slave Play is currently available in the July/August issue of American Theatre Magazine.

The Old South lives on at the MacGregor Plantation — in the breeze, in the cotton fields...and in the crack of the whip. It’s an antebellum fever-dream, where fear and desire entwine in the looming shadow of the Master’s House. Jim trembles as

Kaneisha handles melons in the cottage, Alana perspires in time with the plucking of Phillip’s fiddle in the boudoir, while Dustin cowers at the heel of Gary’s big, black boot in the barn. Nothing is as it seems, and yet everything is as it seems.

Casting for the Broadway premiere of Slave Play will be announced in the coming weeks.

Slave Play is the recipient of the Rosa Parks Playwriting Award, the Lorraine Hansberry Playwriting Award, The Lotos Foundation Prize in the Arts and Sciences, and the 2018 Paula Vogel Award. The play was nominated for the Outer Critics Circle’s John Gassner Playwrighting Award and the Lucille Lortel Award for Outstanding Play.

SEAVIEW PRODUCTIONS aims to amplify new voices with a focus on developing stories not traditionally told in the Broadway space. This Tony and Olivier Award- winning production company is led by Greg Nobile and Jana Shea, along with Managing Director Carly Callahan and Associate Producer Julia Dunetz. Seaview is committed to redefining on-stage storytelling through strategic innovation in creative development, audience experience, consumer engagement, and investment management. Select Seaview producing credits include the Lortel Award-winning revival of Sweeney Todd at the Barrow Street Theatre, the Tony Award-winning musical A Gentleman’s Guide to Love and Murder, the Olivier Award-winning revival of Gypsy and Showboat on London’s West End, Hundred Days, Invisible Thread and OSCAR at The Crown Off-Broadway. Upcoming Broadway productions include Sea Wall/A Life and Lempicka. Seaview also produced the Peabody Award-winning documentary India’s Daughter and Gypsy: Live from the Savoy Theatre in collaboration with the BBC. www.SeaviewProds.com

TROY CARTER Troy Carter is the founder and CEO of Q&A, a new music & technology company focused on building an integrated solution for artists via distribution, management, label services, and data analytics with a highly collaborative artist-driven approach. Formerly, Troy was the founder and CEO of Atom Factory and co-founder and Managing Partner of Cross Culture Ventures. He most recently served at Spotify as its Global Head of Creator Services, overseeing the company’s relationships with artists, producers, songwriters and record companies. In 2017, Troy was also named Entertainment Advisor to the Estate of Prince Rogers Nelson. Troy rose to prominence In the music industry, nurturing the career of hip-hip sensation Eve before transforming Lady Gaga into a global pop phenomenon through the nascent innovation of social media. Since then he's managed the careers of John Legend, Lindsey Stirling, Meghan Trainor and Charlie Puth. His foray into the tech world resulted in the formation of Atom Factory's angel fund and VC fund Cross Culture Ventures. Early-stage investments include Uber, Lyft, Dropbox, Spotify, Warby Parker, theSkimm, MOAT, Gimlet Media, Thrive Market, and ATTN. Troy also serves as a member of the Board of Trustees for The Aspen Institute and the Los Angeles County Museum of Art, as well as a board member for organizations including The Grammy Foundation, United Nations Global Entrepreneurs Council and the James Madison Council at The Library of Congress. Carter spent time as a guest shark for Season 7 of ABC's hit primetime show Shark Tank, and has been globally recognized on industry lists for Fast Company's Most Creative People, Billboard's Power 100, as well as The Hollywood Reporter's Silicon Beach Power List.

LEVEL FORWARD (Producer) develops, produces, and finances high-quality entertainment with Oscar, Emmy, and Tony-winning producers, working to extend the opportunity and influence of creative excellence, advance economic transformation, and support new voices. The company takes great responsibility for its work, using film, television, digital, and live media to advance equity and shareholder return through story-driven, impact-minded properties. The company’s Tony-Award winning Oklahoma! and Tony-Nominated What the Constitution Means Mean to Me can be seen now on Broadway. @levelforward