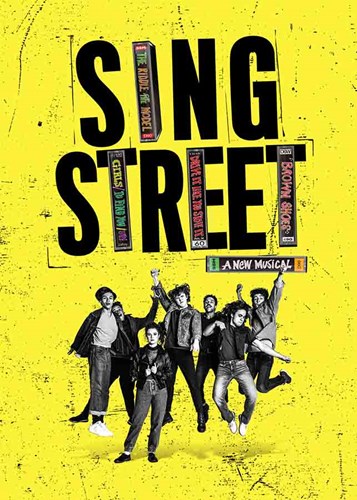 TO TRANSFER DIRECTLY TO BROADWAY WITH MEMBERS OF THE NYTW CAST PERFORMANCES BEGIN THURSDAY, MARCH 26, 2020

"A boy press 'PLAY' and the WORLD GOES AWAY.

“SPIRITED and WINNING.” – The Hollywood Reporter

BASED ON THE MOTION PICTURE WRITTEN AND DIRECTED BY JOHN CARNEY

(January 8, 2020 – New York, New York) New York Theatre Workshop’s critically-acclaimed World Premiere of the new musical SING STREET, currently playing a sold-out engagement at NYTW (Artistic Director James C. Nicola and Managing Director Jeremy Blocker), will transfer directly to Broadway starring members of the New York Theatre Workshop cast, beginning performances at the Lyceum Theatre (149 West 45th Street) on Thursday, March 26, 2020, and opening Sunday April 19, 2020. Dublin, 192. Everyone is out of work. Thousands are seekinh bluer skies across the Irish Sea. Sixteen-year-old Conor and his choolmates turn to music to escape troubles at home and impress a mysterious girl. With a score that embraces the new wave sounds of the era, SING STREET celebrates the thrill of first love and the power of music.

MAX BARTOS (Darren) is a 16-year-old high school junior from Lancaster, PA, making his Broadway debut! Max is a singer/musician/songwriter who plays acoustic and electric guitar and piano. He founded his own production company, Bartos Theatrical Group, LLC, and recently debuted an all-teen production of EDGES, in which he performed and also directed. Max has performed in several NYC workshops, including those for Sing Street, Other World, and Against the Wall and has also performed at many theaters in his hometown of Lancaster, PA. Max was recently crowned “The Future of Broadway” at a Broadway Artists Connection cabaret event. Films include: Uncut Gems, The Lottery, and Forget-Me-Not. Max is represented by Nancy Carson of Carson/Adler Agency and has trained with Drew Gasparini as well as the many instructors at Stagedoor Manor. Max is a proud member of AEA and SAG- AFTRA. maxbartos.com. Twitter: @maxbartos. Instagram: @drama_king37.

BRENDAN C. CALLAHAN (Gary) is happy to be making his Broadway debut in SING STREET! Hailing from Boston, Brendan performed this past summer as a member of Faneuil Hall Marketplace’s street performer program. New England theatre credits include She Loves Me (Greater Boston Stage Company), A Christmas Carol (North Shore Music Theatre), The Who’s Tommy (Seacoast Repertory Theatre), Spring Awakening (Seacoast Repertory Theatre). Brendan was nominated for an IRNE Award in 2018 for his performance as Arpad in She Loves Me. When not performing, Brendan has worked as a graphic designer and as a music director. BrendanCCallahan.com. @BrendanCCallahan.

MARTIN MORAN’s (Brother Baxter) latest play, Theo, premiered this year at Two River Theater. His play, All The Rage, received a 2013 Lucille Lortel Award and Outer Critics Circle Award nomination for Outstanding Off-Broadway Solo Show. He received a 2004 Obie and two Drama Desk nominations for his solo play, The Tricky Part, based upon his memoir which won the 2005 Lambda Non-Fiction Prize and B&N Discover Award. Broadway and Off-Broadway performances include roles in: Spamalot, Cabaret, Titanic, Wicked, Bells Are Ringing, How To Succeed…, Big River, Floyd Collins (Playwrights Horizons), A Man of No Importance (Lincoln Center Theater), 3 Kinds of Exile and Cider House Rules at The Atlantic Theater Company and Mans A Man at Classic Stage Company. Film and television appearances include: “The Newsroom,” “The Big C,” “Z-Nation,” “Possible Side Effects,” Private Parts; various “Law & Order” shows, “Dellaventura” and “Mary and Rhoda.” Moran’s writing has appeared in Ploughshares, the Pushcart Prize anthology and The New York Times. He was awarded a MacDowell Colony Fellowship and a New York Foundation for the Arts grant for Creative Non-fiction. His second memoir, All The Rage, was released in 2016 by Beacon Press.

GIAN PEREZ (Kevin) is making his Broadway debut. Currently, Gian is a BFA acting student at the University of Michigan (Class of 2020). His previous theatre credits include Usnavi in In the Heights, Oliver in Trevor, and Feste in Twelfth Night. Apart from playing Feste, Gian also wrote the music for Twelfth Night, which he released in an EP titled That Strain Again: Songs from Twelfth Night, or What You Will. He has released two solo records, Baby Blue (2017) and Revelations (2018), which he wrote, arranged, and performed. Other music projects include the rock band, Office Hours, most noted for their single, “Sunday.” They’ve also released an EP titled Late Night Korean BBQ. Gian’s music is available on all streaming platforms (Spotify, Apple Music, Tidal, etc.) Instagram: @giansound

SAM POON (Eamon) is thrilled to have made his NYTW debut in SING STREET with such an outstanding cast, crew, and creative team! Over the years Sam has played principal roles in a range of shows on stage and on-camera, including MacBeth and The King and I on Broadway. Off- Broadway: Runaways. National Tours: Les Misérables, Billy Elliot. Regional: Camelot, Miss Saigon, Oliver, The Jungle Book, Soldier Songs. Off-Off Broadway: The Secret Garden. Select Film & TV: Boychoir, Crazy Famous, Portraits in Dramatic Time, Generation Wrecks, "NBC’s New Year's Eve with Carson Daly," "The Late Show with David Letterman," and "The Today Show." With Sing Street, Sam is able to merge his love for the stage as a musical theater performer with his love for being a musician. Recently, under the name Spoonuel, Sam released an EP entitled ORANGE-ADE. In a review of ORANGE-ADE, Rebecca Cullen states, "Spoonuel lays out a brilliantly dreamlike set of vibes on this latest release. The project Orange-ade is incredibly smooth, delicate in nature but cool and intentional ..." You can learn more about Sam the musician and actor at spoonuel.com and SamPoonOnline.com.

SKYLER VOLPE (Anne) is thrilled to make her Broadway debut! Most recently, Skyler played Suzanne Prevôt and the acoustic guitar in the World Premiere production of The Hello Girls with Prospect Theater Company. She also played and sang on the original cast album and on the Millennium Stage at the Kennedy Center. Favorite credits include Anita in West Side Story (Barrington Stage, Outer Critic’s Circle Award), Edwina/Mariana/Sudabey in Passing Strange (Playhouse on Park), and Mimi Marquez in the inaugural cast of the 20th Anniversary Tour of RENT. Instagram: @svulpes. skylervolpe.com

AMY WARREN (Penny). Select roles: Joyce Gabriel in The Gabriel’s: Election Year in the Life of One Family at the Public Theater and subsequent international tour; Dorothy Parker, Mrs. Harris & others in Act One at Lincoln Center; Karen Weston in August: Osage County on Broadway and on tour; Daisy in Adding Machine: A Musical (Drama Desk, Outer Critics Circle, Lortel Nomination Best Featured Actress in a Musical); Mrs. Schlemiel in the musical Schlemiel the First (TFANA); Melancholy Play: A Chamber Piece by Sarah Ruhl. Regional: numerous productions at Steppenwolf including The Weir; Rabbit Hole (and others) at The Goodman. Amy fronted the Chicago pop rock band Tallulah, sings in many Aluminum Group releases and composed and performed the music for the play PULP. She also wrote 4 songs for Theater Ooblecks’ Baudelaire in a Box.

ILAN ESKENAZI (Off-Stage Cover) is thrilled to make his Broadway debut as a part of the SING STREET company. On television, he recurred on the Marvel’s “Iron Fist” Netflix series. A graduate of Fiorello H. LaGuardia High School of Music & Art and Performing Arts, Ilan’s favorite role was Herbie in Gypsy. Eskenazi is currently working towards his BFA in Pace University’s Acting for Film Program.