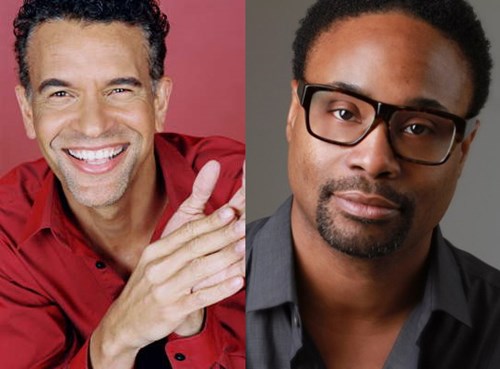 Audra McDonald, Brian Stokes Mitchell, Billy Porter, Brandon Victor Dixon and Joshua Henry to Star in 'Shuffle Along Or The Making of the Musical Sensation of 1921 and All That Followed'

Next spring, Audra McDonald, Brian Stokes Mitchell, Billy Porter, Brandon Victor Dixon, and Joshua Henry will star in SHUFFLE ALONG Or The Making of the Musical Sensation of 1921 and All That Followed, a striking new production that presents both the 1921 musical itself, and additionally details the events that catalyzed the songwriting team of Noble Sissle and Eubie Blake, and librettists F.E. Miller and Aubrey Lyles to create this ground-breaking work. SHUFFLE ALONG will have a new book by George C. Wolfe, will be choreographed by Savion Glover, and directed by Mr. Wolfe. SHUFFLE ALONG marks the first time that the writer/director and choreographer will have worked together since their 1996 hit Bring in ‘da Noise, Bring in ‘da Funk. Previews will begin Monday, March 14, 2016. Opening night is Thursday, April 21, 2016 at the Music Box Theatre (239 West 45th Street).

In May 1921, the new musical Shuffle Along became the unlikeliest of hits, significantly altering the face of the Broadway musical as well as that of New York City. By the time Shuffle Along stumbled into town after a back-breaking pre-Broadway tour, it was deeply in debt and set to open at a remote Broadway house on West 63rd Street. In a season full of spectacles, such as Sally — a Ziegfeld musical — and another edition of George White’s Scandals, Shuffle Along’s failure was almost a foregone conclusion. New York City was still in the throes of the Depression of 1920. And despite being celebrated vaudeville performers, Miller and Lyles and Sissle and Blake had never performed on Broadway, much less written a musical. But with an infectious jazz score and exuberant dancing, Shuffle Along ignited not just Broadway but all of New York City. George Gershwin, Fanny Brice, Al Jolson, Langston Hughes, and famed critic George Jean Nathan were among the many fans who repeatedly flocked to West 63rd Street to see a cast which — during its run of 504 performances — featured such incipient luminaries as Josephine Baker, Paul Robeson, Florence Mills, Fredi Washington, and Adelaide Hall. Because of Shuffle Along, Uptown and Downtown met and became one.

The 2016 SHUFFLE ALONG brings the original show back to glorious life, while simultaneously telling the remarkable backstage story of both its historic creation and how it changed the world it left behind.

SHUFFLE ALONG Or The Making of the Musical Sensation of 1921 and All That Followed will have music supervision, arrangements, and orchestrations by Daryl Waters. The production will feature scenic design by Santo Loquasto, costume design by Ann Roth, sound design by Scott Lehrer, and lighting design by Jules Fisher and Peggy Eisenhauer. Shelton Becton will be the Musical Director.