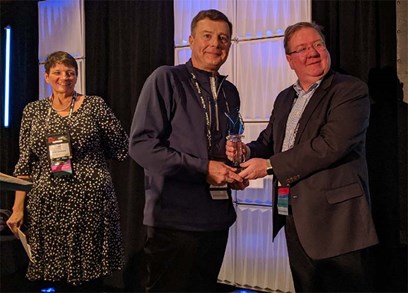 This award is given annually to a member who has made a major contribution to the ticketing industry by helping set standards of excellence in all aspects of ticket management, and who has been actively involved in the continuing development and organization of INTIX.

“We are delighted to see Vince honoured with this award,” Palmer says. “In addition to a long and successful career with Shubert Ticketing, he is a longstanding supporter of INTIX who has worked diligently to serve in every capacity: as an enduring partner, sponsor and exhibitor, and as co-chair, panelist and presenter. In the early days of BOMI, INTIX’s predecessor, he served on the Executive Committee, which set the foundation for how our organization would be governed and operated. Vince has also helped educate our ticketing leaders of tomorrow by mentoring and teaching others as they rise through the ranks.”

Rieger has played a key role in major milestones for Shubert over the years, including the computerization of the Broadway ticket offices, establishing Telecharge in 1983 and acquiring Ticketron in 1991. Today, he continues to play a major role in the ongoing development of software and oversight to the implementation of new technologies.