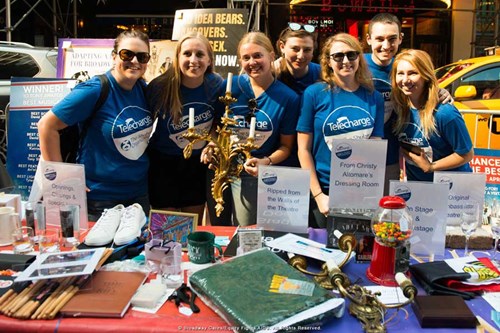 The Shubert/Telecharge table ranked in the top ten of 56 fund-raising tables at this year's event.

The table featured a wide range of theatrical memorabilia including a gumball machine from the dressing room of Anastasia star Christy Altomare, a giant photo banner of Frankie and Johnny star Audra McDonald's face from the facade of the Broadhurst Theatre, plus hundreds of window cards, programs, opening night gifts and behind-the-scenes swag.

The day concluded in Shubert Alley with the live Grand Auction, which included donations from The Shubert Organization of a crystal chandelier from the Gerald Schoenfeld Theatre, in addition to a "VIP Experience Package" offering house seats and a tour of The Shubert Archive.

The money raised at the annual Broadway Flea Market will support programs providing lifesaving medication, health care, nutritious meals, counseling, emergency financial assistance and social services to those most in need in all 50 states, Puerto Rico and Washington, D.C.