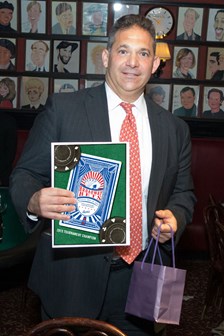 Theater fans, celebrities and industry insiders grabbed their seats at poker tables on Monday, May 18, 2015, to raise $137,200 for Broadway Cares/Equity Fights AIDS at the inaugural edition of Broadway Bets.

The rollicking evening started with 16 classic Texas Hold ‘em poker tables filling the two floors of the iconic restaurant. Using skill, strategy and a bit of luck, 10 players bested more than 120 other competitors to win their way to the championship table.

One by one they dropped until there was only two. The final head-to-head was a classic showdown of management versus union, as Bill Paness, controller for The Shubert Organization, faced off against IATSE Local 311 member Eric Castaldo. Friends, poker fans and busted out players hovered around the table, cheering and cajoling the final players. In this congenial battle, Paness ultimately bested Castaldo to become the first Broadway Bets champion and winner of a VIP weekend at Foxwoods Resort Casino, the official tournament host.

“Broadway Cares presents a number of ‘capital B’ events each spring and summer with Backwards, Bonnet, Bares and Barks,” said BC/EFA Executive Director Tom Viola. “We are thrilled to welcome a
fifth: Bets! Broadway Bets fits like a glove in the midst of them all, bringing a little Texas Hold ’em fervor to that eagerly anticipated annual fundraising mix of fun, excitement and community.”

For those not ready to go “all in,” Broadway Bets guest passes offered an opportunity to observe the poker table action and play for prizes in other casino games, including roulette, blackjack and craps.

Broadway Cares/Equity Fights AIDS is one of the nation’s leading industry-based, nonprofit AIDS fundraising and grant-making organizations. By drawing upon the talents, resources and generosity of the American theatre community, since 1988 BC/EFA has raised more than $250 million for essential services for people with AIDS and other critical illnesses across the United States.

Broadway Cares is the major supporter of the social service programs at The Actors Fund, including the HIV/AIDS Initiative, the Phyllis Newman Women’s Health Initiative and the Al Hirschfeld Free
Health Clinic, and awards annual grants to more than 450 AIDS and family service organizations nationwide and .