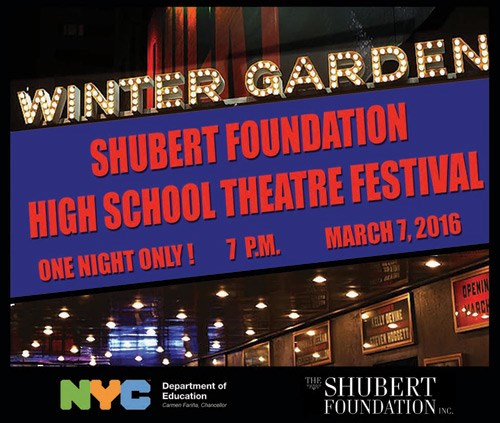 Star of“School of Rock – The Musical”

STEP INTO THE BROADWAY SPOTLIGHT

Hosting the event will be Alex Brightman, the acclaimed star of the new Broadway hit, School of Rock – the Musical. He will be introduced by Shubert Foundation President Michael I. Sovern. Attending the event will be Philip J. Smith, Chairman of the Shubert Organization, Robert E. Wankel, President of the Shubert Organization, and leading members of New York’s professional theatre community. Students from across the 20-plus schools that participated in the process will be in attendance to support their fellow students, along with family members and arts educators.

The Festival is a celebration featuring five outstanding high school student productions from the 2015-2016 school year. The productions were selected from over 20 across the City by a panel of theatre professionals, arts educators, and representatives of the Public Theater, the Dramatists Guild Fund, and the Theatre Development Fund, among others. Students from the following schools will present excerpted scenes and musical numbers from:

BEAUTY AND THE BEAST

A RAISIN IN THE SUN

“Studying theatre teaches students the importance of revising, editing, and rehearsing in the pursuit of mastery,” said New York City Schools Chancellor Carmen Fariña. “These are critical skills both in and outside of the classroom, and we’ve expanded access to theatre and arts education that inspires students and prepares them for college and careers. In particular, we are committed to strengthening our students’ connections to the City’s rich cultural resources and developing meaningful arts partnerships with organizations like Shubert.”

“We are thrilled to present the second annual Shubert Foundation High School Theatre Festival,” said Philip J. Smith, Chairman of the Shubert Organization. “It’s a perfect expression of what we’re trying to accomplish by supporting arts education. I look forward to watching these New York City stars of tomorrow light up the stage at the Winter Garden.”

The High School Theatre Festival aims to showcase the ongoing and excellent theatre work currently taking place in NYC public high schools, as well as highlight the positive effects of theatre study on skills for the stage and in life: collaboration, artistry, discipline, focus, literacy, student voice, self-awareness, presence, active listening and empathy.  The evening focuses on the impact a full theatre program can have on students and school communities, and enables students to see theatre and the arts as a potential career path.

“Beyond the inspiring student artistic excellence showcased on a Broadway stage, the Festival highlights the broader impact of theatre education on student skills for the stage, for school and beyond,” said Peter Avery, Director of Theater for the NYC Department of Education and the Festival’s producer.

The Shubert Foundation, Inc. is the largest institutional funder of theatre education programs throughout NYC public schools and the nation’s largest private foundation dedicated to unrestricted funding of not-for-profit theatres, with a secondary focus on dance. In 2015, the Foundation provided more than $24 million to 365 theatre companies and 77 dance companies across the country.  The Shubert Foundation, Inc. was established in 1945 by the legendary team of brothers, Lee and J.J. Shubert, producers of more than 520 plays, musicals and revues, as well as owners and operators of a nationwide network of legitimate theatres. For more information, visit www.shubertfoundation.org