Sean Hayes Stars in Broadway's AN ACT OF GOD 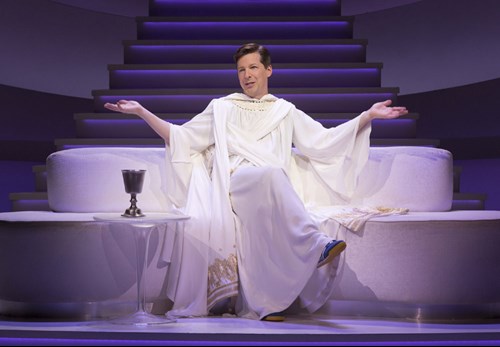 Hit Broadway Comedy
An Act of God Begins Performances May 2016

“SEAN HAYES is the Funniest Guy in Heaven (and Earth).” ­- Los Angeles Times

“Remarkable! You have to see it for yourselves." – James Lipton

God is currently in performances in San Francisco at the Golden Gate Theatre. When reached for comment (which rarely happens), He said, “I can’t wait to return to the Great White Way this summer, embodied by the brilliant Sean Hayes. I’m particularly excited to spend 14-weeks at the Booth Theater, because when you think about good things happening in a theater, the name you think of is ‘Booth’!"

Los Angeles critics responded to the heavenly successful run in the City of Angels at the Ahmanson Theatre by calling Sean Hayes “DIVINE” and proclaimed the production “funny as hell,” “faithful and nonbelievers alike find pleasure and insight and you’ll laugh your ash off” and “it’s a revelation, though must see it!”

The Agreement for God to use Sean Hayes’ body was brokered through Actor’s Equity Association.
The casting of God’s angels will be announced soon.

An Act of God is based on the critically acclaimed book written by God and transcribed by David Javerbaum. Javerbaum is a 13-time Emmy Award® winner for his work as a head writer and executive producer for “The Daily Show with Jon Stewart.”

The play premiered on Broadway on May 7, 2015 and ran in an acclaimed, limited run through August 2, 2015 starring God in the body of Jim Parsons. It was the first Broadway production of the 2015-2016 season to recoup its initial investment.

The King of the Universe is back to tackle His greatest challenge yet: a second summer in New York. God takes the form of Emmy Award winner Sean Hayes in An Act of God, a 90-minute comedy where the Almighty and His devoted Angels answer some of the deepest questions that have plagued mankind since Creation. He’s returned to set the record straight to a whole new crop of believers … and He’s not holding back!

The show will be entirely subsidized by angels.

The playing schedule for An Act of God is available at the official website: www.AnActOfGod.com

SEAN HAYES, who received critical acclaim for his roles in theater, television and film, quickly gained fame as the sarcastic and hilarious, Jack McFarland, on NBC’s “Will & Grace.” In 2011, Hayes made his Broadway debut in the wildly successful Promises, Promises alongside Kristin Chenoweth. He received a leading-actor Tony nomination for his performance in addition to a Grammy nomination for Soundtrack Recording. That same year, he also served as the host of the Tony Awards and was later awarded with an Emmy for his work as host. Previously, Hayes was seen on stage in New York in the New York City Center production of Damn Yankees with Jane Krakowski and Cheyenne Jackson. In addition to working successfully and simultaneously in theater, film and television, Hayes has also added producing to his repertoire. In 2003, Hayes and producing partner, Todd Milliner formed Hazy Mills Productions. Their first production, “Situation: Comedy”, a documentary television show in search of the next great sitcom, premiered on Bravo in the summer of 2005 and garnered wide critical praise. Hazy Mills recently produced the sixth and final season of “Hot in Cleveland,” starring Betty White. Its premiere season generated the highest ratings in the history of TV Land. Additionally, the show received a nomination for the 2011 Screen Actors Guild Award for “Outstanding Performance by an Ensemble in a Comedy Series” and Betty White won the 2011 and 2012 Screen Actors Guild Awards for “Outstanding Performance by a Female Actor in a Comedy Series.” Hazy Mills also produces the NBC series “Grimm,” a dark yet fantastical cop drama that takes place in a world where Grimm’s Fairy Tale inspired characters exist. They also produce the Emmy-award winning “Hollywood Game Night,” as well as the sitcom, “The Soul Man,” starring Cedric the Entertainer. Hayes became a household name in 1998, when he landed the coveted role of Jack on “Will & Grace.” His portrayal garnered him an Emmy Award (along with six nominations), four Screen Actors Guild Awards, and received seven Golden Globe nominations. Hayes was also and “Martin & Lewis” a film that starred Sean as Jerry Lewis for which he earned a Screen Actors Guild Award nomination. Previous film credits include “The Bucket List” opposite Jack Nicholson and Morgan Freeman, “Billy's Hollywood Screen Kiss,” “Pieces of April,” “The Cat in the Hat,” and “The Three Stooges” directed by the Farrelly brothers. A “Three Stooges” sequel is anticipated to be in production in 2016.