SCHOOL OF ROCK to End Its Run on Broadway January 20 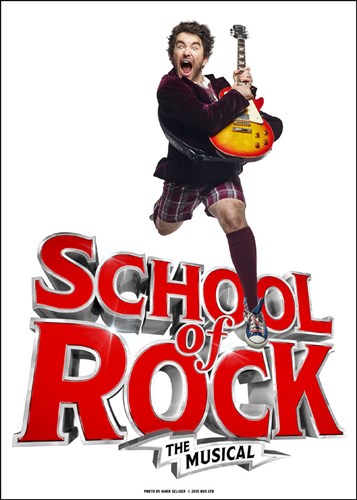 New York, NY(July 17, 2018) - Andrew Lloyd Webber's smash hit School of Rock - The Musical, announced today that the show will play its final Broadway performance at the Winter Garden Theatre on January 20, 2019. By that date, the show will have run for more than 3 years, playing 1,307 performances and 31 previews. The production recouped its entire Broadway investment in May of 2017.

School of Rock - The Musical has become a global phenomenon and will continue to bring its infectious rock and roll spirit to audiences all over the world. The show currently has productions running on London's West End and across the United States on its National Tour - which launched on September 30, 2017 in Rochester, NY. Beginning on October 31, 2018, School of Rock will begin its extended sit-down production at Her Majesty's Theatre in Melbourne, Australia before touring Asia.

On top of that, in an unprecedented move, Andrew Lloyd Webber teamed up with R&H Theatricals, a division of Rodgers & Hammerstein, and granted youth performance groups and schools the rights to perform the production before it even opened on Broadway. As of today, about 1,000 schools have performed School of Rock around the world.

School of Rock - The Musical is based on the smash hit 2003 film of the same, featuring music from the movie, as well as an original score by Andrew Lloyd Webber, lyrics by Glenn Slater, a book by Julian Fellowes and direction by Laurence Connor. The show began previews on November 9, 2015 and opened to rave reviews on Sunday, December 6, 2015 at Broadway's Winter Garden Theatre. Ben Brantley named it a New York Times' 'Critics' Pick'. Entertainment Weekly raved that School of Rock "is an inspiring jolt of energy and mad skillz!" And, in his four-star Critics' Pick review, Time Out's David Cote proclaimed, "School's IN - forever!" School of Rock - The Musicalwas nominated for four 2016 Tony Awards, including Best Musical, Best Score (Lloyd Webber and Slater), Best Book (Fellowes), and Best Leading Actor in a Musical (Alex Brightman).

The aforementioned West End production also garnered rave reviews when it opened on November 14, 2016, going on to break all house records at the Gillian Lynne Theatre (previously held by War Horse). The Daily Telegraph called the musical "the most enjoyable two hours money can buy," and the Daily Mirror considers it "a triumph for Andrew Lloyd Webber as the king of hit musicals." School of Rock was nominated for three 2017 Olivier Awards, including Best New Musical, Best Actor in a Musical (David Fynn) and Outstanding Achievement in Music, which it won.

Based on the hit film,School of Rock - The Musical is a hilarious new musical that follows Dewey Finn, a failed, wannabe rock star who decides to earn a few extra bucks by posing as a substitute teacher at a prestigious prep school. There he turns a class of straight-A students into a guitar-shredding, bass-slapping, mind-blowing rock band. While teaching these pint-sized prodigies what it means to truly rock, Dewey falls for the school's beautiful but uptight headmistress, helping her rediscover the wild child within.

The show has featured an incredible lineup of young musicians since it began, and has even influenced a new generation of young rockers to pick up instruments. Night after night, the kids' band has been wowing audiences with their technical skills and rock star prowess.

During his time in School of Rock, Niederauer played a cover of Jimi Hendrix's "Voodoo Child" with the other members of the kids' band. To check out the video, click here . He has also paid tribute to Hendrix's legendary rendition of The Star Spangled Banner, played at venues all over the country, including Madison Square Garden, and recently opened the live broadcast of "Jesus Christ Superstar Live in Concert" on NBC on April 1, 2018.

It was recently announced that the show will welcome a new class of eight young rockers to Horace Green beginning on Monday, July 30, 2018. The new class includes Layla Capers as "Tomika", Duke Cutler as a Swing, Darrow Golub as "James", Matthew Jost as "Zack" the guitarist, Jordan Cole as "Lawrence" the keyboardist, Hudson Loverro as "Billy", Nirvaan Pal as "Mason" and Theodora Silverman as a Swing.

In addition, the producers also announced that Katherine McLaughlin will make her Broadway debut as "Principal Rosalie Mullins" beginning on Monday, July 30, 2018.