'School of Rock' Premieres at Winter Garden this November 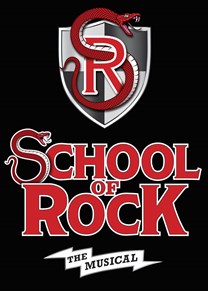 TO HAVE WORLD PREMIERE ON BROADWAY

The Really Useful Group, Warner Music Group & Access Industries, The Shubert Organization, and The Nederlander Organization announced that School of Rock—The Musical, will have its World Premiere on Broadway. Previews will begin on Monday, November 2, 2015 at the Winter Garden Theatre, with an opening set for Sunday, December 6. Based on the smash hit 2003 film of the same title, School of Rock will feature music from the movie, as well as new music written by Andrew Lloyd Webber and lyricist Glenn Slater, with a book by Julian Fellowes. School of Rock—The Musical will be directed by Laurence Connor (currently represented on Broadway by Les Miserables).

Produced by Paramount Pictures, the 2003 film was directed by Richard Linklater and starred Jack Black in a career-defining performance. The film received universal critical acclaim and was hailed by The New York Times as an “irresistible comic postscript to the rock revolution.” The film went on to gross more than $130 million worldwide.

In School of Rock—The Musical, down-on-his-luck wannabe rock star Dewey Finn poses as a substitute teacher at a prestigious prep school to make ends meet. When he discovers his students’ musical talents, he enlists his fifth-graders to form a rock group and conquer the Battle of the Bands.

Three-time Grammy Award-winner Rob Cavallo also joins the creative team. Cavallo is one of the top- selling record producers in the world, has been involved in albums that have sold more than 150 million units and has worked with Green Day, My Chemical Romance, Paramore, Goo Goo Dolls, Phil Collins, Cary Clark Jr., among others.

Cavallo said "School of Rock is a wonderful film, a rock and roll story that transcends the genre with passion and heart. To be able to creatively collaborate with Andrew Lloyd Webber, Glenn Slater, Julian Fellowes and the rest of the team is a once-in-a-lifetime opportunity, and I can't wait to see School of Rock take on a whole new life."

Co-producers The Shubert Organization and The Nederlander Organization issued a joint statement: “This partnership is an extension of a longstanding and productive relationship between our two organizations, and it gives us the exciting opportunity to work with Andrew again. We are thrilled to be on the producing team with The Really Useful Group and Warner Music Group to bring School of Rock – The Musical to Broadway.”

“I am excited to be working on bringing Jack Black and Mike White's iconic movie to the stage,” said Andrew Lloyd Webber. “It is a joy for me to return to my Jesus Christ Superstar roots – when Deep Purple's Ian Gillan was recording Jesus for Tim Rice and me at London's Olympic Studios, Led Zeppelin was recording next door and a glimpse of a Stone or two was routine! School Of Rock is hugely about how music can empower kids. Tim Rice and my first performed piece, Joseph and the Amazing Technicolor Dreamcoat, was written for a school. Ever since then I and my Art Foundation have been actively involved in music education back home in Britain. It will be a joy to discover and work with talented musical kids in the USA and, who knows, maybe discover a rock star or three of the next generation.”