Onstage Seating Available for 'A View from the Bridge' 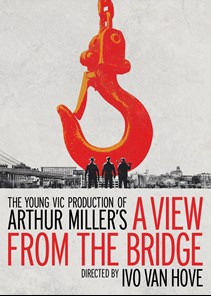 Beginning Monday, August 24, onstage seating is now available for the Young Vic’s critically-acclaimed production of Arthur Miller’s A VIEW FROM THE BRIDGE directed by Ivo van Hove, which producers Scott Rudin and Lincoln Center Theater will bring to Broadway this fall. For a more immersive experience, audiences are now able to purchase onstage seats, located on two sides of the stage, for $50 each during previews ($135 each after opening). The view from these seats will be unrestricted and audience members will have a unique opportunity to be right beside the action onstage.

Direct from two completely sold-out engagements in London, where it swept the 2015 Olivier Awards winning for Best Revival, Best Director, and Best Actor (Mark Strong), A VIEW FROM THE BRIDGE will begin previews Wednesday evening, October 21 for an 17-week limited engagement through Sunday, February 21, 2016, at the Lyceum Theatre, 149 West 45 Street. Opening night for A VIEW FROM THE BRIDGE, which is being presented during playwright Miller’s centenary and will make the Broadway debut of the acclaimed Belgian director van Hove, is Thursday, November 12.

Tickets for A VIEW FROM THE BRIDGE are now available by calling Telecharge at (212) 239-6200 or by visiting telecharge.com.

The cast of A VIEW FROM THE BRIDGE — Arthur Miller’s dark and passionate classic drama set on the Brooklyn waterfront — will be headed by Mark Strong (as Eddie Carbone), Nicola Walker (as Eddie’s wife Beatrice), Phoebe Fox (as his niece Catherine), Russell Tovey (as Rodolpho), Emun Elliott (as Marco), Michael Gould (as Alfieri), and Richard Hansell (as Louis). The production has scenic and lighting design by longtime van Hove collaborator Jan Versweyveld, costume design by An D’Huys, and sound design by Tom Gibbons.

The Young Vic production of A VIEW FROM THE BRIDGE premiered in April 2014 to ecstatic reviews and instantly sold out its initial engagement. The production subsequently transferred to London’s West End where it recently concluded another completely sold-out run.
A VIEW FROM THE BRIDGE received unanimous raves from the London critics. The Guardian described it as “a visceral, vital reinterpretation of a classic play . . . a forceful production of visual brilliance,” adding, “there have been plenty of productions of A View from the Bridge but you’ve never seen it staged like this.” The Financial Times called the show “a superb, searing production. The actors are all magnificent.” The production was also hailed by The Independent as “unforgettable,” and by the Evening Standard as “astonishingly bold and magnificent.” The Variety called it “Entrancing and electrifying. A catharsis only theatre can muster. You daren’t blink. This is theatre as an out of body experience.”