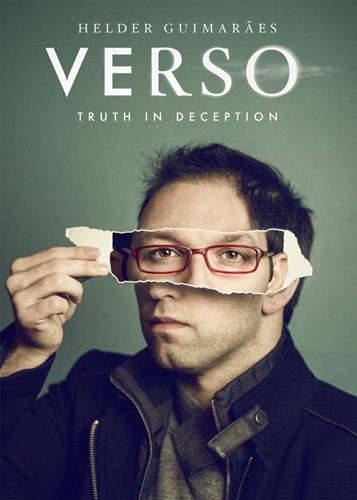 One of the World’s Greatest Close-Up Magicians

Returns to New York City in an All New Show

Don’t blink. There are lies in every reality. Truth in every deception.

What is real? What is impossible? What do you believe?

Helder Guimarães, one of the premier close-up artists of the world, returns to New York City in his all-new show Verso, following the acclaimed sold-out engagement of Nothing to Hide. Intimate and enigmatic, witty and unorthodox, Verso is Helder’s most daunting journey into the impossible yet.  Bear witness as he pushes the very limits of magic, and challenges just how much you’re willing to accept what your eyes assume to be true.

Verso had its world premiere in Portugal earlier this year playing the Teatro do Bolhão in Porto on January 14, 2016 and then the Teatro da Trindade in Lisboa on January 20, 2016. This will be the American premiere of Verso.

In March 2014, Helder Guimarães was invited to demonstrate his unique talents for the prestigious TED Talks. Click here to watch his “Talk,” titled “A magical search for a coincidence.”

“One of the brightest thinkers and performers of his generation.” – Magic Magazine

“Open your mind to a hidden world.” – Los Angeles Magazine

In 2006, at the age of 23, Helder Guimarães became the youngest ever World Champion of Card Magic. He was awarded the title after his performance in a triennial competition, which left both the judging panel and over a thousand other performers utterly baffled. Since then, using his background in acting and theater, he created and performed his one-man shows all over the world. Helder has also worked as a magic consultant for several TV projects, including “The Tonight Show,” and for theatrical productions such as Harold Pinter’s The Dumb Waiter and William Shakespeare’s A Midsummer Night’s Dream. Helder’s work has been widely recognized by his peers and described as “a thespian’s stage approach without theatrics” and “universally lauded, continuing the esteemed lineage.” Magic Magazine considered Helder “one of the brightest thinkers and performers of his generation.” His appearances at the Magic Castle led him to be awarded the title of Parlour Magician of The Year in 2011 and 2012 by the Academy of Magical Arts in Hollywood. In 2012, his show Nothing to Hide opened at the Geffen Playhouse and was directed by Neil Patrick Harris. After critical acclaim, in 2013, the show was taken Off Broadway where it stayed for a very successful held-over run of 110 performances. Helder was one of the invited guests for the prestigious TED Conference in 2014. According to TED, Helder is recognized by “his elegantly thought-through performances, which merge a nuanced stagecraft with good old how-does-he-do-it sleight of hand… silently plotting to blow your mind with invisible technique, unorthodox psychology and fresh humor.” In February 2016, he opened Borrowed Time in Los Angeles, the first immersive magic experience ever designed. It ran for 4 sold-out months and was critically acclaimed. LA Weekly called it, “The best magical performance you might ever see in LA,” and The Los Angeles Times picked it as a Critic’s Choice and called it, “Hip and Sophisticated!”, “Exceptionally Clever!” and “Astonishing!” His professional activity is divided between this artistic, performance-based component and an educational one. Helder also travels around the world as an instructor/consultant offering training based on his experience in the manipulation of perceptions to help companies in areas such as communication and marketing. He currently lives in Los Angeles, California.