'Once' Plays its Final Broadway Performance on January 4 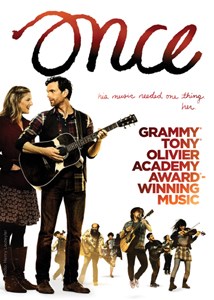 From the very first note, Once draws you in and never lets go. This emotionally captivating musical is the only show on Broadway to have music that won the Academy Award®, Grammy Award®, Olivier Award and Tony Award®. The New York Post says, this “gem of a show wins its standing ovations the old-fashioned way: with a love story, great songs, compelling characters and inventive stagecraft.”

Set in modern day Dublin, Once is the story of a Guy who gave up on his music—and his love—and the Girl who inspired him to dream again. This exhilarating musical is performed by an extraordinary cast of actor-musicians who sing, dance and play their hearts out on stage. Directed and choreographed by the brilliant team of Tony Award-winner John Tiffany and Steven Hoggett (The Glass Menagerie), this theatrically breathtaking production will dazzle you with its originality, wit and unforgettable music.

Featuring all of the magical songs from the critically-acclaimed film, including the Oscar-winning “Falling Slowly,” this achingly beautiful, joyously uplifting show strikes an unforgettable chord in audiences and speaks to the power of music to connect us all. A show like that only comes around Once.

Once Tickets | Once Schedule