OH, HELLO ON BROADWAY Opens This Fall at the Lyceum 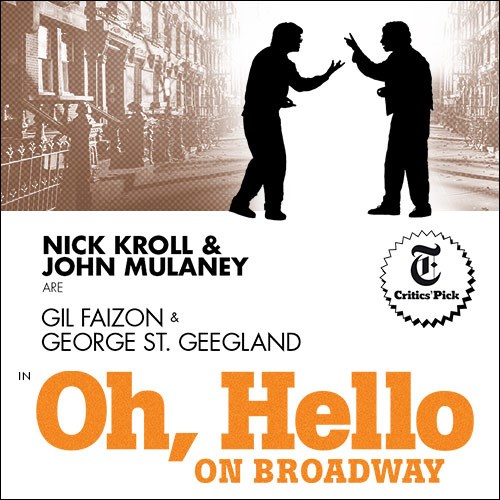 Finally Get Their Names in Lights

Opening October 10 at the Lyceum Theatre

Nick Kroll and John Mulaney announced today that at long last, their wildly popular alter egos Gil Faizon and George St. Geegland will make their debuts on The Great White Way in their acclaimed masterpiece, OH, HELLO on BROADWAY at The Lyceum Theatre (149 West 45th Street).

Performances for OH, HELLO on BROADWAY will begin on Friday September 23 with opening night set for Monday October 10. The show will run through January 8 2017. Alex Timbers directs.

OH, HELLO on BROADWAY is the Broadway premiere of two of the two hottest voices in comedy today, Nick Kroll (Comedy Central's "Kroll Show") and John Mulaney (Netflix's "The Comeback Kid"). The Hollywood Reporter calls Kroll and Mulaney "the funniest comic duo of their generation!"

Respectively, the duo star as Gil Faizon and George St. Geegland - outrageously opinionated, 70-something, native New Yorkers that Kroll and Mulaney first began performing on the alternative comedy stages in NYC. Honed for over a decade, the fictional duo garnered a cult following and found their way onto a Comedy Central special, viral videos and late night couches everywhere. OH, HELLO on BROADWAY is Gil and George's "memoir for the stage" - a laugh-a-minute two-man tour-de-force that's part scripted, part spontaneous comedy, and totally unprecedented.

St. Geegland and Faizon have spent their entire lives second-acting Broadway shows and could not be more thrilled to make their Broadway bows. When reached for comment, George said, "This is the furthest dun'town we have been in years and we are not happy about it." Gil added, "I'm terrified. I have to go to the bathroom."

OH, HELLO quickly sold out an off-Broadway run last fall, prompting New York Magazine to declare, "For a few short weeks, Hamilton had a rival for the title of hottest ticket in town in the form of two old jerks from the Upper West Side." The duo played other sold out engagements in San Diego, Boston, Washington DC, San Francisco, Chicago and Los Angeles.

Ben Brantley in the New York Times called the show, "A hoot. The noise from the audience throughout their performance - that of people blind drunk on their own laughter - suggests that the roster of cool theater has now been swelled by the uncoolest dudes on the planet."

Prior to Broadway, Gil and George will perform at Montreal's Just for Laughs Festival.

GEORGE ST. GEEGLAND was born in Newark, NJ to verbally abusive parents sometime in the early mid 1940s. In 1971 he published his first novel Rifkin's Dilemma, a real 70's novel about masturbation and such. It has aged terribly. St. Geegland taught creative writing for 12 years at SUNY Yonkers - Go Zebras! - until he was fired for stuff that is in sealed documents. Along with Gil Faizon he is the co-author and co-star of several plays as well as the hit television show "Too Much Tuna" as seen on Comedy Central's "Kroll Show." Spalding Gray personally disliked him and he has chapped hands.

GIL FAIZON currently works as a stand-in model for mashed potatoes and other creamed foods. So like when they're photographing mashed potatoes, Gil lies there so they can get the lighting right. His bar mitzvah theme was the color brown.

NICK KROLL (Author/ Gil Faizon) Nick Kroll is the creator and star of the critically acclaimed series "Kroll Show," which aired on Comedy Central, and he co-starred as 'Ruxin' in the hit FX series, "The League." He has also had memorable guest starring roles on "New Girl," "Parks and Recreation," "Community" and Children's Hospital. In 2013, Kroll was honored with the BREAKOUT STAR OF THE YEAR award at the Just For Laughs Comedy Festival in Montreal. He will next be seen on the big screen in Jeff Nichols' upcoming feature Loving, which premiered at the 2016 Cannes Film Festival, as well as the New Line feature The House. He has voiced roles for several animated films awaiting release, including Seth Rogen's Sausage Party, Illumination's Sing and Dreamworks' Captain Underpants. Kroll also has a new animated series titled "Big Mouth," which is based on his own teenage adventures in puberty, coming to Netflix in 2017.

JOHN MULANEY(Author/ George St. Geegland) is an Emmy Award winning writer and comedian. He most recently released his 3rd hour stand up special a Netflix Original titled "The Comeback Kid" which the AV Club called "his best hour of his career." He began his career in New York's East Village hosting "The Oh Hello Show" alongside Nick Kroll. In 2008, he began working at "Saturday Night Live" where he appeared as a "Weekend Update" correspondent and co-created characters such as "Stefon" with Bill Hader. He currently writes for IFC's "Documentary Now" and for Netflix's "Big Mouth" on which he voices the character of Andrew. Mulaney's first comedy special, "The Top Part," was released in 2009 and reviewed as "a finely-crafted piece of work" by The Huffington Post. He released his second Comedy Central special and album "New In Town" in 2012, and upon review EW.com hailed Mulaney as "one of the best stand-up comics alive."

PATRICK CATULLO (Producer) Broadway, national tour and West End credits include Fully Committed starring Jesse Tyler Ferguson and directed by Jason Moore, the recent revival of The Elephant Man starring Bradley Cooper (Tony nomination and Drama Desk Award), Gypsy starring Imelda Staunton (Olivier Award), Hedwig and the Angry Inch (Tony, Drama Desk and Outer Critics Circle Awards, Best Revival of a Musical), If/Then starring Idina Menzel, the Pulitzer Prize-winning musical Next to Normal (Tony nomination) and The 25th Annual Putnam County Spelling Bee (Tony nomination). After graduating Yale, Patrick worked for the Roundabout Theatre Company before going on to serve as the associate to producer David Stone on many productions including blockbuster Wicked and the original production of The Vagina Monologues off-Broadway. He is a member of The Broadway League and active on the Young Audiences Development Task Force.

MARCIA GOLDBERG (Producer) is currently represented on Broadway with Fully Committed starring Jesse Tyler Ferguson. She began her career working for the legendary David Merrick on the original production of 42nd Street. A partner of 321 Theatrical Management, Marcia is an executive producer of Wicked. Associate Producer: All Shook Up. Other credits include Fun Home, If/Then, Peter and the Starcatcher, Sister Act, Next to Normal, 25th Annual Putnam County Spelling Bee, Rent, Prelude to a Kiss, A Funny Thing Happened on the Way to the Forum, How to Succeed in Business Without Really Trying, Guys and Dolls, The Diary of Anne Frank, Once Upon a Mattress, Eric Bogosian's "Sex, Drugs and Rock & Roll. Marcia is a member of the Broadway League.