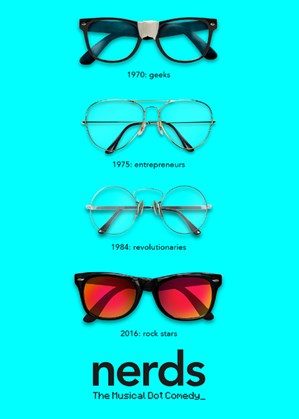 Broadway opens its GATES to the nerds who can get the JOBS done right.

AT THE LONGACRE THEATRE

Before Bill Gates and Steve Jobs were the undisputed titans of technology, they were NERDS. Join America’s favorite garage inventors on a hilarious musical journey from the floppy disc era to the iPhone phenomenon, and the epic competition in between, that would revolutionize modern culture as we know it. Fittingly, the production will feature the most progressive technology seen on Broadway, including: on-stage holograms; projection mapping; and an enhanced theatergoing experience through app integrations that allow users to interact with the set and other audience members, choose the show’s ending, and more special features soon to be announced.

“We’re thrilled to add a jolt of comedy to this already astounding theater season, with this hilarious tale of the Founding Fathers of Tech, from a creative team stacked with new voices,” said producer Carl Levin. “While fine-tuning and re-coding the show for this exciting launch, we’ve also been exploring innovative ways to enhance the ‘user experience’ inside the theater, for a uniquely entertaining event – compatible for Broadway audiences of all generations.”

NERDS was first presented by the Philadelphia Theatre Company, where it received Barrymore Awards for Outstanding Original Music and Outstanding New Play. In 2013, the show played limited engagements at North Carolina Theatre and again at Philadelphia Theatre Company where it received seven Barrymore Award Nominations. The Philadelphia Inquirer called NERDS "generation defining,” “visually hot and musically adept filled with one knockout, high-velocity number after a number” and “with surgical precision [like] How to Succeed meets Urinetown, NERDS nails such themes as the cost of dreams and the emptiness of revenge. And, is full of class, insight and wit.”

JORDAN ALLEN-DUTTON and ERIK WEINER (Book & Lyrics) are long-time friends and writing partners whose collaboration began at NYU where they co-created and starred in The Bomb-itty of Errors, a hip-hop musical adaptation of Shakespeare’s comedy, which went on to Off-Broadway (1999), the West End (2002), and continues to play around the world. From the success of Bomb-itty, Jordan and Erik were invited to the Sundance Screenwriting Lab and co-created and starred in the MTV sketch comedy series, Scratch & Burn. Together, they’ve written on 5 seasons of the Emmy-winning series, Robot Chicken, including the Star Wars Special, and have been nominated for three Emmys for their writing.

JORDAN graduated from Tisch at NYU in '99 as a recipient of the Artist Scholar Award. He has also created original pilots for FOX, Comedy Central, Sony and Disney. He lives in Los Angeles with his lovely wife Mesha and amazing daughter, Lavinia.

ERIK won a Peabody Award for his writing on CNN Heroes. As an actor, he won a SAG Award playing Agent Sebso on HBO's "Boardwalk Empire”. Other roles include “Unscripted”, “Brown Sugar”, “The New Normal”, and he had one line on “The Sopranos”. He lives in LA with his wonderful wife, Kerry, and delightful daughter, Roxy.

HAL GOLDBERG (Composer) received Barrymore Awards for Outstanding New Play (with book/lyric writers Jordan Allen-Dutton and Erik Weiner) and Outstanding Original Music for his work on the 2007 Philadelphia Theatre Company production of "NERDS". "NERDS" has also received productions at the Experimental Theater Wing at NYU, the New York Stage & Film Festival at Vassar, the New York Music Theatre Festival, North Carolina Theatre, and a return engagement at the Philadelphia Theatre Company (2013).  Hal was also the composer of the musical "THE CHILDREN" (with book/lyric writer Stan Richardson), which was presented as part of the New York Music Theatre Festival, NYMF, in 2006. Hal lives in New York City with his husband, Tim, and proudly serves as Vice President of Theatre Operations for Jujamcyn Theaters.

CASEY HUSHION (Director) Broadway: Associate Resident Director of Disney’s Aladdin, Associate/Assistant Director of Elf (2014, 2010), In The Heights (Broadway, Nat’l Tour), The Drowsy Chaperone (Broadway, Nat’l Tour, West End), To Be or Not to Be, Good Vibrations. Casey is the Artistic Director of North Carolina Theatre (2009-present) where she has directed 19 productions. Off Broadway, Casey directed Fat Camp at the ATA Theatre. She was also Associate Director of Anyone Can Whistle at Encores and Minsky’s at the Ahmanson. Many regional productions, workshops, readings, festivals and concerts. NYU Graduate. Proud mom of Lincoln, Violet and Jane, all impossible without Marc. TYMS.

JOSHUA BERGASSE (Choreographer) won the Emmy Award for Outstanding Choreography for NBC's "Smash." Theatre credits include: On The Town (Broadway); Little Me and It's A Bird..It's a Plane..It's Superman! (City Center Encores!); Guys and Dolls and the Sound of Music (Carnegie Hall); The Bomb-itty of Erroes and Captain Louie (Off-Broadway); Fame the Musical (tour); Bull Durham (Alliance Theatre); Nerds (Philadephia Theatre Company, Barrymore nomination); Secondhand Lions (Fifth Avenue Theatre); West Side Story (Stratford Festival); On The Town, Guys and Dolls, Carousel, and The World Goes 'Round (Barrington Stage). Also for television, Bergasse choreographed for FOX's "So You Think You Can Dance."

LEE SAVAGE (Scenic Design) New York credits include The Dream of the Burning Boy and Ordinary Days at Roundabout; Oohrah! at the Atlantic Theater Company; Muscles In Our Toes, Sunset Baby, and Thinner Than Water at Labyrinth; Collapse at the Women’s Project; All-American at LCT3.  Regionally, his work has been seen at Asolo Rep, Chautauqua Theater Company, Dallas Theater Center, Ford’s Theatre, Glimmerglass, Goodman, Guthrie, Long Wharf, Shakespeare Theatre Company, Washington National Opera, Westport Playhouse, and Yale Rep among others. Mr. Savage received a Helen Hayes Award for his work on Much Ado About Nothing and nominations for A Midsummer Night’s Dream and Richard III at Shakespeare Theatre Company, as well as a Connecticut Critics Circle Award for The Intelligent Design of Jenny Chow at Yale Rep. He is a Member of Wingspace Theatrical Design and a contributing editor for Chance Magazine. He received his BFA from the Rhode Island School of Design and MFA from the Yale School of Drama, where he is currently on faculty.

DANIEL BRODIE (Projection Design) was born in Las Vegas and now lives in Brooklyn. He graduated with a degree in theatre and media design from the Herberger Institute for Design and the Arts at Arizona State University. He designed the projections for Christopher Wheeldon's Winter’s Tale (Royal Ballet) and Cinderella (Dutch National Ballet and San Francisco Ballet) and has worked regularly with puppeteer Basil Twist, both on The Winter's Tale and Cinderella and on Twist’s Behind the Lid, Arias with a Twist and The Rite of Spring. Brodie’s Broadway credits have included Motown the Musical, Jekyll & Hyde and Disney’s Aladdin. He has also created large-scale video designs for Kanye West, Mariah Carey and for the Bonnaroo Music and Arts Festival. Brodie's awards include the United States Institute of Theatre Technology’s Rising Star Award (2011). He has also worked as a guest lecturer at Yale University and New York University. He is an artist in residence at the New York City IFP Media Center.

ADAM BLAU (Orchestrations). Film credits include: Spy, License to Wed, The Overbrook Brothers, Phoebe in Wonderland, and Fuzz Track City, School for Scoundrels, and Smother among others. Television: “Funny or Die’s Billy on the Street” on TruTV/TBS and “You’re the Worst” on FX. In addition to music directing and arranging for numerous stage productions, Adam composed the cult favorite Monica! the Musical, a full-length musical comedy that satirically retold the Monica Lewinsky scandal. Adam has played piano and keyboards with rock bands in venues ranging from Irving Plaza in New York to the House of Blues in Las Vegas. Adam is a graduate of Yale University and former musical director of the Yale Whiffenpoofs.

MATT DOEBLER (Music Director) Matt has played keyboards and conducted for Wicked and Book of Mormon on Broadway, as well as their respective national tours, and Natasha, Pierre & The Great Comet of 1812’s Off-Broadway run and recent a.r.t production. Recent Broadway and Off-Broadway shows include: Les Miserables, Gigi, Annie, Leap of Faith and Heathers. BFA: Penn State School of Music (where he is currently on faculty).