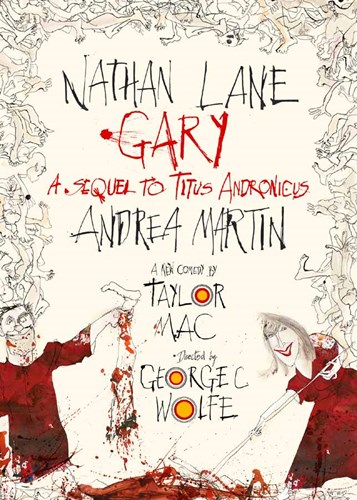 Taylor Mac, (who uses "judy," lowercase sic, not as a name but as a gender pronoun) is one of the most exciting theater artists of our time. Gary: A Sequel to Titus Andronicus marks Mac's highly anticipated Broadway debut. Mac is the conceiver/author/star of one of the most decorated and talked-about American cultural events in recent memory, A 24-Decade History of Popular Music, as well as the author of the acclaimed play, Hir, and a MacArthur Fellow.

In Gary, Taylor Mac's singular world view intersects with Shakespeare's first tragedy, Titus Andronicus. In Mac's extraordinary new play, set during the fall of the Roman Empire, the years of bloody battles are over. The civil war has ended. The country has been stolen by madmen, and there are casualties everywhere. And two very lowly servants - Lane and Martin - are charged with cleaning up the bodies. It's only 400 B.C. - but it feels like the end of the world.

Additional casting will be announced soon.

Taylor Mac (Playwright) (who uses "judy"-lowercase sic-as a gender pronoun) is a theater artist whose work has been performed at New York City's Town Hall, Lincoln Center, and Playwrights Horizons; London's Hackney Empire and Barbican; D.C.'s Kennedy Center; Los Angeles's Royce Hall and Ace Theater (through the Center for the Art of Performance); Chicago's Steppenwolf; Australia's Sydney Opera House and Melbourne Festival; Stockholm's Sodra Theatern; San Francisco's Curran; and hundreds of other theaters, museums, music halls, opera houses, cabarets, and festivals around the globe. Mac is the author of seventeen full-length works of theater including, A 24-Decade History of Popular Music, Hir, The Walk Across America for Mother Earth, The Lily's Revenge, The Young Ladies Of, Red Tide Blooming, and The Be(A)st of Taylor Mac. Sometimes Taylor acts in other people's plays (or co-creations). Notably: Good Person of Szechwan (La Mama and The Public Theater), A Midsummer's Night Dream (Classic Stage Company), and The Last Two People on Earth (American Repertory Theater), a two-person vaudeville opposite Mandy Patinkin and directed by Susan Stroman. Mac is a MacArthur Fellow, a Pulitzer Prize Finalist for Drama and the recipient of multiple awards including the Kennedy Prize, two Helpmann Awards, a New York Drama Critics Circle Award, a Doris Duke Performing Artist Award, a Guggenheim Fellowship, the Herb Alpert in Theater, the Helen Merrill Playwriting Award, two Bessie Awards, two Obie Awards, and an Ethyl Eichelberger Award. An alumnus of New Dramatists, judy is currently the resident playwright at the Here Arts Center.

George C. Wolfe (Director) is the winner of five Tony Awards, including two for Best Director for Angels in America: Millennium Approaches, which received the Tony for Best Play, and for Bring in 'Da Noise, Bring in 'Da Funk, for which he also received the Drama League Award. His other theater directing credits include The Iceman Cometh (Tony nomination); Shuffle Along, or, the Making of the Musical Sensation of 1921 and All That Followed (New York Drama Critics Circle and Drama Desk Awards for Best Musical); Lucky Guy; The Normal Heart (Drama Desk for Best Director, Tony for Best Revival of a Play); Jelly's Last Jam (Drama Desk and Outer Critics Circle Awards for Best Book of a Musical); Angels in America: Perestroika (Drama Desk for Best Director, Tony for Best Play); Topdog/Underdog (Obie Award); Twilight: Los Angeles, 1992; Elaine Stritch At Liberty (Tony for Best Special Theatrical Event); The Tempest; The Wild Party; Caroline, or Change; and A Free Man Of Color. He is the writer of the award-winning The Colored Museum and Shuffle Along..., directed and adapted Spunk (Obie), created Harlem Song for the Apollo Theatre, and conceived and directed a celebration of the American Musical at the White House. Mr. Wolfe recently directed and co-wrote the HBO film The Immortal Life of Henrietta Lacks, as well as the HBO film Lackawanna Blues, for which he earned The Directors Guild Award, a National Board of Review Award, an Independent Spirit nomination for Best First Feature, a Christopher Award, and The Humanitas Prize. From 1993-2005 he served as the Artistic Director and Producer of The Public Theater, and he is the Chief Creative Officer for the Center for Civil and Human Rights. Additional awards include The Actors' Equity Paul Robeson Award, The Society of Directors and Choreographers' "Mr. Abbott" and Joe A. Calloway Awards, The Dramatists Guild's Hull-Warriner Award, The New Dramatists' Outstanding Career Achievement Award, The NAACP Lifetime Achievement Award, The Lambda Liberty Award, The Spirit of the City Award, The Brendan Gill Prize, The Distinguished Alumni Award from New York University, and a Princess Grace Award for fostering the careers of young artists. Mr. Wolfe was named a Library Lion by the New York Public Library, and a living landmark by the New York Landmarks Conservancy.

Andrea Martin (Janice). Heralded as "one of the funniest women on Broadway" by the New York Times, Andrea Martin is a multi-talented award-winning actress who won the Tony Award, Drama Desk Award, and Theatre World Award for her Broadway debut in My Favorite Year. She has since become the featured actress with the most Tony Award nominations in a musical, with a record number for her performances in Candide (Drama Desk Award nomination), Oklahoma! (Drama Desk and Outer Critics Circle Award nominations), Young Frankenstein (Drama Desk Award nomination), and Pippin for which she received Tony, Drama Desk, Outer Critics Circle, Elliot Norton, and IRNE Awards. Her most recent Broadway appearance in the revival of Noises Off earned her an additional Tony Award nomination. Martin has also been seen on stage in the revival of Exit the King (Drama Desk and Outer Critics Circle Award nominations), in the Broadway adaptation of Moss Hart's Act One (Outer Critics Circle Award), which also aired on PBS, and in her one-person play Nude Nude Totally Nude (Drama Desk Award nomination). Martin received two Emmy Awards for writing and an Emmy Award nomination for Best Supporting Actress in a Variety Series for her work on the legendary sketch comedy show "Second City Television." She also received a special Emmy Award for her contributions on "Sesame Street" and had her own special for Showtime, "Andrea Martin, Together Again." Her additional television appearances include "Hairspray Live!," "Modern Family," "Unbreakable Kimmy Schmidt," and "30 Rock." She recently completed her simultaneous runs on the NBC comedy series "Great News" and the Hulu series "Difficult People." Currently, she can be seen on the CBS All Access series "The Good Fight." Martin's film appearances include Cannibal Girls, Club Paradise, Stepping Out, All I Want for Christmas, Wag the Dog, Hedwig And the Angry Inch, All Over the Guy, Night at the Museum 3, My Big Fat Greek Wedding (Screen Actors Guild Award nomination for Best Ensemble and People's Choice Award), and the sequel My Big Fat Greek Wedding 2. She recently received a star on the Canada Walk of Fame. Her critically acclaimed book