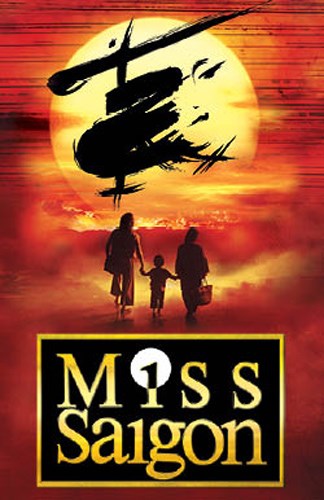 Cameron Mackintosh announced today that his acclaimed new production of Boublil and Schönberg’s legendary musical MISS SAIGON – a recent smash hit in London - will return to New York at its original home, The Broadway Theatre (1681 Broadway) beginning performances Wednesday, March 1. The original production of MISS SAIGON opened at the same theater on April 11, 1991 and played there through January 28, 2000.  Directed by Laurence Connor (Les Misérables, School of Rock), the Broadway return of MISS SAIGON will feature its American stars, Jon Jon Briones as The Engineer and 20-year-old  Eva Noblezada as Kim, who created these roles in the West End to great acclaim.  Ms. Noblezada was discovered three years ago by the MISS SAIGON casting team at the National High School Musical Theater Awards, also known as the Jimmy Awards in honor of the legendary James Nederlander, who passed away last week. Opening night for MISS SAIGON will be Thursday, March 23.  MISS SAIGON will play a limited engagement through January 14, 2018 before launching a North American tour later in the year.  Additional casting will be announced in the coming weeks.

Cameron Mackintosh said, “It’s hard to believe that it has been 25 years since MISS SAIGON first opened in New York, but if anything, the tragic love story of the show has become even more relevant today with the conflicts in Syria, Afghanistan and Iraq.  This new production, directed by Laurence Connor, takes a grittier, more realistic approach than the original production while still delivering the power and epic sweep of Boublil and Schönberg’s tremendous score.  Of all my shows, MISS SAIGON is the one that I have received the most requests from the public to bring back, and I am thrilled that Broadway audiences will get to see this tremendous new production that audiences and critics in London have embraced since it opened in 2014.  And I am delighted that our wonderful London stars, Jon Jon Briones and Eva Noblezada, will be bringing their stunning performances across the Atlantic.  Audiences who can’t wait will get a preview of the scale of this wonderful production at forthcoming screenings of the MISS SAIGON 25th Anniversary Performance which was filmed live in London, in selected screens across America on September 22.”

The new London production of MISS SAIGON opened in London in May 2014 to record-breaking advance sales and critical acclaim. Dominic Cavendish in The Daily Telegraph wrote, “This thrilling new production spills out beyond the theater and speaks directly to the times we live in – magnificent performances.”  Dominic Maxwell in The Times called the production “thrilling, soaring and spectacular.” The reviews for its stars were also raves.  David Benedict in Variety wrote, “In an astonishing stage debut, Eva Noblezada gives a thrilling performance as Kim, with poise, power and a superb voice.”  And Dominic Maxwell in The Times said Jon Jon Briones plays the Engineer with “brilliant, avaricious charm.”

MISS SAIGON swept the board at the 2015 Whatsonstage.com awards winning a record breaking nine awards, the most awards ever won by a single show in the 15-year history of the awards including: Best West End Show; Best Revival of a Musical; Best Leading Actress in a Musical (Eva Noblezada) and Best Leading Actor in a Musical (Jon Jon Briones).

MISS SAIGON has music by Claude-Michel Schönberg with lyrics by Richard Maltby Jr. and Alain Boublil, adapted from original French lyrics by Alain Boublil, with additional lyrics by Michael Mahler. The new production is directed by Laurence Connor with musical staging by Bob Avian and additional choreography by Geoffrey Garratt.  Production design is by Totie Driver and Matt Kinley based on an original concept by Adrian Vaux; costume design by Andreane Neofitou; lighting design by Bruno Poet; sound design by Mick Potter; and orchestrations by William David Brohn.

Since its London premiere in 1989, Cameron Mackintosh’s production of Alain Boublil and Claude-Michel Schönberg’s epic musical MISS SAIGON has become one of the most successful musicals in history.  The original Broadway production of MISS SAIGON opened on April 11, 1991 with what was the largest advance sale in Broadway history ($37 million).  The show went on to play for nearly ten years and 4,063 performances seen by more than 5.9 million people.   MISS SAIGON has been performed in 28 countries, over 300 cities in 15 different languages, has won over 40 awards including 2 Olivier Awards, 3 Tony Awards, and 4 Drama Desk Awards and been seen by over 35 million people worldwide.

Tickets for MISS SAIGON will be available to American Express card-holders exclusively beginning Sunday, August 21; to Audience Rewards members beginning Tuesday, September 6; and to the general public starting Monday, September 12 at Telecharge.com. Group tickets are available at SaigonBroadway.com or (800) 432-7780.