Mike Birbiglia's THE NEW ONE Comes to Broadway 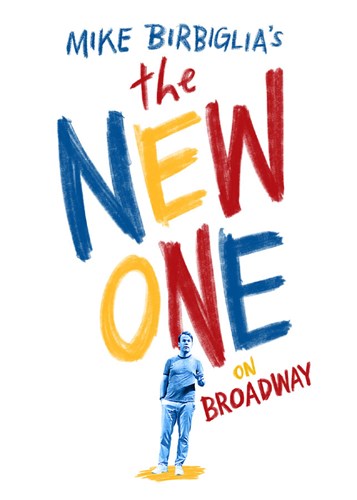 MIKE BIRBIGLIA'S THE NEW ONE

Comes to Broadway for 9 Weeks Only

at the Cort Theatre

Following an acclaimed off-Broadway run that sold-out immediately, Mike Birbiglia's The New One will move to Broadway at the Cort Theatre (138 West 48th Street). Preview performances will begin on October 25, 2018 with the official opening set for November 11, for a limited engagement through January 20, 2019. Tickets are on sale now through www.telecharge.com 212-239-6200.

Written by Mike Birbiglia, with additional writing by Jennifer Hope Stein, The New One is a new play directed by Seth Barrish (The Barrow Group) with set design for Broadway by Beowulf Boritt (Bernhardt/Hamlet, Come From Away), lighting design by Aaron Copp (Kennedy Center, Lincoln Center), and sound design by Leon Rothenberg (The Waverly Gallery). Mike Birbiglia's The New One will be produced on Broadway by Kevin McCollum (Rent, Avenue Q, In The Heights). This American Life's Ira Glass is Executive Producer. Joe Birbiglia is Associate Producer and Mike Lavoie is Production Consultant.

Mike Birbiglia said, "I'm so excited to be bringing The New One to The Cort Theater on Broadway which is where I saw the great Kenneth Lonergan play This Is Our Youth. Which is fitting because this show is about somebody's youth. Not mine. But somebody's! I won't tell you any more than that. The truth is I try not to tell people anything about my new show because, I find, the less you know about the show the more you will enjoy it. My goal is to make as many people laugh as possible and ideally several hundred will cry. My producer Kevin McCollum and the Shubert Organization are letting me do that in a space that will accommodate the right amount of people. Which is about 1,100. I'm pretty sure there are union regulations about entertaining more than 1,100 people at once. So we will limit it to 1,100 people laughing and 300 people crying. A lot of people thank their spouses when they make something but with this show I really do have to thank my wife, Jennifer Hope Stein, because she wrote a lot of the best lines. She's a writer on the show and that was important to me because I wanted to convey the truth about what we experienced together- which I will tell you nothing more about. But man is it gonna make you laugh. And cry. (Please abide by the union crying vs. laughing regulations.) And I'm thrilled to share this journey with my wife Jen, my director Seth Barrish and designers Beowulf Boritt, Aaron Copp and Leon Rothenberg, as well as my longtime collaborators Ira Glass and Joe Birbiglia. We're bringing this squad to a new party. Hopefully there's pizza."

In 2008, Nathan Lane introduced New York City theatergoers to Mike Birbiglia by presenting Birbiglia's solo theater debut, Sleepwalk with Me, which went on to be adapted into a New York Times bestselling book and Sundance Award-winning feature film of the same name. Since then, Birbiglia has written and performed Thank God For Jokes and My Girlfriend's Boyfriend for which he received a Lucille Lortel Award. Now he's delivered The New One.

Tickets are on sale through www.telecharge.com, 212-239-6200. The Cort Theatre box office will open on October 11. The running time is 85 minutes. For the playing schedule, please visit www.thenewone.com.

A lot of people think you should go see The New One:

John Mulaney went on to say, "I've seen all of Mike's work. This is quite possibly his best show. Go."

Zoe Kazan said "I saw The New One & I am here to tell you I laughed so hard I almost peed myself & I think you might do the same." She also said, "Go."

Non-celebrity and insightful member of the public Jennifer Prandato wrote, "I laughed so hard at @birbigs show tonight that I swung my hand up to cover my mouth and chipped my tooth with my ring and STILL couldn't stop laughing which is probably the highest praise I could ever give, so if you get the chance to see him, GO." Which also counts as a "go."

And even more critics (than those above the headline) agree:

"It is Birbiglia's disarming amiability and sharp wit that makes the performer such a treasure. He draws you in with his seemingly casual style, making the audience feel like he's telling his story for the first time and just for them." - The Hollywood Reporter

"A genius blend of confessional and observational comedy." - The New York Times

Mike Birbiglia (Performer/Writer) is a comedian, storyteller, director and actor who has performed in front of audiences worldwide, from the Sydney Opera House to Carnegie Hall. His most recent shows, My Girlfriend's Boyfriend and Thank God for Jokes, were both filmed for Netflix. In addition to performing live, Birbiglia is an author and filmmaker who wrote, directed, and starred in the films Sleepwalk with Me and Don't Think Twice. His book, Sleepwalk With Me and Other Painfully True Stories, was a New York Times bestseller and a finalist for the Thurber Prize for American Humor. As an actor, Birbiglia has appeared on "Inside Amy Schumer," HBO's "Girls" and "Broad City" as well as in the films Trainwreck, The Fault in Our Stars, and Popstar. He plays the role of Danny Pearson on "Orange is the New Black" and Oscar Langstratt on Showtime's "Billions." He is a frequent contributor to This American Life on public radio. Last year Birbiglia was honored with the Kurt Vonnegut Award for humor.

Jennifer Hope Stein (Additional Writing), aka J. Hope Stein, is the author of Occasionally, I remove your brain through your nose (Poet Republik, 2017). Her poems can be found in The New Yorker, Poetry International, Lenny Letter and In the Shape of a Human Body I Am Visiting the Earth: Poems from Far and Wide (McSweeney's and Poetry International, 2017). She was an associate producer on the film Sleepwalk With Me and consulting producer on the film Don't Think Twice.

Seth Barrish (Director) is the Co-Founder and Co-Artistic Director of The Barrow Group where he most recently directed Scott Organ's The Thing With Feathers. He directed Thank God for Jokes (Outer Critics Circle Nomination for Outstanding Solo Show, Lucille Lortel Award nomination for Best Solo Show), All The Rage (Lucille Lortel Award-winner for Best Solo Show), My Girlfriend's Boyfriend, Sleepwalk With Me (Nightlife Award for Outstanding Comedian in a Major Performance), The Tricky Part (OBIE Award-winner, Drama Desk nominations for Best Play and Best Solo Show), Pentecost (Drama Desk nomination for Best Play), Old Wicked Songs (Los Angeles Drama Critics Circle Award & Garland Award for Best Direction), and Good (Straw Hat Award for Best Direction), among dozens of productions spanning a 35-year career Off Broadway, in regional theater and internationally. Seth co-directed the feature film Sleepwalk With Me. In 2016, he co-adapted Ibsen's An Enemy of the People. Seth served as a Consulting Producer on the feature film Don't Think Twice. Seth is a professional acting and directing teacher and wrote the book, An Actor's Companion-Tools for the Working Actor, published by TCG with a foreword by Anne Hathaway. As an actor, Seth appears regularly in film and on television. Seth is also a composer (SESAC) and most proud of his affiliation with his family, Lee Brock, Phillip & Rachel Barrish.

Beowulf Boritt (Scenic Design) Broadway: Be More Chill, Act One (Tony Award), The Scottsboro Boys (Tony Nomination), Therese Raquin (Tony Nomination), Bernhardt/Hamlet, Meteor Shower, Prince of Broadway, Come From Away, Sunday in the Park with George, A Bronx Tale, Hand To God, On The Town, Sondheim On Sondheim, …Spelling Bee, LoveMusik, Rock Of Ages, Chaplin, Bronx Bombers, Grace, The Two And Only. Off-Broadway: 100 shows including The Toxic Avenger, The Last Five Years, Miss Julie and many shows at the Belmont Italian American Playhouse in the Bronx. Other designs: The Seven Deadly Sins (New York City Ballet) and the Ringling Brothers and Barnum & Bailey Circus. He received a 2007 OBIE Award for sustained excellence.

Ira Glass (Executive Producer) is the host and creator of the public radio program This American Life. He's worked with Mike Birbiglia on a bunch of projects, under various titles, but all amounting to the same job: he gives editing notes to Mike. Under that arrangement, Glass co-wrote and co-produced the film Sleepwalk with Me, co-produced Don't Think Twice, and produced the online short Fresh Air 2: Too Fast Too Furious. He's featured Mr. Birbiglia on his radio show many times.