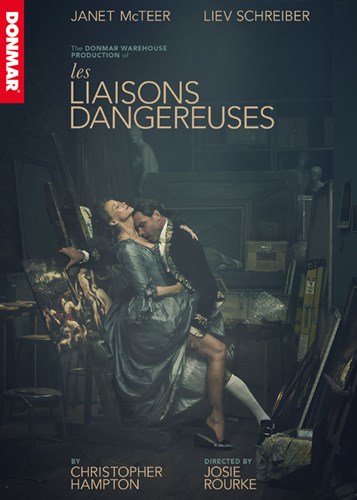 “I am delighted that Mary Beth Peil will play Madame de Rosemonde in Les Liaisons Dangereuses,” said Josie Rourke. “Her exquisite grace is in wonderful counterpoint to the electricity between Janet and Liev. I am excited to work once again on Christopher Hampton’s great play with this wonderful group of actors.”

Les Liaisons Dangereuses will be produced on Broadway by Arielle Tepper Madover.

Janet McTeer, who will play “La Marquise de Merteuil,” earned a Tony Award for her Broadway debut in A Doll’s House and a Tony Award nomination for her performance in the Donmar’s Mary Stuart. She can currently be seen in the Public Theater’s Shakespeare in the Park production of Taming of the Shrew.

Liev Schreiber, who will play “Le Vicomte de Valmont,” earned a Tony Award for his performance in Glengarry Glen Ross, and received a Tony nomination for his most recent Broadway appearance in A View from the Bridge. He stars in the hit Showtime series “Ray Donovan” which returns for its 4th season on Sunday, June 26.

Mary Beth Peil, who will play “Madame de Rosemonde,” last appeared on Broadway opposite Chita Rivera in the Kander and Ebb’s The Visit. She earned a Tony Award nomination for her Broadway debut in The King and I opposite Yul Brynner. She is also well known for her performance as Jackie Florrick on the CBS drama “The Good Wife.”

Director Josie Rourke is currently in rehearsals for The Public Theater/Donmar Warehouse co-production of Privacy. Co-conceived by James Graham and Josie Rourke, Privacy is written by James Graham and directed by Josie Rourke. She is the Artistic Director of the Donmar Warehouse where her recent productions include The Vote, which was broadcast live nationwide on television on the night of the 2015 UK election to an audience of over half a million and nominated for a BAFTA and City of Angels, which received the Olivier Award for Best Musical Revival.

Christopher Hampton earned both Olivier and Evening Standard Awards for Best New Play for the original London production of Les Liaisons Dangereuses. The play also received a New York Drama Critics’ Circle Award for Best Foreign Play. Mr.  Hampton won an Academy Award for his screenplay for the film adaptation, Dangerous Liaisons. He is currently represented in London with his new version of Zeller’s The Truth.

“THEATRE AT ITS MOST SEDUCTIVE AND SINISTER.” (Evening Standard)