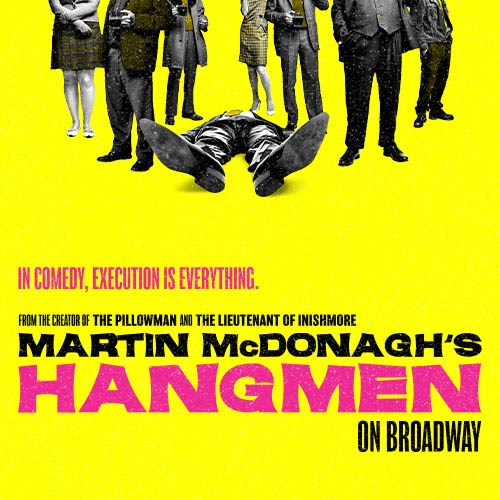 Martin McDonagh’s Hangmen, which the New York Times hailed in their “Critic’s Pick” review as a “triumphant return for Martin McDonagh,” marks McDonagh’s seventh play to be produced on Broadway and his return to the stage following his BAFTA and Golden Globe Award-winning and Oscar-nominated film Three Billboards Outside Ebbing, Missouri.

As a proud partner of Hangmen, American Express® Card Members have access to exclusive pre-sale tickets before the general public beginning Tuesday, February 1 at 10:00AM (EDT) through Thursday, February 3 at 9:59AM (EST) at Telecharge.com.

Tickets for Martin McDonagh’s Hangmen are now available at Telecharge.com, and range from $59 - $179 (including $2 facility fee).

In his small pub in the North of England in the mid-1960s, Harry is something of a local celebrity. But what’s the second-best hangman in England to do on the day they’ve abolished hanging? Amongst the cub reporters and pub regulars, people are dying to hear Harry’s reaction to the news when an intriguing stranger, Mooney, from London -with a very different wardrobe and motive - enters their world.

"Don’t worry. I may have my quirks but I’m not an animal. Or am I? One for the courts to discuss.” - Mooney

Olivier Award nominated Director Matthew Dunster’s production of Martin McDonagh’s new comedy Hangmen celebrated a sold out, critically acclaimed world premiere at London’s Royal Court Theatre in September 2015 before transferring to the West End’s Wyndham’s Theatre in 2016 and going on to win the Olivier Award for Best Play. Martin McDonagh’s Hangmen made its US Premiere at Off-Broadway’s Atlantic Theater Company on January 18, 2018, where it played a sold-out engagement through March 7, 2018, winning the New York Drama Critics' Circle Award for Best Foreign Play.  Hangmen began Broadway performances Friday, February 28, 2020, playing 13 previews at the Golden Theatre until all Broadway productions were suspended on March 12, 2020.

Martin McDonagh’s Hangmen is produced by Robert Fox, Jean Doumanian and Craig Balsam.  This production is dedicated to the memory of Elizabeth Ireland McCann.

“Martin McDonagh wants you to think, and it is his genius to do so by first making you laugh yourself silly. HANGMEN succeeds triumphantly on both counts.”

“The Most Line-By-Line Funny Play In Years.”

“McDonagh Knows How To Spin A Yarn.  Morbidly Funny! Sly, Plot-Driven, And A Nastily Good Time!”