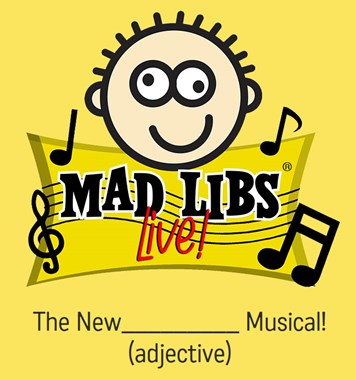 With a script and songs full of blanks that are hilariously filled in by audience members and an infectious pop score, MAD LIBS LIVE! fully embraces the anything-can-happen spirit of Mad Libs, and is the perfect musical for audiences 7 and up who want to stop being serious and start getting goofy!

In MAD LIBS LIVE! Virtuosa, Gogo, Geyser, and Merrily, four teenagers from Blankville Central High School with little in common, come together to form a singing group to try and win the title, “Teen Superstars!" MAD LIBS LIVE! is set during the live, televised competition when the teens realize that the songs they are about to sing have words missing. Thank goodness these discombobulated kids have The Audience there to help them fill in the blanks!

But...will this be enough to help them win the competition?

“When I was introduced to Mad Libs co-creator Leonard Stern some years ago, it was like meeting a rock star! While developing MAD LIBS LIVE!, my collaborator, Jeff Thomson and I worked hard to make sure that, while the show is first and foremost entertaining and interactive, it’s also educational and inspiring,” said Rothstein. “My hope for MAD LIBS LIVE! is that kids feel a sense of joy and empowerment that stays with them after they leave the theater. Or, as one kid said after our workshop – when one of the characters picked her word during the show and said it in front of the audience, it made her feel bigger. If MAD LIBS LIVE! makes lots and lots of kids feel bigger, we’ve done our job.”

"Everyone at Penguin is so excited to see MAD LIBS LIVE! The show is hysterical and really captures the essence of Mad Libs. It’s going to make everyone who sees it feel like the funniest person in the room," said Francesco Sedita, President & Publisher of Price Stern Sloan, an imprint of Penguin Young Readers Group.

Mad Libs was created by comedy writers Leonard Stern and Roger Price as an inventive and unpredictable game they played with their friends at parties. In 1958, the legendary talk show host Steve Allen used Mad Libs to hilariously introduce guests. Three days later, stores across the country had completely sold out of Mad Libs, and a star was born. Mad Libs has since become the world’s most popular word game, with over 125 million Mad Libs in print and more than 7 million downloads of the mobile app.